Five years ago, the ATLAS and CMS collaborations announced the discovery of the Higgs boson 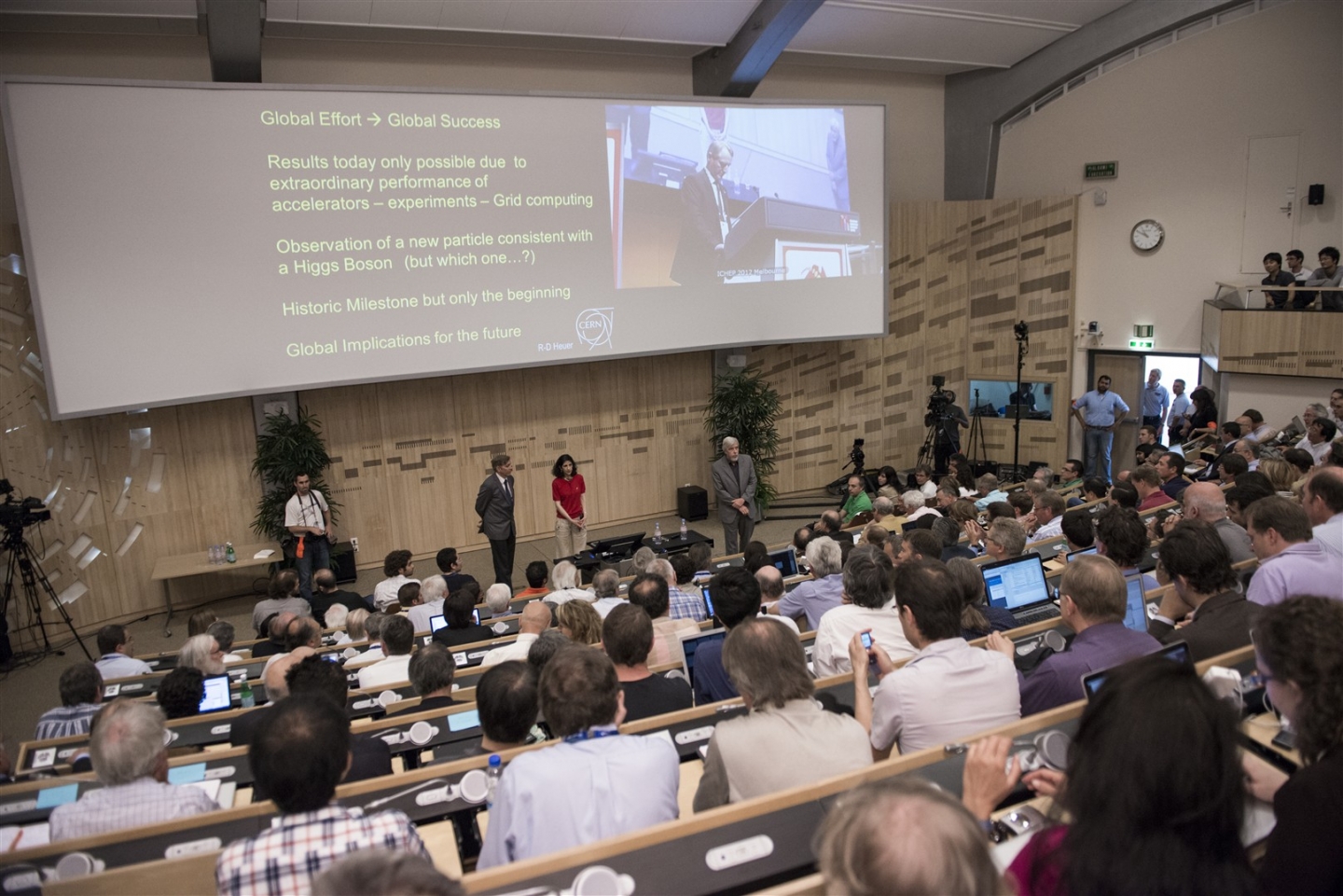 On 4 July 2012, the ATLAS and CMS spokespersons announced during a seminar at CERN that their experiments had found a particle consistent with the long sought-after Higgs boson. (Image: Maximilien Brice, Laurent Egli/CERN)

Where were you on 4 July 2012, the day in which the Higgs boson discovery was announced? Many people will be able to answer without referring to their diary. Perhaps you were among the few who had managed to secure a seat in CERN’s main auditorium, or who joined colleagues in universities and laboratories around the world at odd times of the day to watch the webcast.

“I think we have it, no?” was the question posed by the then CERN Director General Rolf Heuer on 4 July in the CERN auditorium. The answer was as obvious as the emotion on faces in the crowd. The then ATLAS and CMS spokespersons, Fabiola Gianotti and Joe Incandela, had just presented the latest Higgs search results based on roughly two years of LHC operations. Given the hints for the Higgs presented a few months earlier in December 2011, the frenzy of rumours on blogs and intense media interest during the preceding weeks, and a title for the CERN seminar that left little to the imagination, the outcome was anticipated. This did not temper excitement.

The Higgs boson is the final and most interesting particle of the Standard Model (SM). The Higgs’ connections to many of the deepest current mysteries in physics mean the Higgs will remain a focus of activities for experimentalists and theorists for the foreseeable future.

Since then, we have learned much about the properties of this new particle, yet we are still at the beginning of our understanding. In the early days it was not even clear what the mass of the Higgs boson would be: the SM cannot predict it, it just needed to be measured. Indeed, in 1975, in the first published paper describing its possible experimental signatures, the allowed Higgs mass range at that time spanned four orders of magnitude, from 18 MeV to over 100 GeV.

By 4 July 2012 the picture was radically different. The Higgs no-show at previous colliders, including LEP at CERN and the Tevatron at Fermilab, had cornered its mass to be greater than 114 GeV, while theoretical limits required it to be below around 800 GeV. Once CERN’s LHC switched on, there was very little room left to hide for the Higgs boson: if the Higgs boson had a mass with a value in that energy range, the LHC would surely have been able to produce it.

With the accelerator running it remained to observe the thing. This would push ingenuity to its limits. Physicists on the ATLAS and CMS detectors would need to work night and day to filter through the particle detritus from innumerable proton-proton collisions to select datasets of interest.  The search set tremendous challenges for the energy-resolution and particle-identification capabilities of the detectors, not to mention dealing with enormous volumes of data. In the end, the result of this labour reduced to a couple of plots. The discovery was clear for each collaboration: a significance pushing the five sigma “discovery” threshold.

Global media erupted in a science-fueled frenzy. It turns out that everyone gets excited when a fundamental building block of nature is discovered.

This article is a condensed excerpt from a feature article by Matthew McCullough, published in the CERN Courier July/August 2017 issue, which you can read in full here.

Read the stories of how people experienced the event.