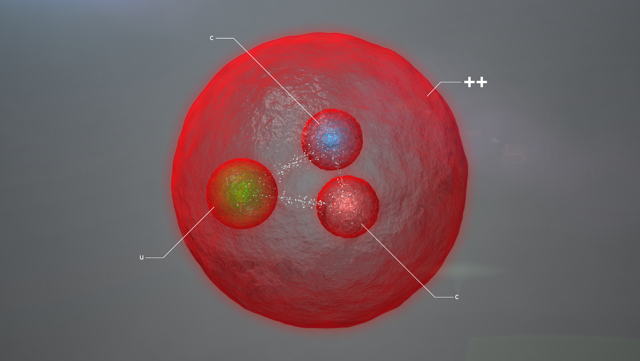 Today at the EPS Conference on High Energy Physics in Venice, the LHCb experiment at CERN’s Large Hadron Collider has reported the observation of Ξcc++(Xicc++) a new particle containing two charm quarks and one up quark. The existence of this particle from the baryon family was expected by current theories, but physicists have been looking for such baryons with two heavy quarks for many years. The mass of the newly identified particle is about 3621 MeV, which is almost four times heavier than the most familiar baryon, the proton, a property that arises from its doubly charmed quark content. It is the first time that such a particle has been unambiguously detected.

Nearly all the matter that we see around us is made of baryons, which are common particles composed of three quarks, the best-known being protons and neutrons. But there are six types of existing quarks, and theoretically many different potential combinations could form other kinds of baryons. Baryons so far observed are all made of, at most, one heavy quark.

“Finding a doubly heavy-quark baryon is of great interest as it will provide a unique tool to further probe quantum chromodynamics, the theory that describes the strong interaction, one of the four fundamental forces,” said Giovanni Passaleva, new Spokesperson of the LHCb collaboration. “Such particles will thus help us improve the predictive power of our theories.”

“In contrast to other baryons, in which the three quarks perform an elaborate dance around each other, a doubly heavy baryon is expected to act like a planetary system, where the two heavy quarks play the role of heavy stars orbiting one around the other, with the lighter quark orbiting around this binary system,” added Guy Wilkinson, former Spokesperson of the collaboration.

Measuring the properties of the Ξcc++ will help to establish how a system of two heavy quarks and a light quark behaves. Important insights can be obtained by precisely measuring production and decay mechanisms, and the lifetime of this new particle.

The observation of this new baryon proved to be challenging and has been made possible owing to the high production rate of heavy quarks at the LHC and to the unique capabilities of the LHCb experiment, which can identify the decay products with excellent efficiency. The Ξcc++ baryon was identified via its decay into a Λc+ baryon and three lighter mesons K-, π+ and π+.

The observation of the Ξcc++ in LHCb raises the expectations to detect other representatives of the family of doubly-heavy baryons. They will now be searched for at the LHC.

This result is based on 13 TeV data recorded during run 2 at the Large Hadron Collider, and confirmed using 8 TeV data from run 1. The collaboration has submitted a paper reporting these findings to the journal Physical Review Letters.