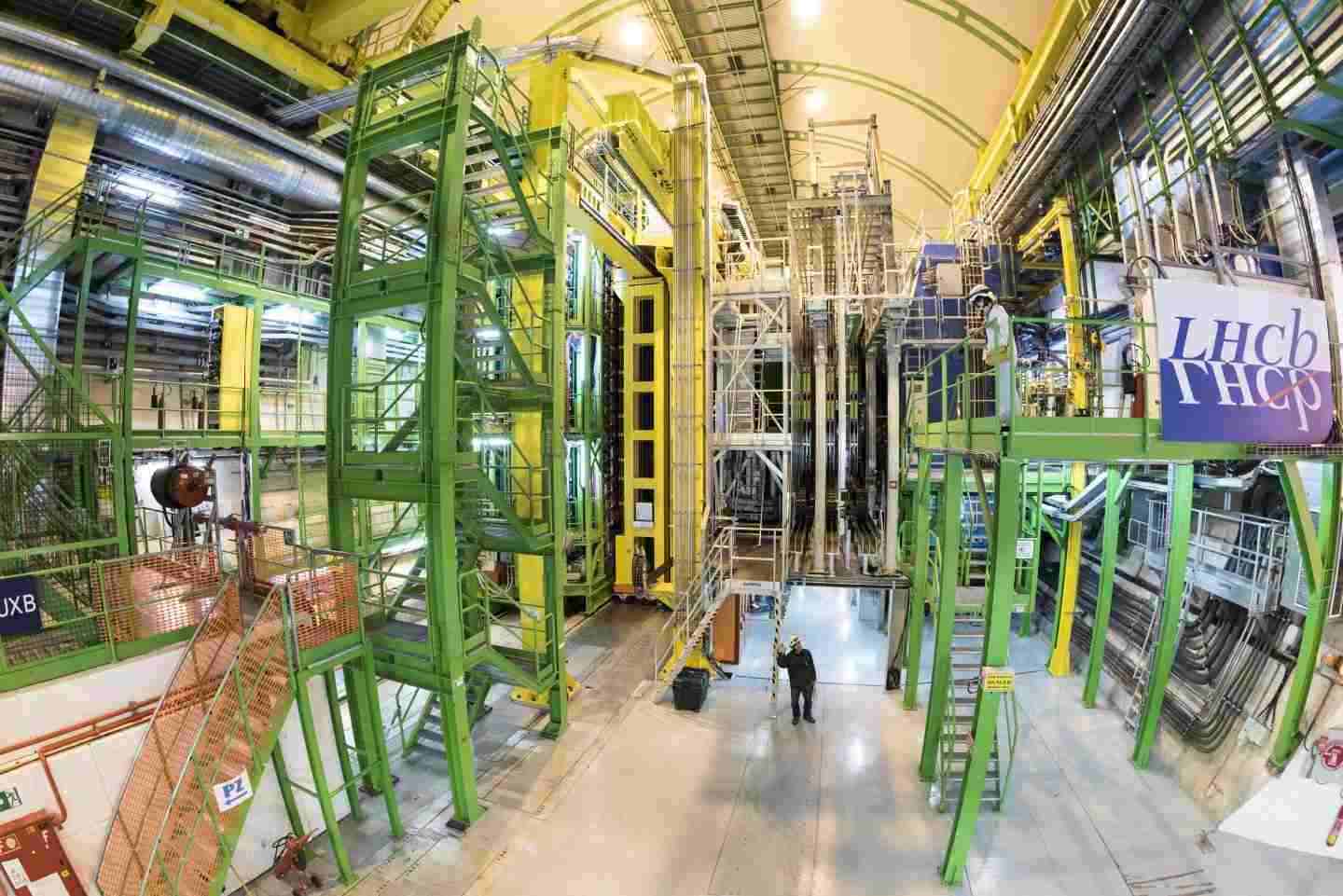 A view of the LHCb experimental cavern. (Image: Maximilien Brice/CERN)

One of the biggest challenges in physics is to understand why everything we see in our universe seems to be formed only of matter, whereas the Big Bang should have created equal amounts of matter and antimatter.

CERN’s LHCb experiment is one of the best hopes for physicists looking to solve this longstanding mystery.

At the VIII International Workshop on Charm Physics, which took place in Bologna earlier this month, the LHCb Collaboration presented the most precise measurement to date of a phenomenon called Charge-Parity (CP) violation among particles that contain a charm quark.

CP symmetry states that laws of physics are the same if a particle is interchanged with its anti-particle (the “C” part) and if its spatial coordinates are inverted (P). The violation of this symmetry in the first few moments of the universe is one of the fundamental ingredients to explain the apparent cosmic imbalance in favour of matter.

Until now, the amount of CP violation detected among elementary particles can only explain a tiny fraction of the observed matter-antimatter asymmetry. Physicists are therefore extending their search in the quest to identify the source of the missing anti-matter.

The LHCb collaboration made a precise comparison between the decay lifetime of a particle called a D0 meson (formed by a charm quark and an up antiquark) and its anti-matter counterpart D0 (formed by a charm antiquark and an up quark), when decaying either to a pair of pions or a pair of kaons. Any difference in these lifetimes would provide strong evidence that an additional source of CP violation is at work. Although CP violation has been observed in processes involving numerous particles that contain b and s quarks, the effect is still unobserved in the charm-quark sector and its magnitude is predicted to be very small in the Standard Model.

Thanks to the excellent performance of CERN’s Large Hadron Collider, for the first time the LHCb collaboration is accumulating a dataset large enough to access the required level of precision on CP-violating effects in charm-meson decays. The latest results indicate that the lifetimes of the D0 and D0  particles, measured using their decays to pions or kaons, are still consistent, thereby demonstrating that any CP violation effect that is present must indeed be at a tiny level.

However, with many more analyses and data to come, LHCb is looking forward to delving even deeper into the possibility of CP violation in the charm sector and thus closing in on the universe’s missing antimatter. “The unique capabilities of our experiment, and the huge production rate of charm mesons at the LHC, allow us to perform measurements that are far beyond the sensitivity of any previous facility,” says Guy Wilkinson, spokesperson for the LHCb collaboration. “However, nature demands that we dig even deeper in order to uncover an effect. With the data still to come, we are confident of responding to this challenge,” he adds.