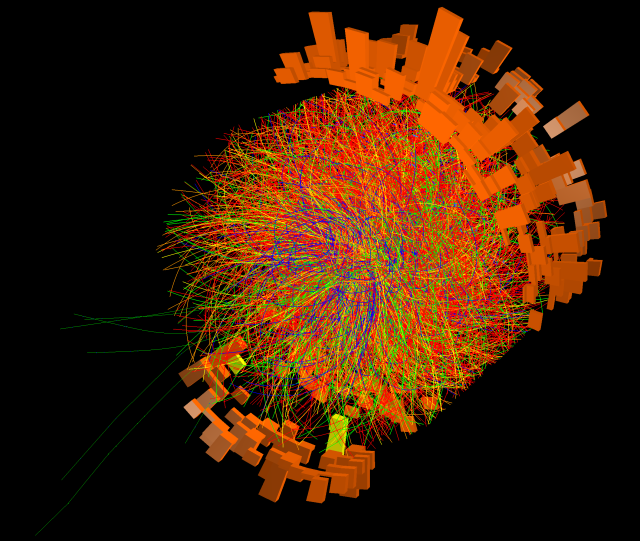 Geneva and Chicago, 9 February 2017. This week the LHC experiment collaborations presented their latest results at the Quark Matter 2017 conference on how matter behaved in the very early moments of the universe.

Each year a special heavy ion run of CERN’s Large Hadron Collider provides collisions with lead nuclei, recreating conditions similar to those just after the big bang. Such collisions generate temperatures more than 100,000 times hotter than the centre of the Sun and allow researchers to study a state of matter called the “quark-gluon plasma". Under the extreme conditions created, protons and neutrons that make up the lead ions "melt", freeing quarks from their bonds with the gluons. Studying the quark-gluon plasma, and how it expands and cools, is important as it can help explain how it progressively gave rise to the particles that make up our universe today. It is also essential to understand the theory of the strong interactions known as Quantum Chromodynamics (QCD), which is the fundamental force describing the interactions between quarks and gluons.

"Quark matter demonstrates the wealth of physics results on a topic which is inherently very complex, heavy ionphysics,” said Eckhard Elsen, CERN Director for Research and Computing. "With the LHC performing so well and in so many different beam constellations, we have the experimental tools at hand to shed light on the state of matter that dominated in the early beginning of our universe.”

Individual heavy ion collisions create only a small droplet of quark-gluon plasma; the multitude of tracks left by the particle collisions allows scientists to look at how particles behave in such a medium. As an example, among the new results presented, the ALICE collaboration has shown that heavy quarks directly “feel” the shape and size of the quark-gluon-plasma droplet created within the region of the collision. This means that even the heaviest quarks move with the plasma, which is primarily formed of light quarks and gluons. ALICE also presented new results on the distribution of particle species – e.g. pions and kaons, among a zoo of other particles – in collisions of lead nuclei that help to measure the pressure and density in the quark-gluon plasma.

Particles are also used as direct probes to measure characteristics of the plasma. This is done by different means such as precision measurements of the energy loss of particles travelling through the plasma – a phenomenon known as jet quenching. ALICE, ATLAS and CMS all presented new results in this area at a new lead collision energy per nucleon pair of 5 TeV. These have been compared to previous measurements at the collision energy of 2.76 TeV. Significant progress has been made on jet quenching with many new results reported at the Quark Matter 2017 conference.

All of the LHC experiments now collect large samples of collisions of lead nuclei and lead nuclei with protons. The ATLAS and CMS collaborations presented key features of collective particle behaviour in high-multiplicity collisions, which are key to better understanding the microscopic mechanisms at play in the quark-gluon plasma, as well as new methods for measuring the collective effects in small systems. The LHCb collaboration also presented its first public result from fixed-target collisions with argon – a completely new programme at the LHC also allowing for very high energy density where, again, particles containing heavy-quarks exquisitely reconstructed in their detector, play an important role.