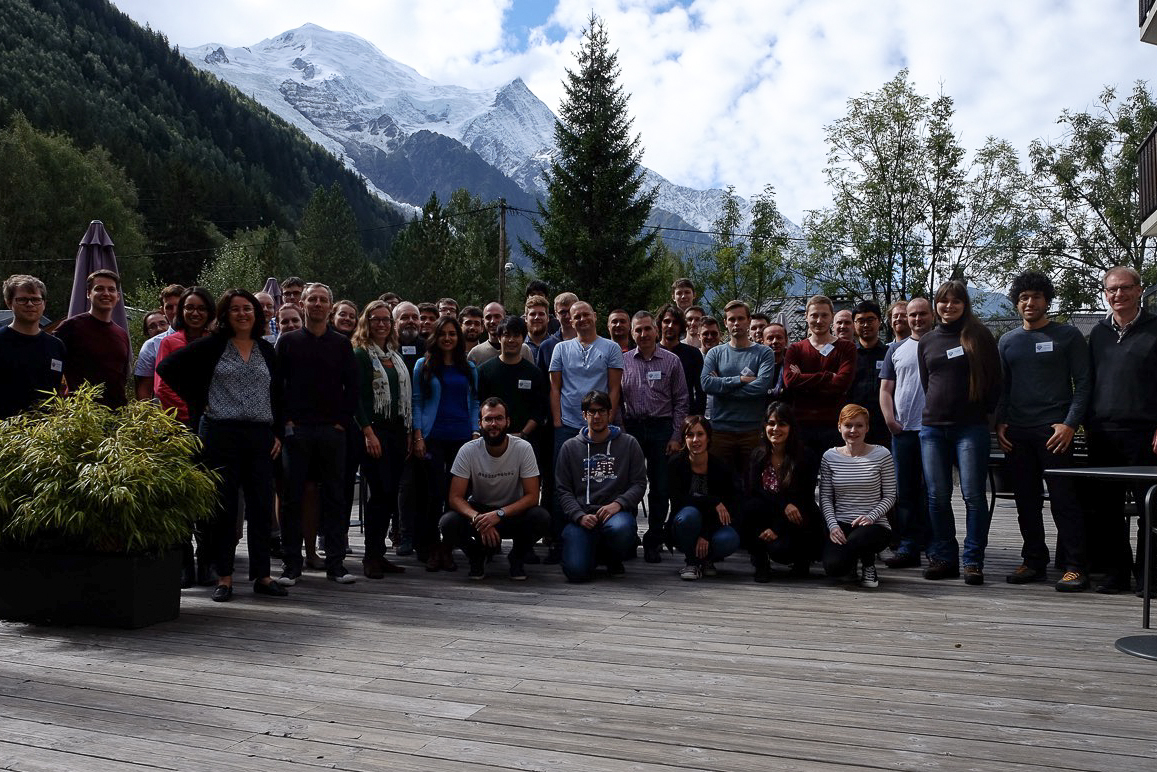 The participants of the SCINT 2017 Summer School on scintillation and its applications in Chamonix. (Photo: SCINT organising committee)

Twenty-five years after its first session, the SCINT conference returned to its birthplace. SCINT was launched in 1992 by Paul Lecoq, who at the time was the spokesperson for the new Crystal Clear collaboration (RD18 experiment), and every two years brings together more than 200 experts – theorists, engineers, representatives of industry and users – in scintillation and its applications. This year, for its 14th session, SCINT celebrated its quarter-century in Chamonix.

Scintillators are used in many different fields: nuclear and high-energy physics, astrophysics, medical imaging, non-destructive testing, safety devices, etc. In the form of crystals or fibres, they convert high-energy radiation into light pulses and can thus be used to detect the presence of ionising radiation and to obtain data about its energy level, trajectory and characteristics.

In 2017, 273 participants attended the event, including many manufacturers of scintillator crystals and detection specialists, who presented their latest innovations on 18 stands and held discussions with scientists during a dedicated afternoon session.

Since the very start, SCINT has witnessed and driven significant advances in the field of scintillation, in both academia and industry. In 1992, the scintillation properties of lead tungstate (PbWO4) were presented for the first time. This material was later adopted by the CMS and ALICE experiments at the LHC. That year also saw the announcement of the discovery of cerium-doped lutetium oxyorthosilicate (LSO), a crystal now widely used in positron emission tomography (PET) scanners.

“The discussions at SCINT between specialists in different fields are one of the strengths of the conference,” says Etiennette Auffray, spokesperson of the Crystal Clear collaboration and Chair of the SCINT 2017 conference. “They have resulted in significant advances in our understanding of scintillation mechanisms and the development of new materials and innovative devices, and have helped to encourage technology transfer between high-energy physics and applications as diverse as medical imagery, industrial process control, and nuclear safety and non-proliferation.”

The members of the Crystal Clear collaboration are currently participating in several European projects, including Intelum (a Marie Skłodowska-Curie RISE project), ASCIMAT (a Twinning project) and FAST (COST Action). “Thanks to COST TD1401: FAST (Fast Advanced Scintillator Timing) and the ASCIMAT project, we have been able to support the participation of 18 students in the first SCINT Summer School, which took place between 14 and 17 September, bringing the total number of participants to 56 (including several from industry),” adds Etiennette Auffray. “The students were able to acquire valuable knowledge about scintillation mechanisms and detectors before the start of the conference, which was a resounding success!”

To find out more about Crystal Clear, read the article published in the CERN Courier to celebrate the 25th anniversary of the collaboration.