The Standard Model stands its ground

The LHCb collaboration has presented a new measurement of a rare particle decay, providing another strong confirmation of the Standard Model 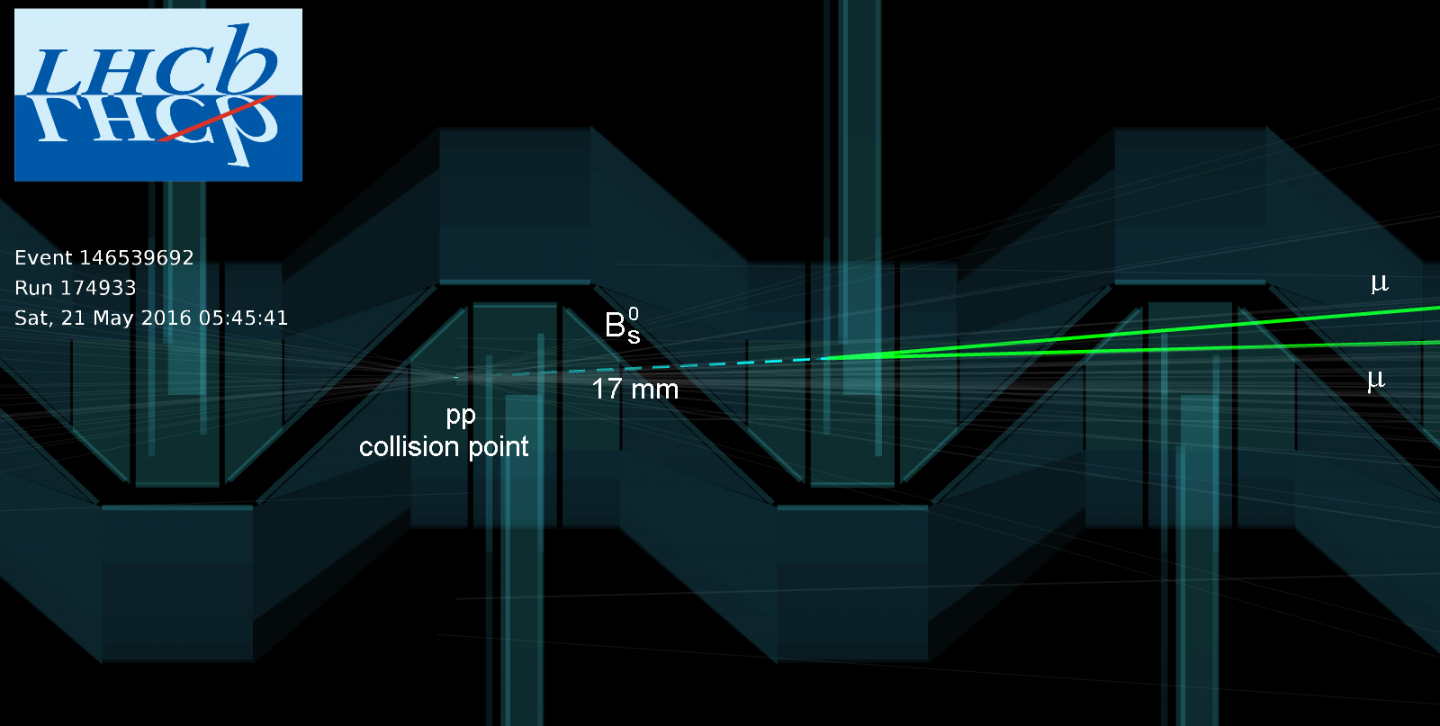 Event display of a typical Bs0 decay into two muons. The two muon tracks from the Bs0 decay are shown in green. (Image: LHCb collaboration)

Today, in a seminar at CERN, the LHCb collaboration presented an exceptional result for a very rare decay of a particle called BS0. This observation marks yet another victory for the Standard Model (SM) of particle physics – the model that explains, to the best of our knowledge, the behaviour of all fundamental particles in the universe, better than all its principal theoretical alternatives.

The LHCb collaboration has reported the observation of the decay of the BS0 meson – a heavy particle made of a bottom anti-quark and a strange quark – into a pair of muons. This decay is extremely rare, the rarest ever seen: according to theoretical predictions, it should occur about 3 times in every billion total decays of that particle.

The decay of the BS0 meson has long been regarded as a very promising place to look for cracks in the armour of the Standard Model, which, despite being our best available description of the subatomic world, leaves some questions unanswered. Therefore, over time, physicists have come up with many alternatives or complementary theories. A large class of theories that extend the Standard Model into new physics, such as Supersymmetry, predicts significantly higher values for the probability of the BS0 decay. Therefore, an observation of any significant deviation from the SM-predicted value would suggest the presence of new, as yet unknown, physics.

The experimental value found by the LHCb collaboration for this probability shows excellent agreement with the value predicted by the theory, and the result is confirmed to a very high level of reliability, at the level of 7.8 standard deviations: meaning that the scientists are extremely sure that it hasn’t occurred just by chance. The LHCb collaboration obtained the first evidence of this phenomenon in November 2012, with a significance of 3.5 standard deviations. Three years later, together with the CMS collaboration, LHCb obtained the first confirmed observation in May 2015, with a significance of 6.2 standard deviations (for more information, read the CERN Press release and the paper published in Nature).

This new finding limits the room for manoeuvre of other physics models beyond the SM: all candidate models will have to demonstrate their compatibility with this important result.