Taking the temperature of protoDUNE 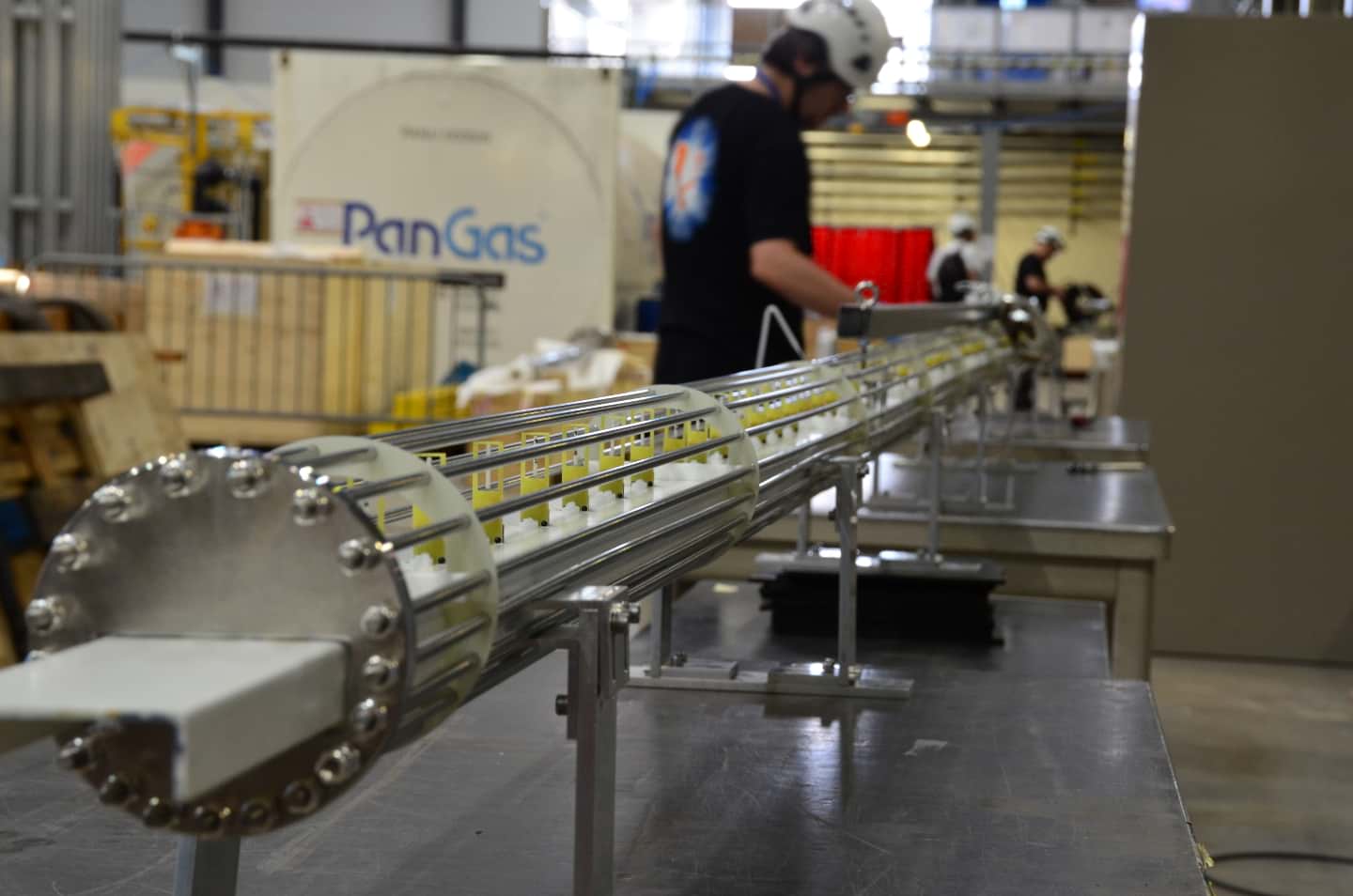 When crane operators at CERN lowered a custom 7.5-metre thermometer into one of the prototypes for the planned Deep Underground Neutrino Experiment (DUNE) earlier this month, it looked like a silver straw sliding into a giant juice carton. But designing and installing this intricate instrument was far from child’s play.

The thermometer was constructed by the Instituto de Física Corpuscular in Valencia, Spain, and then shipped to CERN in three delicate pieces. The thermometer is 12.5 cm in diameter and was lowered into place through a hole that has less than 2 cm of wiggle room. It is currently hanging from the ceiling of a colossal cryostat for protoDUNE-SP, one of the two prototype liquid-argon detectors for the DUNE experiment. DUNE will study subatomic particles called neutrinos by measuring the light and clouds of electrons that they leave behind as they pass through huge vats of liquid argon.

The purpose of the thermometer is to measure the temperature of the detector’s liquid-argon tank at 48 different depths, enabling scientists to make sure that the filtration and cooling system of the detectoris working as expected.

“The argon will constantly cycle through an external filtration and cooling system to keep it pure and chilled to around -196 degrees Celsius,” said Anselmo Cervera, a scientist from the Instituto de Física Corpuscular who helped design and build the thermometer. “It will take about 5.5 days for all the argon to make one complete pass through this system, so its temperature will always vary based on the depth. We know from simulations what the temperatures should be at each depth, and if the measurement matches the prediction, it’s a clear indication that the filtration and cooling system is working properly.”

According to Cervera, this is of the utmost importance because impurities (such as oxygen or water) will “eat” the electrons emitted by the passing neutrinos and destroy their signal. “We’re aiming to have less than 10 water molecules for every trillion argon atoms,” Cervera said.

The thermometer consists of a fibreglass skeleton with 48 platinum sensors spaced along its spine. The entire instrument is encased in a metallic structure known as a Faraday cage to avoid electrical discharges between the thermometer and other parts of the detector.

This thermometer can determine the relative temperatures of the liquid argon inside the cryostat at 48 depths with a precision of 0.003 degrees Celsius – approximately 100 times more precise than a standard household thermometer. “After extensively calibrating the platinum sensors, we can accurately calculate any changes in their temperature by measuring changes in their electrical resistance,” Cervera said.

The thermometer is one of two inside the protoDUNE-SP cryostat. The second thermometer, which is also 7.5 metres long and contains 22 sensors, was constructed by the University of Hawaii and Fermilab and uses a different technique to calibrate its sensors and obtain high-precision temperature measurements at different depths.

“Because we won’t be able to access the thermometer while it is inside the cryostat to verify its measurements, we’ve developed a way to continuously calibrate its temperature sensors by moving the thermometer up and down by 1.5 metres inside the liquid argon,” said Jelena Maricic, a professor at the University of Hawaii who helped design and build this thermometer. “We can then cross-reference the sensors’ measurements at various heights and verify if the sensors are correctly calibrated.”

Testing these two devices inside the protoDUNE-SP detector is an important step in perfecting the technology for DUNE, which will be 1.6 kilometres underground and consist of four detectors, each of which will be 20 times larger than the 8-metre-cubed prototypes.