Where were you? Your Higgs stories revealed

On the 5th anniversary of the Higgs discovery announcement, we asked you where you were when you heard this result 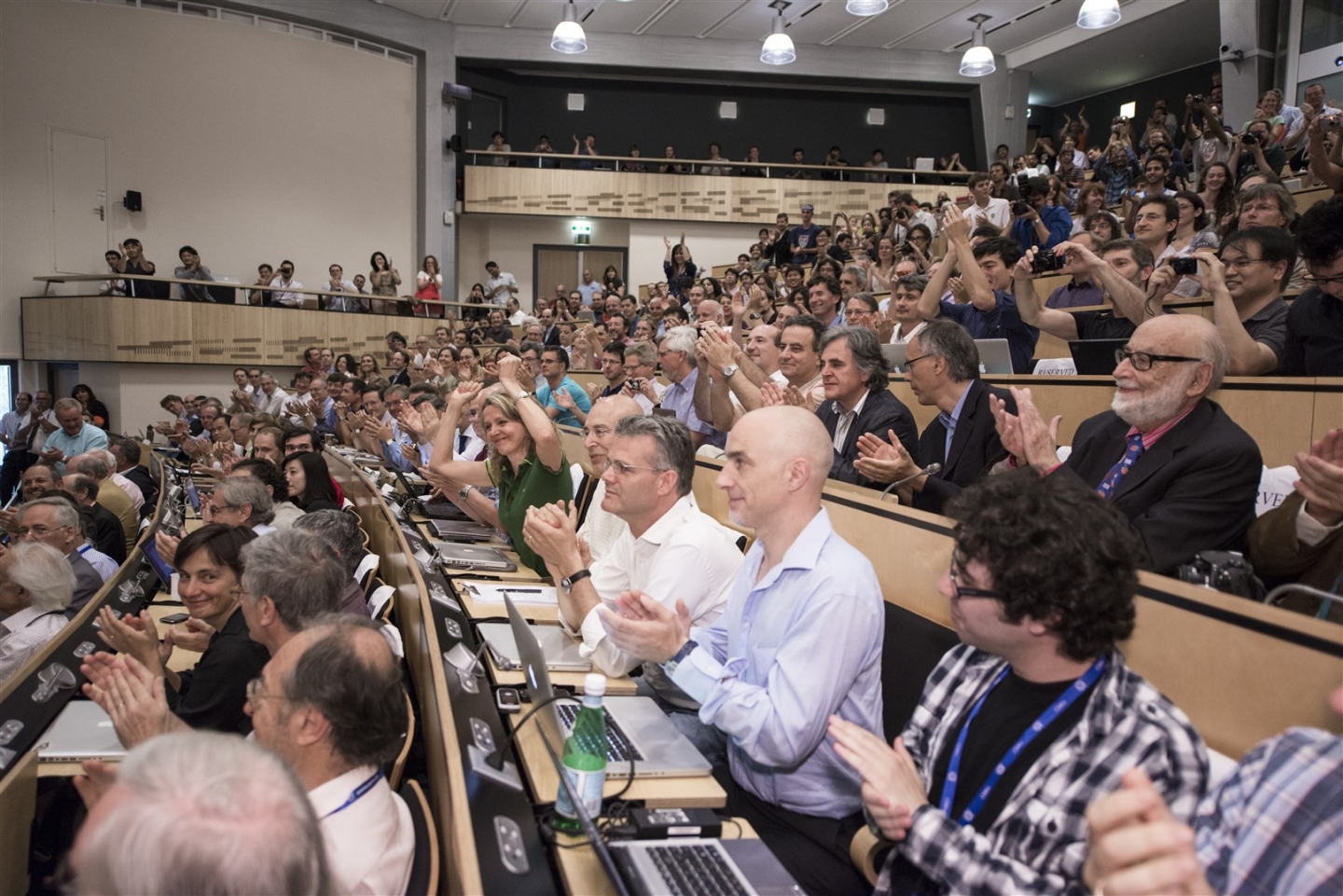 Standing ovation in the CERN auditorium at the end of the seminar announcing the discovery of the Higgs boson. (Image: Maximilien Brice, Laurent Egli/CERN)

The first time you hear world-changing news is always memorable. The discovery of the Higgs boson was one of the most important discoveries in science to date, and it happened in our lifetime. If you were part of the particle physics community or were interested in the research, you can undoubtedly answer straight away: Where were you when you heard?

On 4 July 2012, Fabiola Gianotti, the ATLAS spokesperson, and Joe Incandela, the CMS spokesperson, announced that their experiments had found a particle consistent with the long sought-after Higgs boson.

The news generated a wave of emotion among the science community and made headlines around the world.

We asked you to share with us your memories of the day. Thanks to everyone who submitted their story. We can only publish a few, but you can share more on social media using the hashtag #HiggsStories or add your own to the comments on the CERN Facebook page.

“I loitered around the Main Auditorium after they had filled the seating area. Surprisingly, three of us were called in at the very last second and I was placed in the first row, in front of Lyn Evans and Chris Llewellyn Smith! [Editor: Lyn Evans was the Head of the LHC project during the construction and commissioning phase and Chris Llewellyn Smith is a former CERN Director General.] In the picture, I am the gentleman who Fabiola is shooing out of the way to congratulate both of them. Perhaps the most amazing part of the entire experience was just how much humanity and camaraderie was displayed. When the CERN Director-General asked if anyone had anything to say, I could hear Lyn Evans and Chris Llewellyn Smith behind me: ‘You should say something’, ‘No, YOU should say something’. It was a truly humbling moment.”

David W. Miller, ATLAS physicist from the University of Chicago

“The day the Higgs was announced, I was at home 40 weeks pregnant looking forward to making my own discovery of the year: motherhood! But I really remember well plugging my computer into a projector and watching the webcast on a big screen, so it would feel more like I was in the Main Auditorium with everyone. I felt very proud of all of us for this great achievement.”

26 years to complete my task

“I began my research career on 4 July 1986 at Harvard University, in the US, with Carlo Rubbia. Professor Rubbia liked to have group meetings on national holidays in the US. My first project was to look for the decay of a Higgs into gamma gamma in the UA1 experiment’s data. Exactly 26 years later we announced the discovery of a Higgs to gamma gamma and my group was part of the CMS team doing that analysis. It only took 26 years to the day to complete the project that Professor Rubbia assigned me on my first day.”

Colin Jessop, CMS physicist from the University of Notre Dame

“I was in the CERN auditorium, after getting in line around 2am. Even then I was in one of the last rows. I think that day is the only time I've ever had celebratory champagne for breakfast. Completely worth it though to stay up all night, now I have an amazing story to share!”

Stephanie Hamilton, was a CERN summer student in 2012 and is now a PhD student in astronomy

We are the champions, my friends

"I thought it would be tough to miss the most tantalising seminar at CERN during my time in particle physics. But I was lucky to be at DESY, where they broadcasted the event in the Main Auditorium. The auditorium was packed, everyone was excited and impatiently waiting to see the results of the two experiments - the atmosphere was similar to a public screening of an international football tournament final. And when Rolf Heuer finally concluded that he believed we had a discovery, it felt like seeing the deciding goal: big applause and great joy from everyone!"

“I was one of many who attended the 2 am (local time) simulcast of the CERN presentations announcing the Higgs Boson, at Fermilab, outside Chicago, in the US. Two things made it especially memorable. First, the announcement of the nighttime event jokingly mentioned that pyjamas were optional (I thought my faux fur tiger robe might be appropriate for the festive occasion). Secondly, my 16-year-old son, Thomas, showed great interest and decided to join me. It’s been a pleasure since to watch his interest in physics grow, as he continues to work on neutrino and dark matter physics after completing his undergraduate studies.”

The discovery turns into reality

“After a sleepless month (I worked in the CMS diphoton channel and on the final combination of all Higgs searches), on 4 July 2012 I left CERN around 2am after helping prepare the CMS presentation for the seminar. Then, during the morning, I was in the Main Auditorium, live tweeting for CMS. Many people ask me when the Higgs boson was discovered, usually thinking that I'll say something about the CMS data. In fact, for me, the discovery happened upon seeing the ATLAS results and realising we hadn't made a mistake ourselves.”

How I became Higgs’ bodyguard

"On day two of my new job at CERN, I was asked if I would be willing to look after Professor Higgs on 4 July 2012, around a seminar to announce the latest results from the ATLAS and CMS experiments. Well, what would you say? Just before the seminar began, Professor Higgs was escorted to the packed auditorium. The media went mad, surging forwards. There were TV camera operators jostling for the best position, alongside journalists with audio recorders and microphones. It was astounding – this unassuming, very private, octogenarian was being treated like the latest teen pop sensation!”

Chasing me that far

“I was in Shanghai, on vacation. That morning the Shanghai Daily newspaper was displayed at the entrance to my hotel’s restaurant. CERN and the Higgs boson chased me that far!”

Many physicists found themselves in the air at the time, on a flight to Australia for the ICHEP conference. All the latests results from the LHC experiments had to be presented at this major particle physics conference. But, two weeks before the conference, it was decided that the Higgs discovery would be announced at a seminar at CERN. Some physicists didn’t hear about the result until they landed, a somewhat bittersweet moment, as some had been working towards the result for decades.

“I was on a plane to Melbourne to take part in the ICHEP conference.”

“I was attending ICHEP in Australia. I found myself sitting next to a reporter from the Australian Associated Press. I chatted with her a bit; she was a general news reporter with no science background and a little worried about how to cover this story. The next day, I found this article online. It wasn't how I had planned to make the news. But I will say that the words "kindly" and "unhelpful", which describe me in the article, also appear frequently on my teaching evaluations.”

Ken Bloom, CMS physicist from the University of Nebraska-Lincoln

The Higgs in Hindi

“I was in a tea shop in the city of Kanpur, India. In front of me a person was reading a newspaper and my eyes were drawn to an image of the ATLAS detector. Then I gradually realised the article was about the discovery of the elusive Higgs boson. I returned home to find on every news channel on TV were stories about the Higgs discovery. The next day, I woke up early to buy newspapers - every paper, whether it was in English, Hindi or Urdu, had a headline about the Higgs discovery.”

Mohammad Ibrahim Mirza – a physics Masters student in 2012, he is now applying for a PhD in the CMS experiment.

So lucky to be here

“It was the summer before the beginning of my university studies, and I was working as a summer helper at a factory, building industrial air conditioners. Throughout the day I followed the news coverage of the announcement on my phone, whenever I had a moment to spare, hoping that one day I could at least visit CERN, where they were discovering the secrets of the Universe. Today I still can't believe how lucky I am to get to do research for my PhD here.”

In the middle of nowhere

“I was travelling in the Canadian Rockies in a camper van with no access to email or news, disconnected from anything that was going on in the world and absorbed by our adventure. On a wet 4 July 2012 we made a stop to refuel in a small petrol station in the middle of nowhere. There, lying on the plastic tables in the cafe, were local newspapers with CERN and the Higgs Boson announcement making headlines.”

“It happened during the period when I was writing my first short and educational book, AstroParticelle on cosmic rays. Due to the good news, I had to rewrite a whole paragraph.”

A genius in my family

“I was working as a TV producer, in Lisbon. When I arrived at the studio the next day everyone was joking, congratulating me because ‘I had genius in the family’.”

Read more about the discovery of the Higgs boson.