CERN and the French space agency, CNES, signed an agreement to collaborate on aerospace projects, from big data solutions to satellites 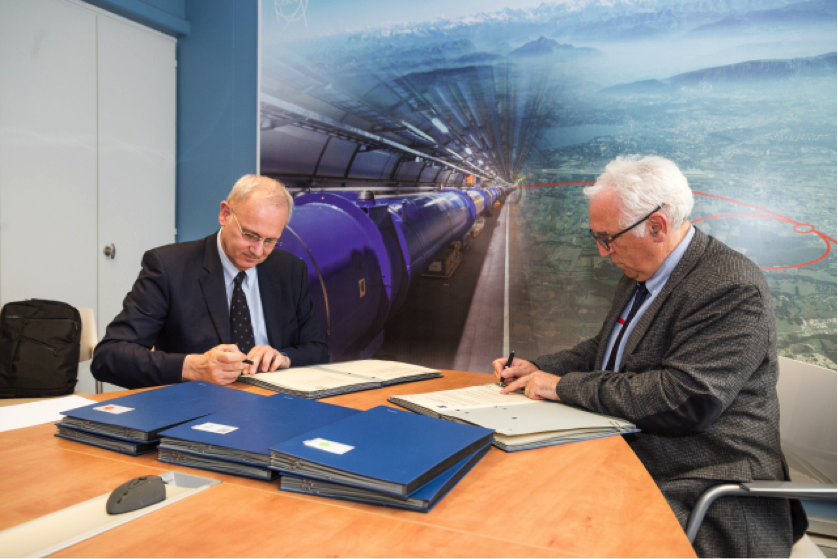 This formalises a long-term partnership in shared areas of interest, such as radiation measurements and their effects on electronic components, which are critical for both particle accelerators and space missions.

The agreement, which was signed by CNES President Jean-Yves Le Gall and Frédérick Bordry, Director for Accelerators and Technology at CERN, describes the wide range of planned collaborations. These will cover a huge range of technologies, from radiation studies, particle detector innovations and big data solutions, to miniature satellites, called cubesats.

“We are proud to have signed this framework agreement. It reflects our two agencies' complementary areas of interest. The RADECS 2017 international conference, which we are organising together in October in Geneva, will give us the opportunity to present the results of our collaboration,” they commented in a joint statement.

Three projects formalised in the agreement have already begun:

These projects, technically led by CERN Engineering Department, have benefited from support from the CERN Knowledge Transfer Fund. More collaborative projects in the pipeline could involve the use of CERN's particle detectors and optoelectronics technologies in space and the exchange of data analysis tools. Future CNES-CERN cooperation will mainly take the form of research and development collaborations, jointly coordinated by both institutes. CNES will also receive privileged access to CERN facilities, while CERN will in turn benefit from CNES validation of its facilities for space qualification tests.

Enrico Chesta, CERN's aerospace applications coordinator, and Julien Mekki, CNES radiation expert, highlighted that valuable knowledge transfers between CERN and CNES have already taken place through the exchange of personnel, and stressed the symbolic importance of the event: “This is both an important achievement and a starting point paving the way to many useful future joint initiatives.”

The synergies and competencies in each of the organisations' respective domains of excellence will be particularly important for sharing resources.

Recently, CERN has been developing a network of institutional partnership with space agencies, industry, universities and international organisations active in the aerospace field. CERN is also organising, with CNES involvement, the RADECS conference (Radiation Effects on Components and Systems), which will be held in October 2017 in Geneva. This annual event brings together the world's scientific community working on the effects of radiation on electronic components and systems, an area of study that has a major bearing on both the success of space missions and the reliability of accelerators.