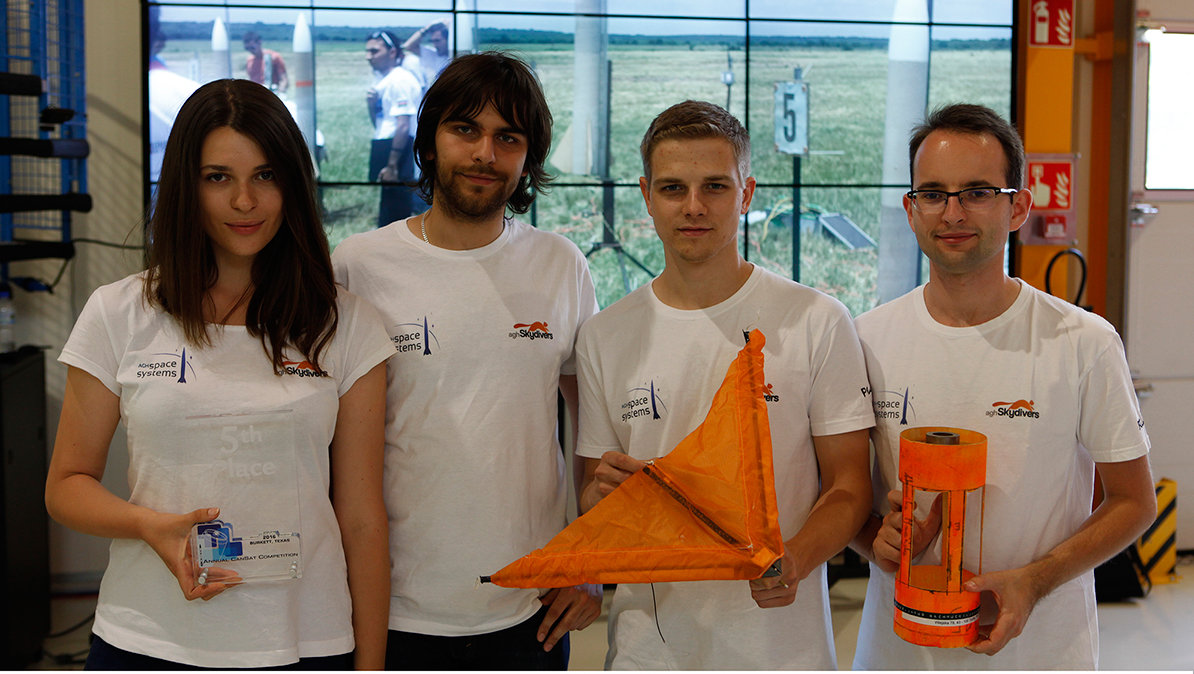 Four students, from AGH University of Science and Technology in Krakow, Poland entered the international CanSat Competition organised by NASA, the AAS and the American Institute of Aeronautics and Astronautics (AIAA) (Image: AGH Space Systems/CERN)

Last year the four students, from AGH University of Science and Technology in Krakow, Poland entered the international CanSat Competition organised by NASA, the American Astronomy Society (AAS) and the American Institute of Aeronautics and Astronautics (AIAA) in Texas.

The competition asked teams to design, prototype, build, test and launch an atmospheric probe and simulate a mission landing on Mars. For the final of the competition the team travelled to Texas where, after 72 hours of continuous work, judges awarded them with fifth place out of 57 teams from around the world.

“We felt like doing something more than hanging out in Geneva after work, and decided to start our ambitious project,” explains Jakub Rachucki, one of the team. “After this great adventure, proud and tired, we were ready to come back to CERN. To share our story and promote both IdeaSquare and AGH, so we organised our conference, where not only the atmospheric probe was presented, but also our rockets, Mars rover and atmospheric balloon equipment.”

Whilst working on the project the students entered into an 8-month-long cooperation between AGH Space Systems (their design society) and CERN’s IdeaSquare, who allowed the group use of their workshop and tools. The project fits with IdeaSquare’s philosophy of bringing people together to come up with new ideas that are useful for society.

“Think it sounds pretty easy, huh? But not only was it supposed to hit the ground, then glide in a circular pattern within a 1000 metre diameter. In addition, it had to sample the atmosphere and communicate with the ground station in real time. It was also taking pictures and transmitting them via radio. And by the way, all of it weighed 250g and was enclosed in a can-shaped 25cm by 12cm container,” Weronika Mrozinska continues.

The students already had some experience with this competition after they took part last year and won.

They were also the only Polish team in the competition and came top of all the European teams.

The space adventure comes to a conference at ...