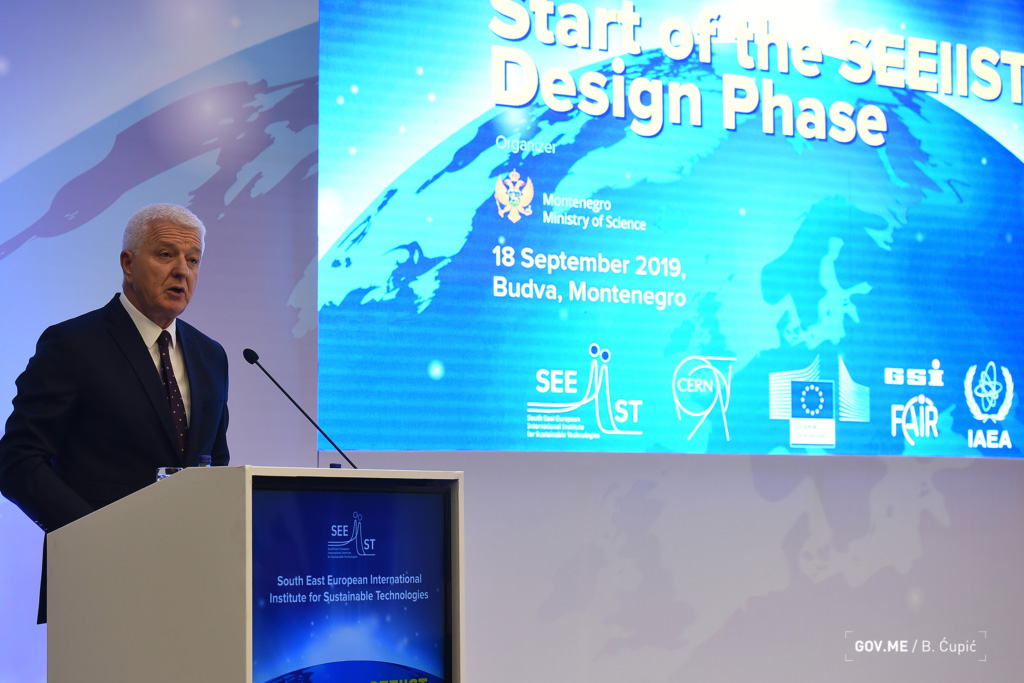 A state-of-the-art facility for hadron therapy in south-east Europe has moved from its conceptual to its design phase, following financial support from the European Commission. At a kick-off meeting held on 18 September in Budva, Montenegro, more than 120 people met to discuss the future South East European International Institute for Sustainable Technologies (SEEIIST) – a facility for tumour therapy and biomedical research that follows the founding principles of CERN.

The idea for SEEIIST came from former CERN Director-General Herwig Schopper and benefitted from a political push from Montenegro minister of science Sanja Damjanović, who is also a physicist who works at CERN and GSI-FAIR in Darmstadt, Germany. SEEIIST aims to create a platform for internationally competitive research in the spirit of the CERN “science for peace” model, stimulating the education of young scientists, building scientific capacity and fostering greater cooperation and mobility in the region.

Europe has played a major role in the development of hadron therapy, with numerous centres currently offering proton therapy and four facilities offering proton and more advanced carbon-ion treatment. But currently no such facility exists in south-east Europe despite a growing number of tumours being diagnosed there. SEEIIST will follow the idea of the “PIMMS” accelerator design, which started at CERN two decades ago, profiting from the experience at the dual proton–ion centres CNAO in Italy and MedAustron in Austria, as well as centres at GSI and in Heidelberg. It will be a unique facility that splits its beam time 50:50 between treating patients and performing research with a wide range of different ions for radiobiology, imaging and treatment planning. The latter will include studies into the feasibility of heavier ions such as oxygen, making SEEIIST distinct in this rapidly growing field.

The next steps are to prepare a definite technical design for the facility, to propose a structure and business plan and to define the conditions for the site selection. To carry out these tasks, several working groups are being established in close collaboration with CERN and GSI-FAIR. “This great event was a culmination of the continuous efforts invested since 2017 into the project,” says Damjanović. “If all goes well, construction is expected to start in 2023, with first patient treatment in 2028.”

This article was originally published on cerncourier.com

Thirty years of the TERA Foundation

ENLIGHT meeting on particle therapy in the Ne...

Come and play with HEAL in Microcosm!