How to build radon smart sensors based on CERN technology 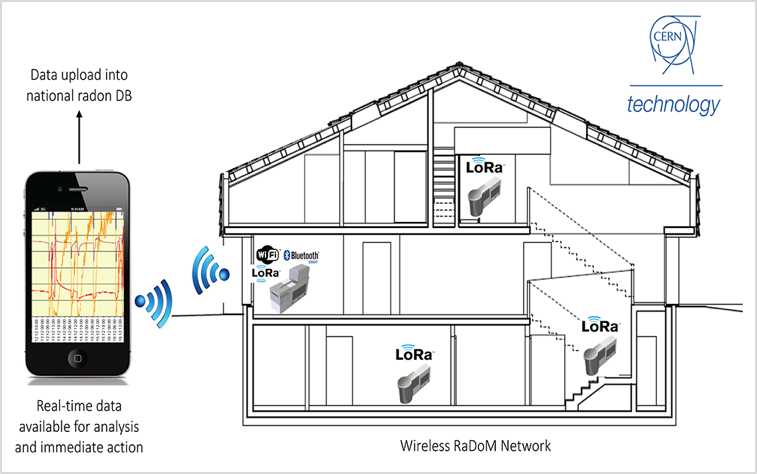 The Radon Dose Monitor (RaDoM) project, whose aim is to create a device to tackle the risks of high radon levels, has made it to the final round of the MassChallenge 2017 Start-up Accelerator Programme, which has the goal of helping start-up businesses succeed by providing resources such as mentoring, networking events, and office space.

Radon, a natural radioactive gas, is a colourless and odourless gas produced as part of natural decay processes. However, the gas is also hazardous and poses a risk when it accumulates in buildings, particularly in enclosed spaces such as lofts or basements. Pre-emptively monitoring the gas level in homes, workplaces, schools and other public buildings is therefore crucial. However, many currently available radon measurement systems are inefficient, expensive or can only be operated by experts. In addition, without sharing or compiling the data in an archive, health and government authorities encounter a lot of difficulties in properly monitoring geographical trends.

Thanks to the funding from the AIDA-2020 Proof-of-Concept and the CERN Medical Applications funds, the RaDoM team will work in conjunction with Politecnico di Milano to develop a network of smart sensors based on CERN technology for monitoring radon. The participation to the MassChallenge 2017 has the goal of setting up a CERN spin-off company named SmartSensors to develop this device and software.

Whilst authorities (such as public health offices) will be able to monitor the radon levels via the central database, direct users will have access to radon data in real-time using mobile applications, and later a web interface. This will allow basic mitigation actions to be triggered when radon concentration exceeds the reference values.

Francesco La Torre, future CEO of the SmartSensors spin-off company and a Radiation Protection Physicist at CERN, details his experience in the first round of the challenge, “I gave a pitch at Campus Biotech in Geneva in front of an expert panel of six judges and the feedback was overwhelmingly positive.”

The project was selected from 450 applicants for the first stage of the MassChallenge Switzerland 2017 start-up accelerator. It was then selected as one of the 75 Swiss finalists, and will officially join the programme as of 19th June 2017.