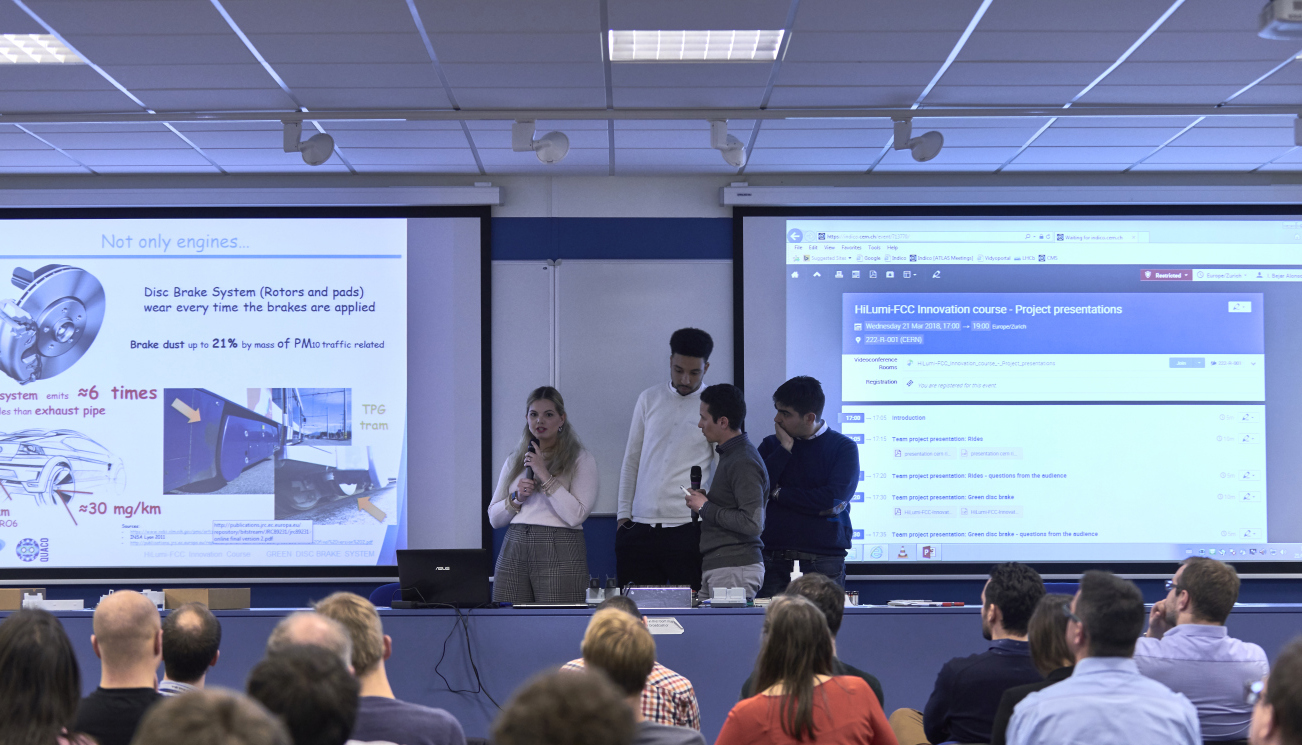 One of the three teams presenting their project (Image: CERN)

Early this year, the High-Luminosity Large Hadron Collider (HL-LHC) and the Future Circular Collider (FCC) teams organized for the first time an Innovation Course for young researchers in their last year of association with CERN. Developed in collaboration with IdeaSquare and CERN Knowledge Transfer (KT), this course was aimed at providing the participants with an insight into their future career perspectives, beyond their scientific experiences at CERN.

By means of hands-on learning tools, they explored opportunities of applying KT technologies and Design Thinking practices in order to think as innovators and develop their own entrepreneurial project. Nineteen creative ideas were pitched during the course, and finally the participants teamed up for three selected projects. After several weeks of intense teamwork, the course concluded on 21 March with a final presentation event.

The first project – “CERN rides” – is a ride-sharing app for the CERN community. Since many people commute to CERN in their own vehicles, the team estimated that using this app and sharing rides would save up to 1.5 tonnes of CO2  per day and nine working days per year of sitting in one’s car in traffic. Moreover, it would help address the shortage of parking spaces on site as well as difficulties related to public transport. More than 80% of CERN people could be potential users. Marta Alcaide, the team leader, aims to fully develop the app over the next 18 months and help solve CERN’s commuting issues.

The “Green Disc Brake System”, is another creative project proposal, aimed at developing a sustainable device for disc brakes in cars to trap the harmful particles emitted during braking. Traditional braking systems emit six times more harmful particles than exhaust pipes, which increases air pollution leading to high rates of lung disease. Working as a trap and filter, this system would not only improve air quality in cities, it would also allow heavy and rare metals to be collected and recycled. The team, which is led by Alessio D’Andrea, has already built a prototype of the device and plans to test it on CERN vehicles soon.

The third project is called “Kinesis” and is a wearable resistance trainer with embedded energy harvesting. It is a motor unit with a microcontroller that, when worn, typically on one’s leg, can generate energy from the performance of simple movements. It could be used to solve issues associated with a sedentary lifestyle, medical limitation of motion or muscle atrophy in space, or simply to charge wearable technology. Manuele Narduzzi and his team now aim to develop prototypes of a device that is simple, ecological and safe to use.

Generating a lot of curiosity and feedback from the audience, the presentations were promising and the young researchers expressed their hopes to see the projects materialise. Lucio Rossi, head of the HL-LHC project, awarded diplomas and congratulated all the participants on their creative ideas and hard work. Following up lively discussions about opportunities and challenges, the event paved the way to new encounters and future collaborations at CERN.