Atomic flashback: A century of the Bohr model

In July 1913, Niels Bohr published the first of a series of three papers introducing his model of the atom 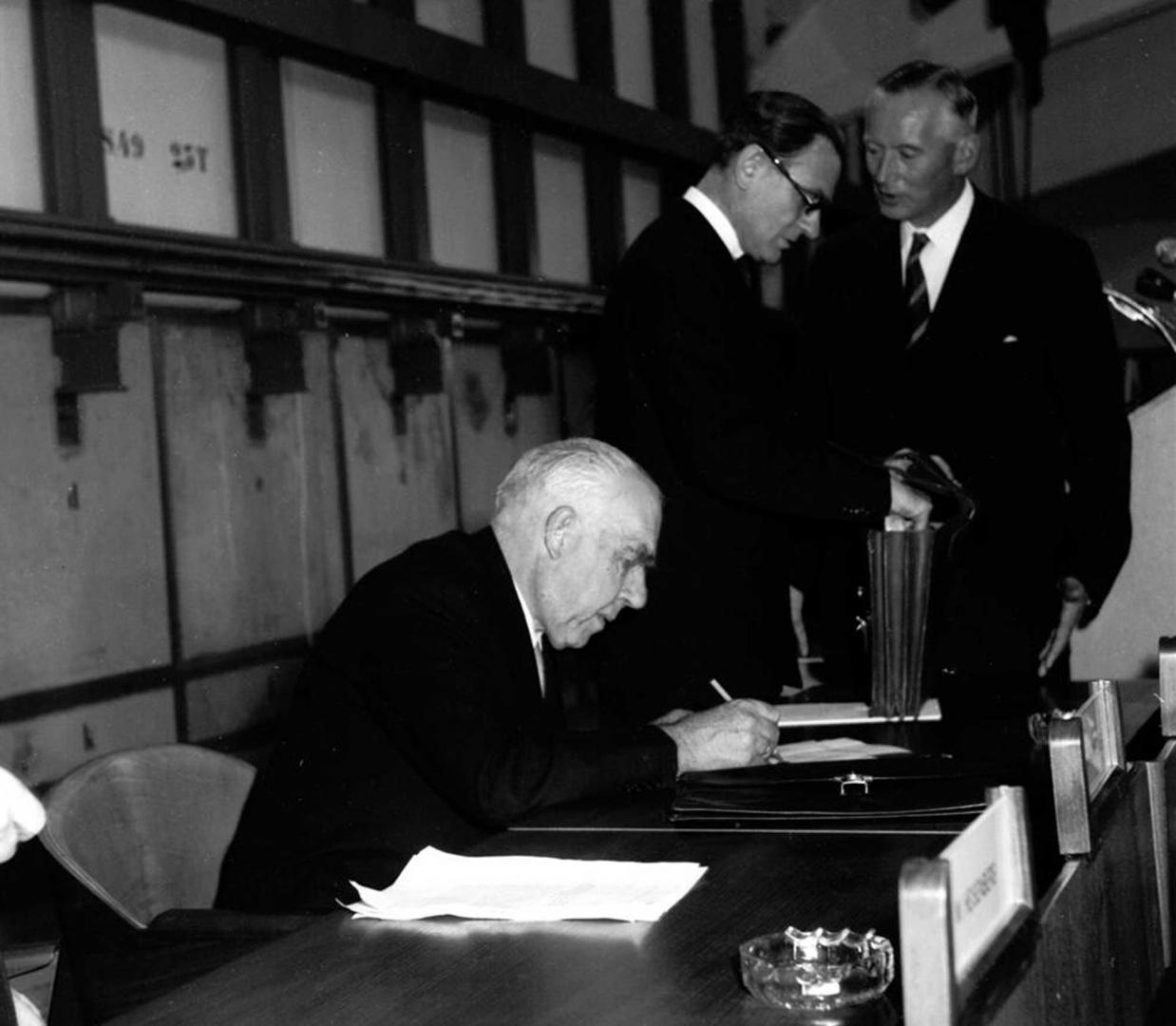 Niels Bohr, a founding member of CERN, signs the inauguration of the Proton Synchrotron on 5 February 1960. On the right are François de Rose and then Director-General Cornelius Jan Bakker (Image: CERN)

The most instantly recognizable image of an atom resembles a miniature solar system with the concentric electron paths forming the planetary orbits and the nucleus at the centre like the sun. In July of 1913, Danish physicist Niels Bohr published the first of a series of three papers introducing this model of the atom, which became known simply as the Bohr atom.

Bohr, one of the pioneers of quantum theory, had taken the atomic model presented a few years earlier by physicist Ernest Rutherford and given it a quantum twist.

Rutherford had made the startling discovery that most of the atom is empty space. The vast majority of its mass is located in a positively charged central nucleus, which is 10,000 times smaller than the atom itself. The dense nucleus is surrounded by a swarm of tiny, negatively charged electrons.

Bohr, who worked for a key period in 1912 in Rutherford’s laboratory in Manchester in the UK, was worried about a few inconsistencies in this model. According to the rules of classical physics, the electrons would eventually spiral down into the nucleus, causing the atom to collapse. Rutherford’s model didn’t account for the stability of atoms, so Bohr turned to the burgeoning field of quantum physics, which deals with the microscopic scale, for answers.

Bohr suggested that instead of buzzing randomly around the nucleus, electrons inhabit orbits situated at a fixed distance away from the nucleus. In this picture, each orbit is associated with a particular energy, and the electron can change orbit by emitting or absorbing energy in discrete chunks (called quanta). In this way, Bohr was able to explain the spectrum of light emitted (or absorbed) by hydrogen, the simplest of all atoms.

Bohr published these ideas in 1913 and over the next decade developed the theory with others to try to explain more complex atoms. In 1922 he was rewarded with the Nobel prize in physics for his work.

However, the model was misleading in several ways and ultimately destined for failure. The maturing field of quantum mechanics revealed that it was impossible to know an electron’s position and velocity simultaneously. Bohr’s well-defined orbits were replaced with probability “clouds” where an electron is likely to be.

But the model paved the way for many scientific advances. All experiments investigating atomic structure - including some at CERN, like those on antihydrogen and other exotic atoms at the Antiproton Decelerator, and at the On-Line Isotope Mass Separator ( ISOLDE) - can be traced back to the revolution in atomic theory that Rutherford and Bohr began a century ago.

"All of atomic and subatomic physics has built on the legacy of these distinguished gentlemen," says University of Liverpool’s Peter Butler who works on ISOLDE.