A bumper crop of LHC results at Quark Matter 2018 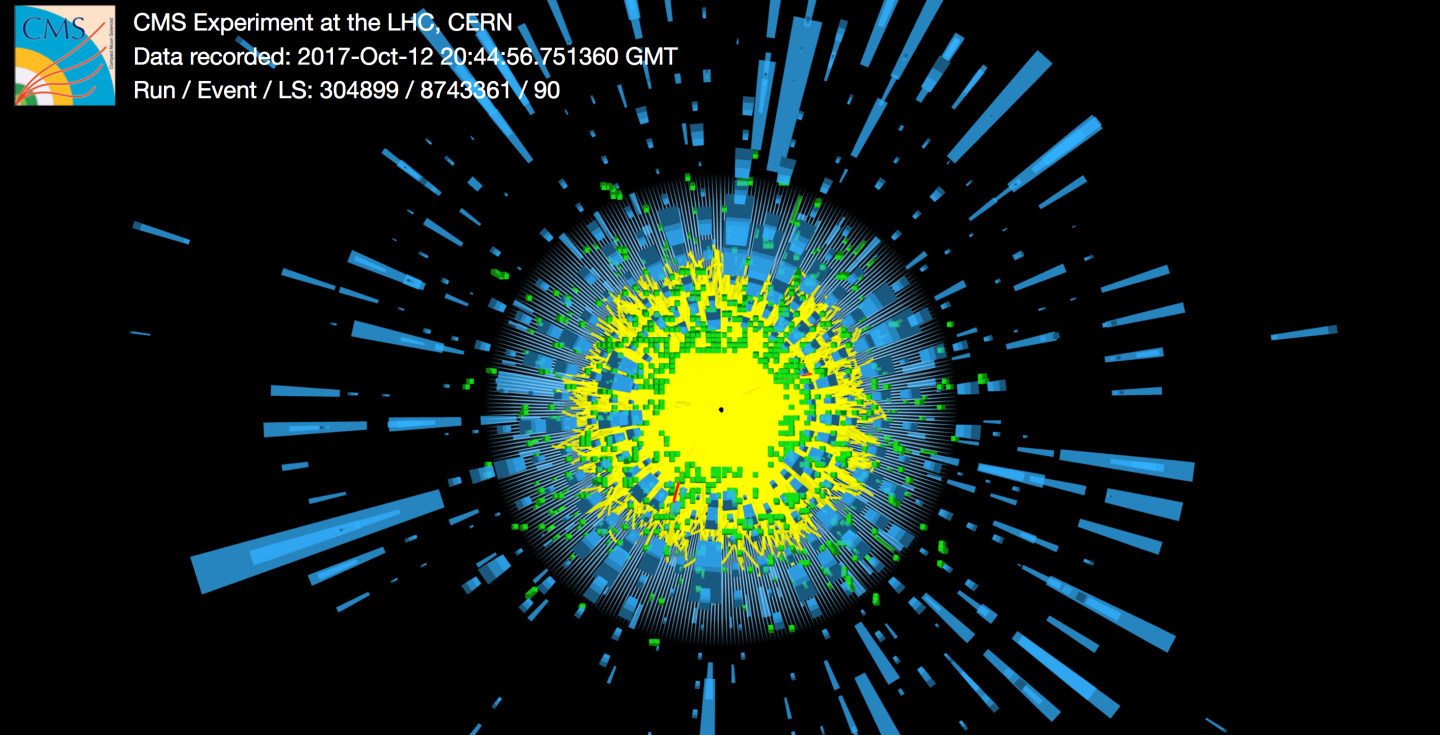 A xenon–xenon collision recorded by the CMS detector. (Image: CMS/CERN)

Some 900 nuclear physicists from all over the world are meeting this week in Venice, Italy, for Quark Matter 2018, the 27th International Conference on Ultrarelativistic Nucleus–Nucleus Collisions. The focus of the conference is the hot quark–gluon plasma (QGP) that is thought to have prevailed in the first millionths of a second after the Big Bang, and which can be created for a fleeting moment in collisions of atomic nuclei accelerated in the Large Hadron Collider (LHC). At the conference, the main LHC experiments (ALICE, ATLAS, CMS and LHCb) are presenting a wealth of new results from such collisions that provide insight into this extreme state of matter.

The ALICE collaboration is showcasing new measurements of how ordinary particles – from photons to nuclei and hypernuclei – are produced when the QGP created in the collisions cools down. The collaboration is also presenting new measurements of the dependence of particle production on the size of the colliding system, including measurements based on data from a one-day run in October 2017 in which nuclei of xenon (Xe), instead of protons (p) or lead (Pb) nuclei, were accelerated and collided in the LHC. Of particular interest is ALICE’s presentation of the first attempt at the LHC to measure the angular distribution of low-energy photons emitted from PbPb collisions – a measurement that probes the time evolution of the temperature and pressure of the QGP as it expands and cools down. Further improvements to the ALICE detector and larger data samples will be needed for high-precision measurements of this distribution, but the initial data already suggest that the system emits photons until rather late in the collision history. This is in contrast with the previous expectation that photon emission only happens in the early phases of the collision.

The ATLAS collaboration is reporting a wide range of new results. To highlight a few, ATLAS presents an intriguing modification of the opening-angle distribution for dimuons produced in PbPb collisions, which may indicate momentum broadening of muons by passage through the QGP. The collaboration also reports several measurements of jets in PbPb collisions, providing new results on the interaction between the jets and the QGP. In particular, it describes results on modification of jet internal structure and inclusive jet suppression measured up to 1 TeV. Further insight into jets is provided by studying jets associated with photons and by comparing XeXe data with PbPb data. ATLAS also presents final results on quarkonium suppression in PbPb collisions, with particular attention to contributions from prompt quarkonia, produced directly in the plasma, and particles that result from the decay of B mesons, typically outside the medium. A new technique of correlating harmonic amplitudes and transverse momentum in PbPb collisions is presented. Finally, ATLAS also provides insight into the collective behaviour of the plasma in small systems by comparing XeXe data with PbPb data.

The CMS collaboration is presenting a suite of new results based mostly on high-luminosity data from pp, pPb and PbPb collisions. Three of the analyses use the XeXe data from the short 2017 run. The XeXe data show that the production of charged particles depends on collision geometry, not the size of the colliding system. CMS also describes investigations of collective effects in small colliding systems, in which the charm quark is showing less collective behaviour than lighter quarks. The collaboration also presents results on the mechanism of jet quenching in the QGP with jets of particles recoiling from a high-momentum photon, observing a redistribution of some of the energy in the core of the jet to large distances from the jet axis. At the same time, the jet substructure in the core of the jet is hardly affected by the presence of the hot QGP medium. CMS continues to enrich its program of studying b (beauty) quarks, by adding the first measurement of Bs mesons in PbPb collisions and D mesons originating from the decay of beauty hadrons in pPb collisions, to study the role of quark–gluon recombination with strange quarks.

The LHCb collaboration is presenting an assortment of results on charm production in various types of collisions. These include the production of the Λc baryon in pPb collisions and of D0 and J/ψ mesons in proton collisions with He and Ar targets. The production of heavy quarks in nucleus–nucleus interactions is well suited to the study of the transition between ordinary hadronic matter and the QGP. The collaboration investigated this transition by studying the production of J/ψ mesons in nucleus–nucleus interactions, its possible suppression in the QGP medium and/or the subsequent charm–anti-charm quark recombination. Bound states of heavy quarks and antiquarks, such as the charmonium J/ψ and ψ(2S) as well as the bottomonium ϒ particles, are also important probes of the QGP; the rate of production of different bound states is expected to depend on the temperature of the QGP. The collaboration measured different ϒ states in pPb collisions at 8.16 TeV, showing that the LHCb detector is in a good position to study this physics sector.