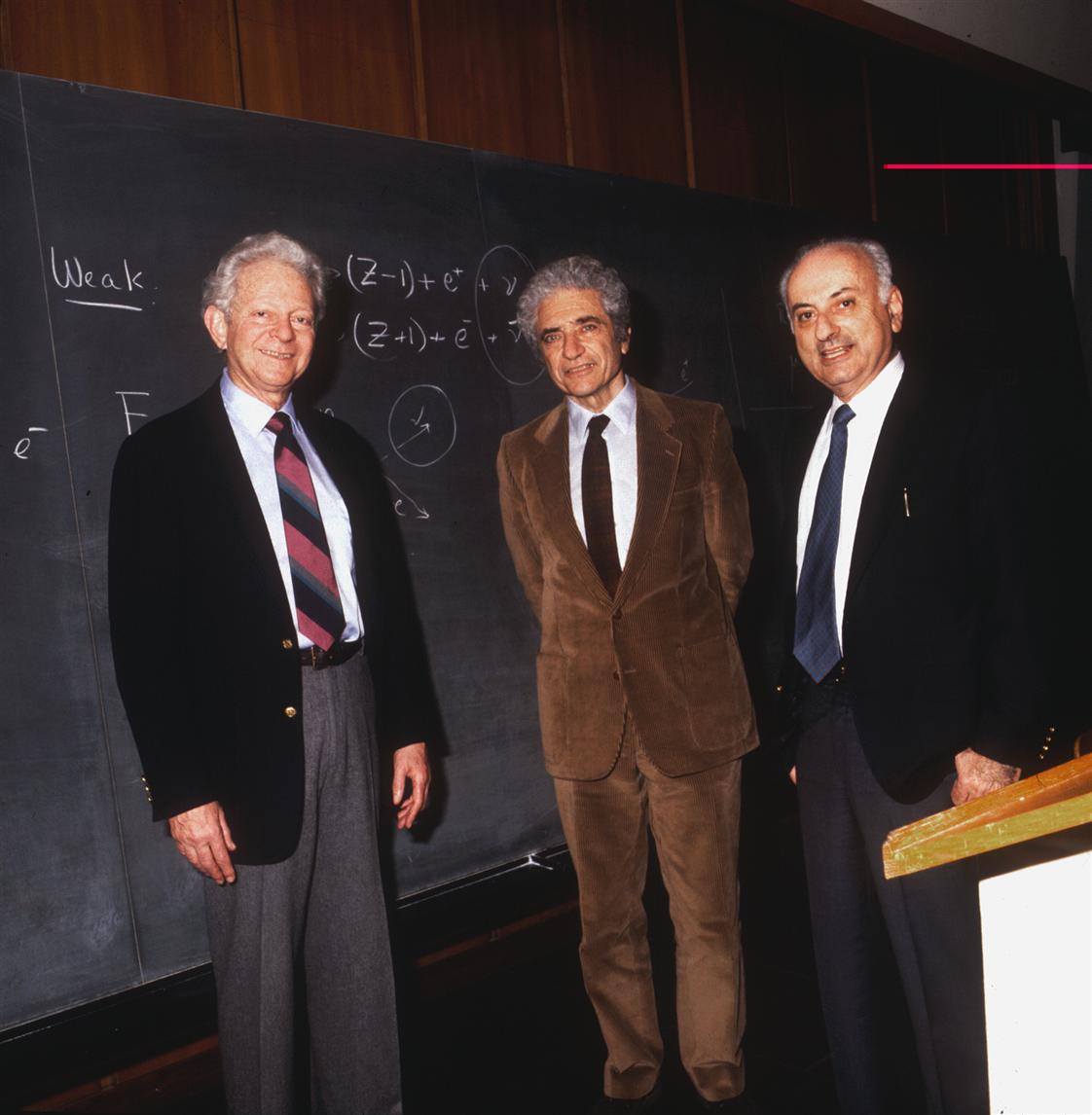 Leon Lederman, Jack Steinberger and Melvin Schwartz pose for a picture together in 1988, the year they were awarded the Nobel Prize for Physics. (Image: CERN)

Leon Lederman, a pioneering US experimental particle physicist who shared the Nobel Prize in Physics for the discovery of the muon neutrino, passed away on 3 October at the age of 96. Lederman’s career spanned more than 60 years and brought him to universities and laboratories all over the world, including time at CERN as a visiting scientist.

In the 1950s he contributed to two major physics results: the discovery of the long-lived neutral K meson at Brookhaven National Laboratory’s 3 GeV Cosmotron in 1956; and, in 1957, the observation of parity violation in the pion-muon-electron decay chain at the Nevis 385 MeV synchrocyclotron at Columbia University.

Lederman’s crowning achievement was the co-discovery of the muon neutrino in 1962 using Brookhaven’s Alternating Gradient Synchrotron (AGS). For this work, he shared the 1988 Nobel Prize in Physics with Jack Steinberger and the late Melvin Schwartz "for the neutrino beam method and the demonstration of the doublet structure of the leptons through the discovery of the muon neutrino."

At the end of the 1960s, in another experiment at the AGS, Lederman discovered the production of muon pairs with a continuous mass distribution in proton–nucleon collisions -- an unexpected phenomenon which was soon interpreted as the result of quark–antiquark annihilation. As a follow-up to this experiment, in collaboration with physicists from CERN, Columbia and Rockefeller Universities, Lederman proposed to study the production of electron–positron pairs at CERN’s Intersecting Storage Rings (ISR), which started operation in 1971. The experiment, known as R-103, discovered the production of neutral pions at high transverse momentum with a yield several orders of magnitude larger than expected. The result was again interpreted in terms of hard collisions between point-like proton constituents, demonstrating that these constituents also feel the strong interaction.

"I had the privilege of working with Leon at Columbia in 1969-70, when the R-103 experiment was proposed, and during the first years of ISR operation when he came to CERN,” says Luigi Di Lella of CERN. “I remember Leon as a physicist with enormous imagination, a boundless source of stimulating and often unconventional new ideas, which he always presented in a friendly and joyful atmosphere.”

As leader of the E70 and E288 experiments at Fermilab in the 1970s, Lederman also drove the effort that led to the discovery of the upsilon, the bound state of a bottom quark and antiquark, in 1977. But his influence on the field of particle physics permeates far beyond his specific areas of research. In particular, he was a passionate advocate of education and worked with government and schools to create opportunities for students and better integrate physics into public education.

Lederman was director of the Nevis Laboratories at Columbia from 1961 to 1978. In 1979, he became director of Fermilab, where his vision and strategic planning led to the construction of the Tevatron (which operated from 1987 to 2011 and was the world’s highest-energy accelerator before CERN’s Large Hadron Collider came along). He stepped down as Fermilab director in 1989 and joined the faculty of the University of Chicago and, later, the Illinois Institute of Technology.

Steinberger, who joined CERN six years after the muon-neutrino discovery and is now 97, also has fond memories of his collaboration with Lederman. “What I remember about Leon is that we worked together at the same labs, at Nevis and at Brookhaven, and we got the Nobel Prize together, with Mel Schwartz. It was for a non-trivial experiment. He was a good friend. I'm very sad that he's gone.”