Particle physicists are showcasing a wealth of brand new results from LHC experiments at CERN, at the “ICHEP 2016” conference in Chicago 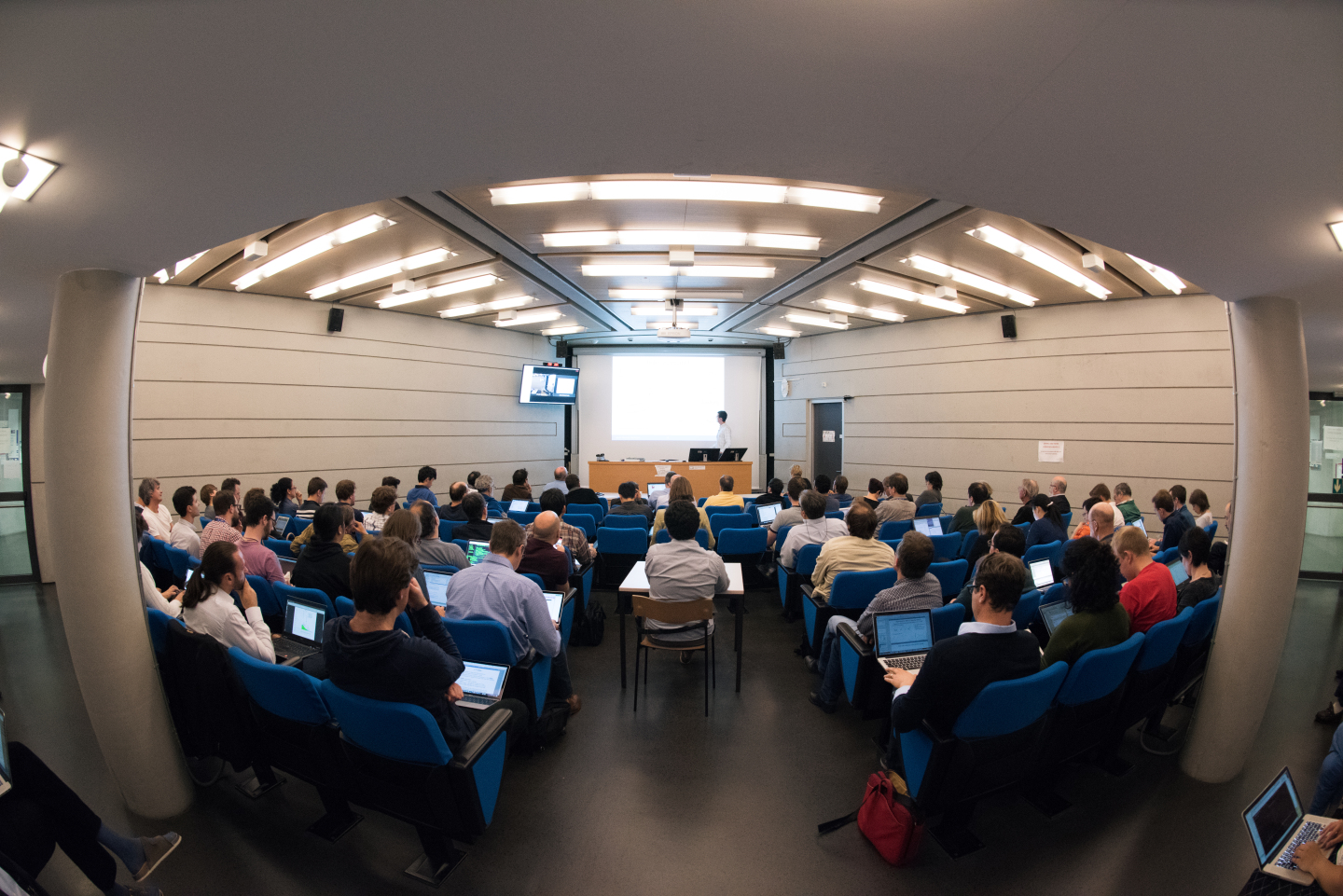 One of the many meetings at CERN where physicists prepared to showcase results at ICHEP. (Image: Maximilien Brice/ CERN)

Particle physicists are showcasing a wealth of brand new results from the Large Hadron Collider (LHC) experiments at CERN [1] at the “ICHEP 2016” [2] conference in Chicago. With a flood of new data, the experiment collaborations can now dive in and explore at the new energy frontier of 13 TeV, following last year’s first glimpse of physics at this unprecedented energy level. LHC collaborations are presenting more than 100 different new results, including many analyses based on newly taken 2016 data.

Thanks to the outstanding performances of the LHC, experiments have already recorded about 5 times more data in 2016 than in 2015, in just a few months of operations. The LHC surpassed its design luminosity in June – a parameter measuring the number of collisions per second. The peak luminosity reaches about 1 billion collisions per second so that even the rarest processes at the highest effective energy could occur. The LHC is thus running beyond expectations and the objective of 25 inverse femtobarn [3] of proton–proton collisions delivered to experiments for the whole of 2016 is within sight. The Worldwide LHC Computing Grid has stretched well beyond previous records, with more than 25 PB of data stored and processed since the beginning of the year.

“The LHC really entered a new regime by reaching its nominal luminosity, now exceeded by 20%,” said CERN Director for Accelerators and Technology, Frédérick Bordry. “It’s a major achievement and we can be confident that we will go beyond our goals for the full second run of the LHC.”

Physicists have been hard at work in the past months dealing with the huge amount of data recorded by the LHC experiments. With a larger data set now analysed, more precise measurements of the Standard Model processes and more sensitive searches for the direct production of new particles at the highest energy are possible. As an example, the 125 GeV Higgs boson, discovered in 2012, has now also been observed at the new energy of 13 TeV with higher statistical significance. In addition, both ATLAS and CMS experiments have made new precise measurements of Standard Model processes, especially looking for anomalous particle interactions at high mass, a very sensitive but indirect test for physics beyond the Standard Model.

“This is one of the most exciting times in recent years for physicists, as we dig into the unknown in earnest: the particle physics at an energy never explored before,” said CERN Director for Research and Computing, Eckhard Elsen.

ATLAS and CMS have also looked for any signs of the direct production of new particles predicted by Supersymmetry and other exotic theories of physics beyond the Standard Model, but no compelling evidence of new physics has appeared yet. In particular, the intriguing hint of a possible resonance at 750 GeV decaying into photon pairs, which caused considerable interest from the 2015 data, has not reappeared in the much larger 2016 data set and thus appears to be a statistical fluctuation.

LHCb are presenting many interesting new results as well, in the domain of flavour physics. A particular highlight is the discovery of the decay mode B0->K+K-, the rarest B-meson decay into a hadronic final state ever observed, as well as studies of unprecedented sensitivity of CP violation, a very subtle phenomenon explaining nature’s “preference” for matter over antimatter. LHCb have also conducted measurements that could help to reveal some new phenomena such as the first measurement of the photon polarisation in radiative decays of Bs mesons and determinations of the production cross-sections of several key processes at a collision energy of 13 TeV – some of which, at first sight, are at variance with current predictions.

All four experiments are presenting results from heavy ion collisions at the LHC. Amongst these, The ALICE Collaboration are presenting new measurements of the properties of quark-gluon plasma – a state of matter that existed a few millionths of a second after the Big Bang. ALICE physicists are studying how the nuclear forces are modified in this primordial state of matter. Researchers also measured the viscosity of the plasma at the new energy, showing that it flows almost like an ideal liquid, the same behaviour this is observed at lower collision energies.

“We're just at the beginning of the journey,” said CERN Director-General, Fabiola Gianotti. “The superb performance of the LHC accelerator, experiments and computing bode extremely well for a detailed and comprehensive exploration of the several TeV energy scale, and significant progress in our understanding of fundamental physics.”

Updates from the experiments: