The European Southern Observatory, founded on 5 October 1962, has close links with CERN 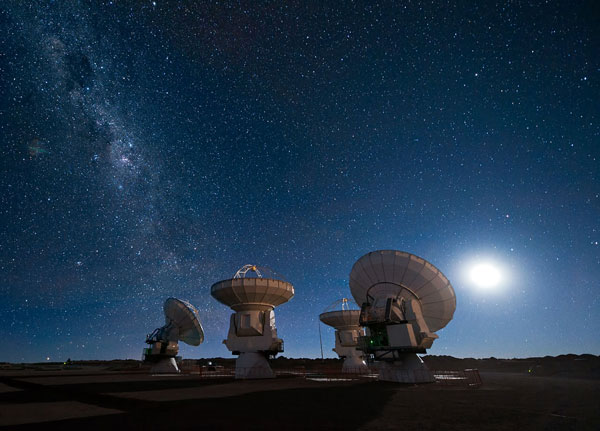 On 5 October 1962, five nations signed the convention that founded the European Southern Observatory (ESO). Now with 14 European member states, ESO’s main mission is to provide state-of-the-art research facilities to astronomers and astrophysicists, allowing them to conduct front-line science in the best conditions. From the start, there have been close connections with CERN, which plays a similar role in the field of particle physics.

With headquarters in Garching near Munich in Germany, ESO operates three observing sites high in the Atacama Desert region of Chile. These are home to a world-leading collection of observing facilities, including the New Technology Telescope, which introduced active optics, the Very Large Telescope, consisting of four 8.2 m telescopes, and the Atacama Large Millimeter Array (ALMA), which is still under construction, but already bringing exciting results.

The connections between CERN and ESO date back to the 1950s. The ESO convention was drafted by Jan Bannier and Gösta Funke - who were delegates of CERN Council for the Netherlands and Sweden, respectively – with key similarities to the CERN convention. In the 1970s, CERN collaborated with ESO on building the 3.6 m telescope. With its greater experience in building large-scale apparatus and in dealing with industry CERN was able to bring valuable expertise to the project and for several years a Telescope Project Division was based on CERN’s Meyrin site in Switzerland. The 3.6 m telescope has since gone on to be highly productive, most recently with the High Accuracy Radial velocity Planet Searcher (HARPS), the world’s foremost hunter of planets beyond the solar system.

ESO and CERN share a range of scientific interests and have held a number of joint conferences. Cosmology, dark matter, dark energy, high-energy gamma rays and neutrinos are among the topics that continue to link the two communities of scientists.

From the CERN Courier: