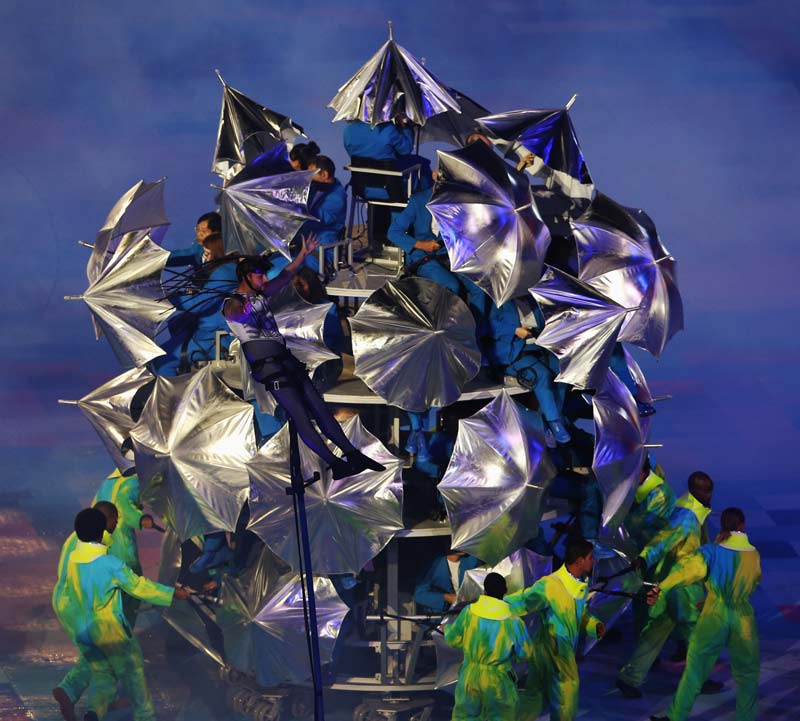 Dancers swirl umbrellas in a representation of the Higgs boson at the London Paralympics opening ceremony (Image: Getty)

London's Olympic stadium was transformed into the Large Hadron Collider (LHC) last night at the opening ceremony for the 2012 Paralympic games. Lights flashed around the stadium representing particles circulating in the LHC as cosmologist Stephen Hawking narrated: "The Large Hadron Collider at CERN is the largest most complex machine in the world, and possibly the universe…The recent discovery of what looks like the Higgs particle is a triumph of human endeavour and international collaboration. It will change our perception of the world..."

The 3-hour ceremony, titled Enlightenment, linked the ideas of enlightened thinking in science with enlightened thinking about disabled people in society. Hawking urged the audience: "Look up at the stars and not down at your feet. Try to make sense of what you see, and wonder about what makes the universe exist. Be curious."

Directed by Jenny Sealey of disability-theatre company Graeae, and Bradley Hemmings of Greenwich+Docklands Festivals, the ceremony followed the character of Miranda from Shakespeare's The Tempest as she opened her eyes to the wonders of the world around her. Led by Prospero, played by actor Ian McKellen, Miranda brought the audience on a journey of discovery of the beauty and wonder of science. Prospero showed an admirable understanding of the state of particle physics, telling Miranda "The best is yet to come."

Giant inflatable apples representing Newton's ideas on gravity floated over the stadium, as the 65,000-strong stadium audience was invited to tuck into apples. In other parts of the programme a giant flaming umbrella represented the big bang, and dancers performed with silver umbrellas in a representation of the Higgs boson.

The ceremony comes a month after Danny Boyle's extravagant Isles of Wonder, the opening ceremony for the Olympics, which saw ex-CERN scientist Tim Berners-Lee live-tweeting from under a floating house. Berners-Lee appeared sitting by a NeXT computer, the model he used to invent the World Wide Web at CERN in 1989. Tim Berners-Lee, who invented the World Wide Web at CERN in 1989, applauds by a NeXT computer during the Olympics opening ceremony on 27 July 2012 (Image: Getty)