The ALPHA collaboration reports the first ever measurement on the optical spectrum of an antimatter atom. This achievement features technological developments that open up a completely new era in high-precision antimatter research. 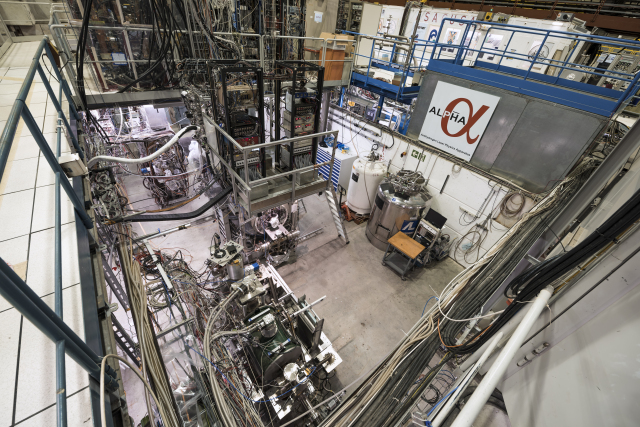 Geneva, 19 December 2016. In a paper published today in the journal Nature, the ALPHA collaboration reports the first ever measurement on the optical spectrum of an antimatter atom. This achievement features technological developments that open up a completely new era in high-precision antimatter research. It is the result of over 20 years of work by the CERN1 antimatter community.

“Using a laser to observe a transition in antihydrogen and comparing it to hydrogen to see if they obey the same laws of physics has always been a key goal of antimatter research,” said Jeffrey Hangst, Spokesperson of the ALPHA collaboration.

Atoms consist of electrons orbiting a nucleus. When the electrons move from one orbit to another they absorb or emit light at specific wavelengths, forming the atom's spectrum. Each element has a unique spectrum. As a result, spectroscopy is a commonly used tool in many areas of physics, astronomy and chemistry. It helps to characterise atoms and molecules and their internal states. For example, in astrophysics, analysing the light spectrum of remote stars allows scientists to determine their composition.

With its single proton and single electron, hydrogen is the most abundant, simple and well-understood atom in the Universe. Its spectrum has been measured to very high precision. Antihydrogen atoms, on the other hand are poorly understood. Because the Universe appears to consist entirely of matter, the constituents of antihydrogen atoms – antiprotons and positrons – have to be produced and assembled into atoms before the antihydrogen spectrum can be measured. It’s a painstaking process, but well worth the effort since any measurable difference between the spectra of hydrogen and antihydrogen would break basic principles of physics and possibly help understand the puzzle of the matter-antimatter imbalance in the Universe.

Today’s ALPHA result is the first observation of a spectral line in an antihydrogen atom, allowing the light spectrum of matter and antimatter to be compared for the first time. Within experimental limits, the result shows no difference compared to the equivalent spectral line in hydrogen. This is consistent with the Standard Model of particle physics, the theory that best describes particles and the forces at work between them, which predicts that hydrogen and antihydrogen should have identical spectroscopic characteristics.

The ALPHA collaboration expects to improve the precision of its measurements in the future. Measuring the antihydrogen spectrum with high-precision offers an extraordinary new tool to test whether matter behaves differently from antimatter and thus to further test the robustness of the Standard Model.

ALPHA is a unique experiment at CERN’s Antiproton Decelerator facility, able to produce antihydrogen atoms and hold them in a specially-designed magnetic trap, manipulating antiatoms a few at a time. Trapping antihydrogen atoms allows them to be studied using lasers or other radiation sources.

“Moving and trapping antiprotons or positrons is easy because they are charged particles,” said Hangst. “But when you combine the two you get neutral antihydrogen, which is far more difficult to trap, so we have designed a very special magnetic trap that relies on the fact that antihydrogen is a little bit magnetic.”

Antihydrogen is made by mixing plasmas of about 90 000 antiprotons from the Antiproton Decelerator with positrons, resulting in the production of about 25 000 antihydrogen atoms per attempt. Antihydrogen atoms can be trapped if they are moving slowly enough when they are created.  Using a new technique in which the collaboration stacks anti-atoms resulting from two successive mixing cycles, it is possible to trap on average 14 anti-atoms per trial, compared to just 1.2 with earlier methods. By illuminating the trapped atoms with a laser beam at a precisely tuned frequency, scientists can observe the interaction of the beam with the internal states of antihydrogen. The measurement was done by observing the so-called 1S-2S transition. The 2S state in atomic hydrogen is long-lived, leading to a narrow natural line width, so it is particularly suitable for precision measurement.

The current result, along with recent limits on the ratio of the antiproton-electron mass established by the ASACUSA collaboration, and antiproton charge-to-mass ratio determined by the BASE collaboration, demonstrate that tests of fundamental symmetries with antimatter at CERN are maturing rapidly.