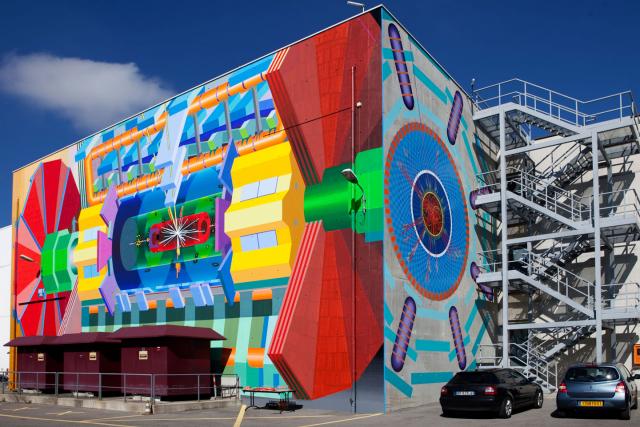 Geneva, 6 October 2010. The ATLAS1 collaboration at CERN2 today officially unveiled a giant mural depicting the ATLAS particle detector, which is currently collecting data at the world’s most powerful particle accelerator, the Large Hadron Collider. Installed in a cavern 100 metres underground, the ATLAS detector is no longer open for visits. The mural, painted on the wall of an ATLAS surface building by American artist Josef Kristofoletti, is three storeys tall yet still one-third the size of the actual detector. The mural is designed to be the next best thing to seeing the detector itself.

This is not the first depiction Kristofoletti has made of the ATLAS detector: it has a smaller relative that he painted for the Redux Contemporary Art festival in South Carolina. That was spotted by members of the collaboration, and resulted in the artist being invited to visit the real thing.

“We were thrilled to learn that ATLAS and particle physics had found their way into popular art,” said ATLAS physicist and outreach coordinator, Michael Barnett of the Lawrence Berkeley National Laboratory. “And it was a natural next step to bring that art to CERN.”

Inspired by the human creativity that goes into research at the frontier of knowledge, Kristofoletti was happy to accept the commission. “You just look at certain things and think, ‘wow, how are human beings able to do something so huge?’” he explained. “And that’s certainly the feeling I got from ATLAS. How is it really possible? It’s like a miracle that people are able to assemble something so complex.”

Kristofoletti explained what it is about the project that attracted him to particle physics. “What got me painting murals was working in Italy for a couple of years and seeing the frescos of the Renaissance,” he explained. “The subject of most of those works is religious mythology. When I think about the LHC, it always seems like an unprecedented cathedral of science. I think this will be a modern-day version of a Renaissance fresco. People enjoy having something that touches on both art and science. Humans have always tried to find out where we came from and where things originate, and I think that’s why this captures people’s imagination.”

CERN and the LHC have attracted considerable interest from the artistic community over recent years, and the laboratory has responded by starting to develop an artist in residence programme.

1. ATLAS is a particle physics experiment at the Large Hadron Collider at CERN. The ATLAS detector is searching for new discoveries in the head-on collisions of protons of extraordinarily high energy. ATLAS will learn about the basic forces that have shaped our Universe since the beginning of time and that will determine its fate. Among the possible unknowns are the origin of mass, extra dimensions of space, unification of fundamental forces, and evidence for dark matter candidates in the Universe. The ATLAS Collaboration is a virtual United Nations of 38 countries. The 3000 physicists come from more than 174 universities and laboratories and include 1000 students.
2. CERN, the European Organization for Nuclear Research, is the world's leading laboratory for particle physics. It has its headquarters in Geneva. At present, its Member States are Austria, Belgium, Bulgaria, the Czech Republic, Denmark, Finland, France, Germany, Greece, Hungary, Italy, the Netherlands, Norway, Poland, Portugal, Slovakia, Spain, Sweden, Switzerland and the United Kingdom. Romania is a candidate for accession. Israel is an Associate Member in the pre-stage to Membership. India, Japan, the Russian Federation, the United States of America, Turkey, the European Commission and UNESCO have Observer status.