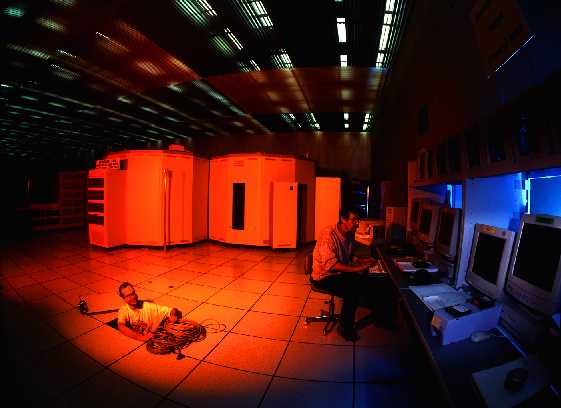 Geneva, 20 September 2001. The first phase of the LHC Computing Grid project was approved at an extraordinary meeting of the CERN1 Council on 20 September 2001. CERN is preparing for the unprecedented avalanche of data that will be produced by the multinational experiments at its new particle accelerator, the Large Hadron Collider (LHC), the most powerful device of its kind ever built.

Geneva, 20 September 2001. The first phase of the LHC Computing Grid project was approved at an extraordinary meeting of the CERN1 Council on 20 September 2001. CERN is preparing for the unprecedented avalanche of data that will be produced by the multinational experiments at its new particle accelerator, the Large Hadron Collider (LHC), the most powerful device of its kind ever built.

CERN's need for a dramatic advance in computing capacity is urgent. As from 2006, the four giant detectors observing trillions of elementary particle collisions at the LHC will accumulate over ten million Gigabytes of data, equivalent to the contents of about 20 million CD-ROMs, each year of its operation. A thousand times more computing power will be needed than is available to CERN today.

Nearly ten thousand scientists at hundreds of universities around the world will group in virtual communities to comb the data, searching for new physics. The strategy CERN has adopted to analyse and store this unprecedented amount of data is the coordinated deployment of Grid technologies at hundreds of institutes which will be able to search out and analyse information from an interconnected worldwide grid of tens of thousands of computers and storage devices.

The LHC Computing Grid project has two phases. The first phase activated in 2002 and continuing in 2003 and 2004 will develop the prototype equipment and techniques necessary for the data-intensive scientific computing of the LHC era. In 2005, 2006 and 2007 phase 2 of the project, building on the experience gained in the first phase, will construct the production version of the LHC Computing Grid.

Phase 1 of the project will require a 30 million Swiss Francs investment at CERN, which will be financed by individual contributions by CERN's Member States and major involvement of industrial sponsors. Over 50 positions for young IT professionals will be created in Phase 1 of the LHC Computing Grid project offering unique training possibilities. Young computer specialists in CERN's Member States, will be at the heart of the development of new data-intensive science computing and develop techniques and knowledge which will be invaluable.

Complementary investments are being made by participants in the LHC programme around the world, particularly in Europe, the US and Japan. CERN and its partners will form the first 'virtual organisation' to adapt Grid technologies to a giant data-intensive, worldwide, computing problem, but the challenge of analysing and storing very large quantities of data will be faced by governments, commercial companies, corporations and institutes in the near future.

The green light for Phase 1 of the LHC Computing Grid project starts another exciting phase of development in CERN's Large Hadron Collider project. The new accelerator will provide collisions at higher energies than ever before. The frequency of these collisions is far beyond anything which physicists have experienced and both the accelerator and the four giant experiments depend on the most advanced technologies available to scientists today. Computing will be the key link between this high-tech hardware and particle physicists, enabling them to make new breakthroughs, the immediate goal being the discovery of the Higgs Boson. Searching for a needle in a haystack is a legendarily difficult job, faced with the tremendously high collision rate in LHC, uniquely identifying a collision where a Higgs was produced will be equivalent to finding a needle in 20 million haystacks!

CERN is confident that the LHC Computing Grid project will give the international community of physicists working on the LHC the advanced infrastructure necessary to solve this seemingly impossible puzzle. At the same time it will provide a catalyst for Grid development around the globe.