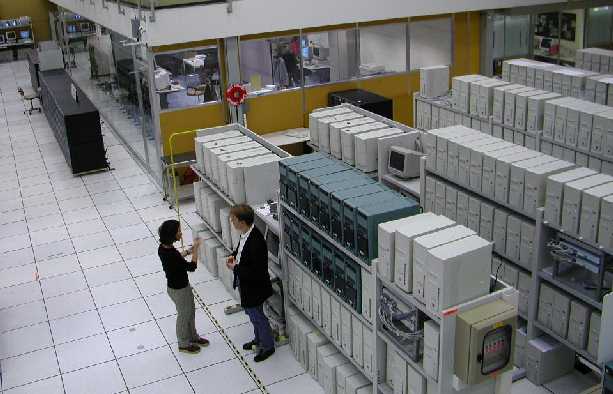 CERN1, the European Organization for Nuclear Research, in Geneva, Switzerland announced today the creation of the CERN openlab for DataGrid applications. Three leading Information Technology firms: Enterasys Networks, Intel and KPNQwest have joined CERN to push forward this groundbreaking project in advanced distributed computing. Each company will invest 2.5 MCHF ($1.5M) over a period of 3 years to help CERN achieve its ambitious objectives.

CERN1, the European Organization for Nuclear Research, in Geneva, Switzerland announced today the creation of the CERN openlab for DataGrid applications. Three leading Information Technology firms: Enterasys Networks, Intel and KPNQwest have joined CERN to push forward this groundbreaking project in advanced distributed computing. Each company will invest 2.5 MCHF ($1.5M) over a period of 3 years to help CERN achieve its ambitious objectives.

CERN is preparing for the unprecedented avalanche of data that will be produced by the multinational experiments at its new particle accelerator, the Large Hadron Collider (LHC), the most powerful device of its kind ever built.

"We are faced with the largest data-intensive computing application foreseen in this decade," says Manuel Delfino, Leader of CERN's Information Technology Division who will head the CERN openlab. "We are planning how to exploit and index the tidal wave of data produced by the LHC. We will certainly have to break new ground. However, similar challenges to the one we are meeting now will certainly be faced by many large corporations and institutions in the near future."

The LHC Computing Grid project has two phases. The first phase activated in 2002 and continuing in 2003 and 2004 will develop the prototype equipment and techniques necessary for the data-intensive scientific computing of the LHC era. In 2005, 2006 and 2007 phase 2 of the project, building on the experience gained in the first phase, will construct the production version of the LHC Computing Grid.

The World Wide Web was developed at CERN to face another challenge vital to the success of physics experiments - how to share information between collaborators working in laboratories and universities spread all over the globe. The Web has since become an essential tool in almost all walks of life. Work on distributed computing during the 1990s set the stage for the Grid concept, crystalized by Ian Foster and Carl Kesselman in 1999. The public and private sectors have funded a number of projects, mainly in the U.S. and Europe, which are cooperating to develop the Grid, in the same open way as the Internet was developed. CERN coordinates one of these efforts, the EU funded DataGrid project. An important aim of the CERN openlab for DataGrid applications is to take the results of these projects and apply them to provide the first large global testbed of this concept, the LHC Computing Grid.

The Web allows the rapid transfer of previously prepared information, but Grid technologies will be able to search out and analyse data from an interconnected worldwide grid of tens of thousands of computers and storage devices. This extra capability of analysis will empower researchers to exploit information that is stored world wide much more efficiently. Particle physics is the first community to exploit the potential of the Grid but meterologists, biologists and medical researchers amongst many others are joining Grid collaborations. Who knows - like the Web, Grid applications may eventually be taken for granted by an enormous community of users.

The three sponsors of the initiative are leaders in key technologies which CERN will use as pillars to build its giant data grid.

Steve Chase, Director, Business and Communication Solution Group of Intel commented: "Intel is proud to be instrumental to such a fundamental step forward in the advancement of scientific research and discovery. Intel's most powerful processor yet, the Itanium processor, finds in CERN's datagrid project a suitable application. The awesome computing power required, will find a formidable engine in the Itanium processor family."

Jack McMaster, President and CEO of KPNQwest, says: "The objective of CERN's data grid is to empower the collective brainpower of thousands of scientists around the world through peer-to-peer computing. It's a prime example of the power of the Internet and the future of collaborative working. We are proud to be part of this initiative and proud also that CERN is using KPNQwest's state-of-the-art fibre optic network to make its data available around the planet."

Chief Technology Officer for Enterasys Networks, John Roese said : "The aggregate data throughput for LHC data processing at CERN will exceed a sustained actual rate of one Terabit per second. Delivering an interconnected framework with such a capacity, between tens of thousands of computers, processors and storage devices provides a challenge. Enterasys is confident that its 10-Gigabit Ethernet technology will enable CERN to unlock the full potential of its DataGrid, and provide the immensely powerful and highly available infrastructure required by this data-intensive environment."

Starting from this initial collaboration with Information Technology firms, CERN expects other key technology providers, particularly in the storage and database fields, to join in sponsoring the CERN openlab in the near future. CERN openlab is a clear example of how interaction between fundamental research and industry can be mutually beneficial.