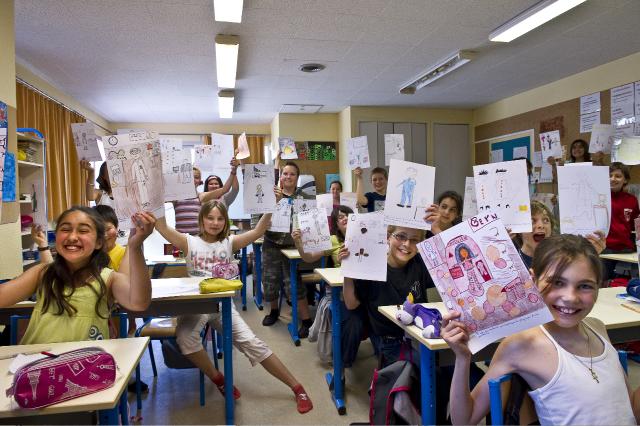 Geneva 3 June 2010. From 12 to 23 June 2010, CERN1 ’s Globe of Science and Innovation will be hosting the exhibition “Draw me a physicist”, featuring over 160 drawings and definitions by children on the subject of scientific research.

Geneva 3 June 2010. From 12 to 23 June 2010, CERN1 ’s Globe of Science and Innovation will be hosting the exhibition “Draw me a physicist”, featuring over 160 drawings and definitions by children on the subject of scientific research.

The exhibition is the result of a project conducted jointly by CERN and 20 primary school classes from the Pays de Gex and the Canton of Geneva. The six-month project had the goal of educating schoolchildren about the profession of research scientist and the world of research.

Some 400 schoolchildren aged 9 to 11 made drawings and came up with definitions in class on the profession of a physicist. Subsequently they came to CERN, visited one of the Laboratory’s sites, and met and interviewed some physicists. They then used the information garnered during the visit to make a second drawing and write a second definition. Each class or school then selected eight sets of drawings (both pre-visit and post-visit) for the exhibition in the Globe.

The imaginative, humorous and colourful drawings can be viewed on the second floor of the Globe. “The picture of the world of research we get from them is full of surprises,” explains Corinne Pralavorio, who handled the project on the CERN side. “It's a mirror, allowing us to see how young people out there perceive scientists.”

The project was conducted jointly with the local authorities from the French education system in the Pays de Gex and the Public Education Department of the Canton of Geneva. It also involved PhysiScope, an educational venture of the physics section of the University of Geneva and the research programme MaNEP (“Materials with Novel Electronic Properties”). The PhysiScope, whose objective is physics education through interactive experiments and games, has designed a series of activities on the different states of matter, suitable for all the Geneva classes. The physics section of the University of Geneva will host the exhibition this September.

Two classes agreed to be photographed and filmed for the duration of the project: a fourth-grade class from the Satigny-Village school in Switzerland and a fifth-grade class (CM2) from the school in Bois d’Ornex in France. The exhibition will thus include film and photographic material from these groups.

Space limitations make it impractical to display all the drawings, but they will be displayed on the project’s website from June 12, at www.cern.ch/dessine-moi-un-physicien.

«Draw me a physicist»
12-23 June
Second floor of the Globe of Science and Innovation
385, route de Meyrin