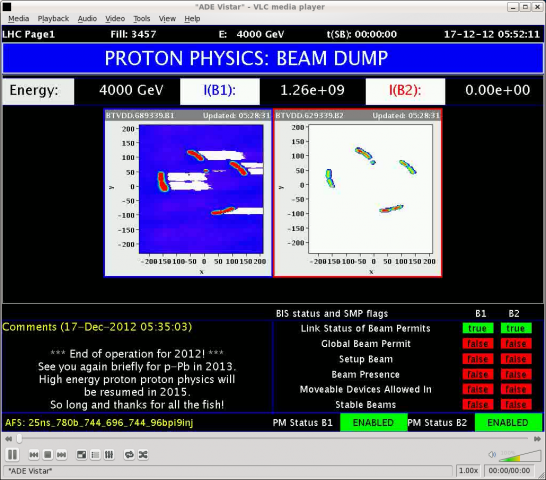 Screen shot of the last proton beam being dumped.

Geneva, 17 December 2012. This morning CERN1 completed the first LHC proton run. The remarkable first three-year run of the world’s most powerful particle accelerator was crowned by a new performance milestone. The space between proton bunches in the beams was halved to further increase beam intensity.

Geneva, 17 December 2012. This morning CERN1 completed the first LHC proton run. The remarkable first three-year run of the world’s most powerful particle accelerator was crowned by a new performance milestone. The space between proton bunches in the beams was halved to further increase beam intensity.

“This new achievement augurs well for the next LHC run starting in 2015,” said CERN’s Director for Accelerators and Technology, Steve Myers, “High intensity beams are vital for the success of the LHC programme. More intense beams mean more collisions and a better chance of observing rare phenomena.”

To put this into context, of the 6 million billion proton-proton collisions generated by the LHC, the ATLAS and CMS experiments have each recorded around 5 billion collisions of interest over the last three years. Of these, only around 400 produced results compatible with the Higgs-like particle whose discovery was announced in July.

A beam in the LHC is not a continuous string of particles, but is divided into hundreds of bunches, each a few tens of centimetres long. Each bunch contains more than a hundred billion protons. During the last few days, the space between bunches has been successfully halved, achieving the design specification of 25 nanoseconds rather than the 50 nanoseconds used so far. Halving the bunch spacing allows the number of bunches in the beam to be doubled. A record number of 2748 bunches was recorded in each beam last weekend, almost twice as many as the maximum reached previously in 2012, but at the injection energy of 450 GeV and without collisions. Several hours of physics were then performed with up to 396 bunches in each beam, spaced by 25 nanoseconds, each beam being accelerated to the energy of 4 TeV.

“The LHC’s performance has exceeded all expectations over the last three years,” said Steve Myers, “The accelerator delivered more than 6 million billion collisions and the luminosity has continuously increased. It’s a fantastic achievement, and I’m incredibly proud of my team.”

This year-on-year improvement in performance has allowed the LHC experiments to obtain important results quicker than expected. In addition to the spectacular discovery of a Higgs-like particle announced in July, the experiments have led to many other studies improving our understanding of fundamental matter.

At the beginning of 2013, the LHC will collide protons with lead ions before going into a long maintenance stop until the end of 2014. Running will resume in 2015 with increased collision energy of 13 TeV and another increase in luminosity.

1. CERN, the European Organization for Nuclear Research, is the world's leading laboratory for particle physics. It has its headquarters in Geneva. At present, its member states are Austria, Belgium, Bulgaria, the Czech Republic, Denmark, Finland, France, Germany, Greece, Hungary, Italy, the Netherlands, Norway, Poland, Portugal, Slovakia, Spain, Sweden, Switzerland and the United Kingdom. Romania is a candidate for accession. Israel and Serbia are associate members in the pre-stage to membership. India, Japan, the Russian Federation, the United States of America, Turkey, the European Commission and UNESCO have observer status.