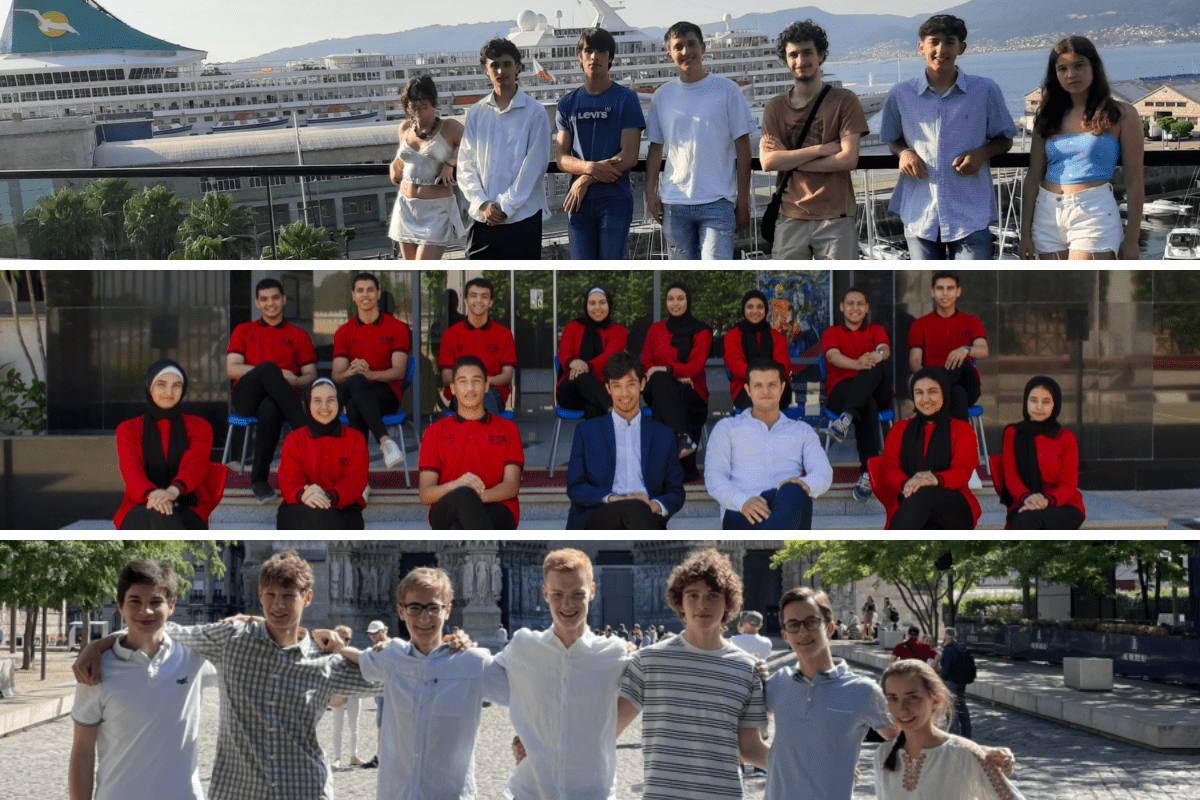 Geneva and Hamburg, 29 June 2022. Three teams of high-school students – from the Club de Física Enrico Fermi (Vigo, Spain), the Elsewedy Technical Academy (STA) (Cairo, Egypt) and the École du Sacré-Coeur (Reims, France) – have won the 2022 edition of the CERN Beamline for Schools competition. The prize for these talented students is a trip to CERN for the Spanish and Egyptian teams, and to DESY (Deutsches Elektronen-Synchrotron in Hamburg, Germany) for the French team, in autumn 2022, to perform their proposed experiments with the support of scientists from the two scientific research centres.

Beamline for Schools (BL4S)is a physics competition open to high-school students from all over the world. The participants are invited to submit their proposals for an experiment that uses a beamline. Beamlines are facilities that provide fluxes of subatomic particles that scientists use to conduct experiments in different fields spanning fundamental physics, medicine and material science. Operating a beamline requires particle accelerators like those running at CERN and DESY.

In 2022, for the first time since the beginning of the competition, three teams will have the opportunity to perform their proposed experiments: two teams at CERN and one at DESY. The fruitful collaboration on BL4S between the two institutions started in 2019, when CERN’s accelerators were shut down for maintenance and upgrades, and DESY hosted the winners and made it possible for the competition to continue. Even though CERN’s second long shutdown is now over, the German laboratory decided to continue supporting the competition by hosting an additional team that will run its experiment in parallel to their colleagues at CERN.

“I continue to be impressed by the quality of the students’ proposals, and this year I am particularly happy that CERN will again be able to welcome two of the three winning teams,” says Joachim Mnich, Director for Research and Computing at CERN. “Thanks to the strong engagement and innovative ideas of all the participants, this competition has once again created a unique environment that brings together science and high-school students."

Beamline for Schools was launched in 2014 to celebrate CERN’s 60th anniversary and, since then, more than 14 000 students from across the world have participated. The number of proposals submitted to the competition has been growing steadily in recent years, and this edition saw the participation of 304 teams representing 71 countries. A committee of scientists from both CERN and DESY carefully evaluated the experiment proposals and shortlisted 25 teams, from among which the winners were selected. In addition, one team won the prize for the most creative video proposal and six teams were recognised for the quality of the outreach activities they organised in their local communities, taking advantage of what they were learning through their participation in the competition. “Taking part in Beamline for Schools offers a unique opportunity to learn about particle physics and take the first steps in scientific research at a very early stage of a student’s career,” says Margherita Boselli, BL4S project manager. “By organising outreach activities, the teams are able to share their knowledge with different communities all around the world.”

The quality of the winning proposals shows that, with the right support, high-school students can tackle modern physics topics and develop a research plan. The Club de Física Enrico Fermi team from Spain intends to study the charge induced by the passage of ultra-relativistic charged particles in a class of gas detectors called multi-gap resistive plate chambers (MRPCs). They are interested in the relationship between the charge produced in the detector, the particles’ mass and the angle between the particle beam and the detector plane.

“Winning the competition not only demonstrates the hard work of our team in preparing the proposal,” says Iago Campos from the Club de Física Enrico Fermi, “but it also will give us the opportunity to be part of the particle physics community at CERN and perhaps start a career in research.”

The STA team from Egypt, the first Middle Eastern country to win this competition, will also work on MRPCs, but focusing on a different phenomenon. They will analyse the detection efficiency of the MRPCs when the gas usually used by these detectors is replaced by a more environmentally friendly one.

“This competition has changed my approach to school and taught me how to write a scientific proposal,” says Mohab Mahmoud Ezzat Mahmoud Mohamed Ramadan from the STA team. “Winning the competition gives us further motivation to continue what we started.”

The Supercooling team from France decided to test an innovative particle detection technique that relies on the phase transition between liquid and solid water. Inspired by the detection principle used in cloud and bubble chambers, the students will investigate the detection efficiency of water in the supercooled state, where the passage of highly energetic particles could induce a phase transition from liquid to solid.

“Beamline for Schools helped us to create a close-knit team and to match everyone’s ability to achieve the best version of ourselves,” says Brewen Le Grand from the Supercooling team. His teammate Clémence Calvet adds: “This competition is an incredible experience to acquire new skills, new knowledge and dive into the world of physics.”

“I am thrilled that we will again host a school this autumn in the context of the Beamline for Schools initiative at DESY,” says Beate Heinemann, Scientific Director for Particle Physics at DESY. “We look forward to the visit of the French school that will explore a new way of tracking charged particles at our test beam at the DESY II accelerator. I congratulate all three of the winning teams!”

Beamline for Schools is an education and outreach project funded by the CERN & Society Foundation and supported by individual donors, foundations and companies. The ninth edition is supported by the Arconic Foundation and the Wilhelm and Else Heraeus Foundation, with additional contributions from Amgen Switzerland.

Next year, Beamline for Schools will celebrate its 10th edition: the participation rate and the success of recent editions show that the competition is an inspiring project for young generations of students.

CERN, the European Organization for Nuclear Research, is one of the world's leading laboratories for particle physics. The Organization is located on the French–Swiss border, with its headquarters in Geneva. Its Member States are: Austria, Belgium, Bulgaria, Czech Republic, Denmark, Finland, France, Germany, Greece, Hungary, Israel, Italy, Netherlands, Norway, Poland, Portugal, Romania, Serbia, Slovakia, Spain, Sweden, Switzerland and the United Kingdom. Cyprus, Estonia and Slovenia are Associate Member States in the pre-stage to Membership. Croatia, India, Latvia, Lithuania, Pakistan, Türkiye and Ukraine are Associate Member States. Japan and the United States of America currently have Observer status, as do the European Union and UNESCO. The Observer status of the Russian Federation and of JINR is suspended in accordance with the CERN Council Resolutions of 8 March 2022 and 25 March 2022, respectively.

About the CERN & Society Foundation

The CERN & Society Foundation is a non-profit charitable foundation that supports projects in the fields of scientific education and outreach, innovation and knowledge exchange and culture and creativity. The Foundation operates thanks to the generous contributions from individuals, foundations and companies that make these projects happen and spread the CERN spirit of scientific curiosity for the benefit of society.

DESY is one of the world’s leading particle accelerator centres. Researchers use the large-scale facilities at DESY to explore the microcosm in all its variety – ranging from the interaction of tiny elementary particles to the behaviour of innovative nanomaterials, the vital processes that take place between biomolecules and the great mysteries of the universe. The accelerators and detectors that DESY develops and builds at its locations in Hamburg and Zeuthen are unique research tools. DESY is a member of the Helmholtz Association and receives its funding from the German Federal Ministry of Education and Research (BMBF) (90 per cent) and the German federal states of Hamburg and Brandenburg (10 per cent).