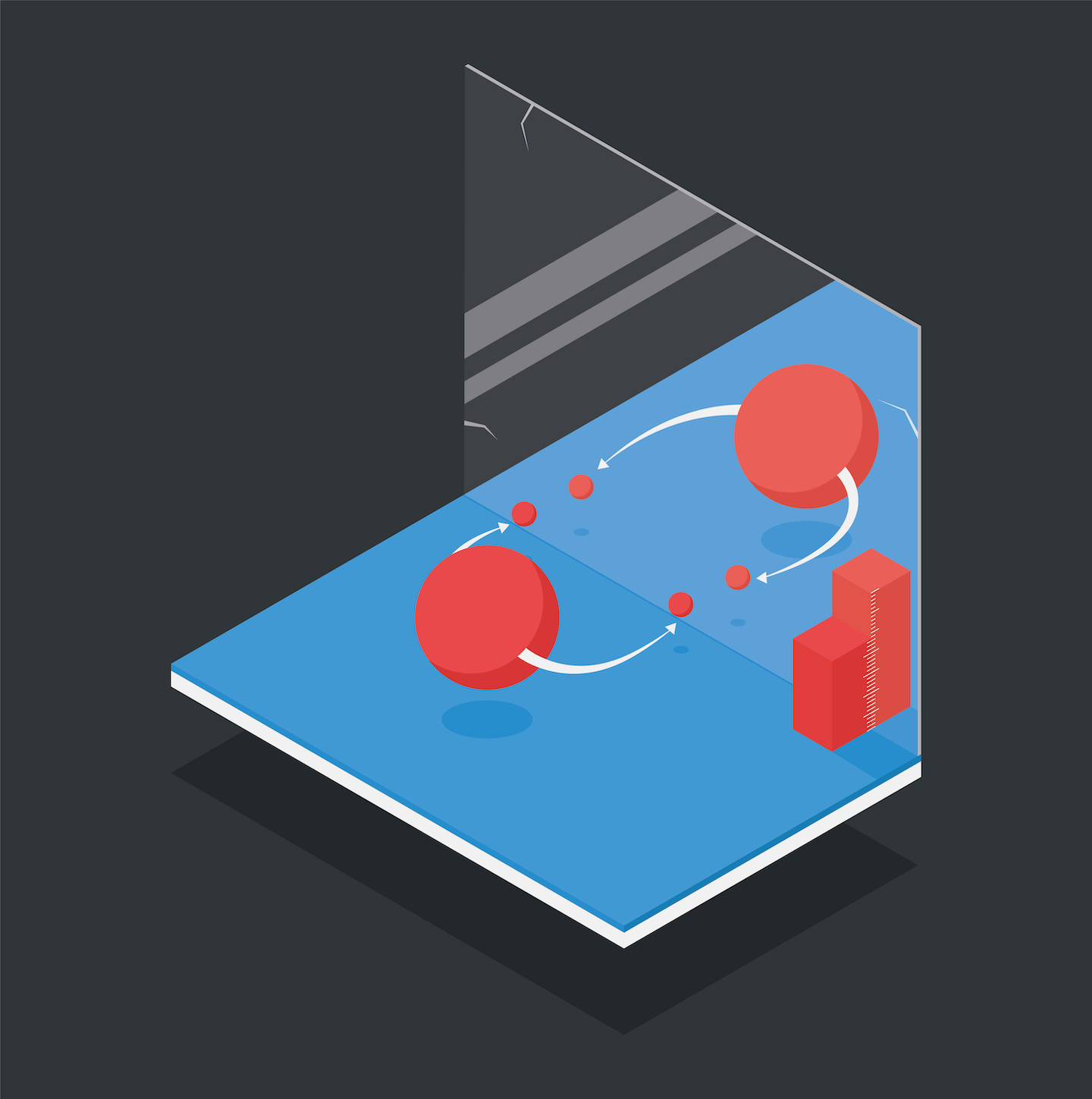 A CP-symmetry transformation swaps a particle with the mirror image of its antiparticle. The LHCb collaboration has observed a breakdown of this symmetry in the decays of the D0 meson (illustrated by the big sphere on the right) and its antimatter counterpart, the anti-D0 (big sphere on the left), into other particles (smaller spheres). The extent of the breakdown was deduced from the difference in the number of decays in each case (vertical bars, for illustration only) (Image: CERN)

The LHCb collaboration at CERN has seen, for the first time, the matter–antimatter asymmetry known as CP violation in a particle dubbed the D0 meson. The finding, presented today at the annual Rencontres de Moriond conference and in a dedicated CERN seminar, is sure to make it into the textbooks of particle physics.

“The result is a milestone in the history of particle physics. Ever since the discovery of the D meson more than 40 years ago, particle physicists have suspected that CP violation also occurs in this system, but it was only now, using essentially the full data sample collected by the experiment, that the LHCb collaboration has finally been able to observe the effect,” said CERN Director for Research and Computing, Eckhard Elsen.

The term CP refers to the transformation that swaps a particle with the mirror image of its antiparticle. The weak interactions of the Standard Model of particle physics are known to induce a difference in the behaviour of some particles and of their CP counterparts, an asymmetry known as CP violation. The effect was first observed in the 1960s at Brookhaven Laboratory in the US in particles called neutral K mesons, which contain a “strange quark”, and, in 2001, experiments at the SLAC laboratory in the US and the KEK laboratory in Japan also observed the phenomenon in neutral B mesons, which contain a “bottom quark”. These findings led to the attribution of two Nobel prizes in physics, one in 1980 and another in 2008.

CP violation is an essential feature of our universe, necessary to induce the processes that, following the Big Bang, established the abundance of matter over antimatter that we observe in the present-day universe. The size of CP violation observed so far in Standard Model interactions, however, is too small to account for the present-day matter–antimatter imbalance, suggesting the existence of additional as-yet-unknown sources of CP violation.

The D0 meson is made of a charm quark and an up antiquark. So far, CP violation has only been observed in particles containing a strange or a bottom quark. These observations have confirmed the pattern of CP violation described in the Standard Model by the so-called Cabibbo-Kobayashi-Maskawa (CKM) mixing matrix, which characterises how quarks of different types transform into each other via weak interactions. The deep origin of the CKM matrix, and the quest for additional sources and manifestations of CP violation, are among the big open questions of particle physics. The discovery of CP violation in the D0 meson is the first evidence of this asymmetry for the charm quark, adding new elements to the exploration of these questions.

To observe this CP asymmetry, the LHCb researchers used the full dataset delivered by the Large Hadron Collider (LHC) to the LHCb experiment between 2011 and 2018 to look for decays of the D0 meson and its antiparticle, the anti-D0, into either kaons or pions. “Looking for these two decay products in our unprecedented sample of D0 particles gave us the required sensitivity to measure the tiny amount of CP violation expected for such decays. Measuring the extent of the violation then boiled down to counting the D0 and anti-D0 decays and taking the difference,” explained Giovanni Passaleva, spokesperson for the LHCb collaboration.

The result has a statistical significance of 5.3 standard deviations, exceeding the threshold of 5 standard deviations used by particle physicists to claim a discovery. This measurement will stimulate renewed theoretical work to assess its impact on the CKM description of CP violation built into the Standard Model, and will open the window to the search for possible new sources of CP violation using charmed particles.

Follow the webcast of the CERN seminar at 11.00 a.m. Geneva time.
For more information, see the LHCb website and the paper describing the results.