The 2016 physics season starts at the LHC

The LHC and its experiments are back in action, now taking physics data for 2016 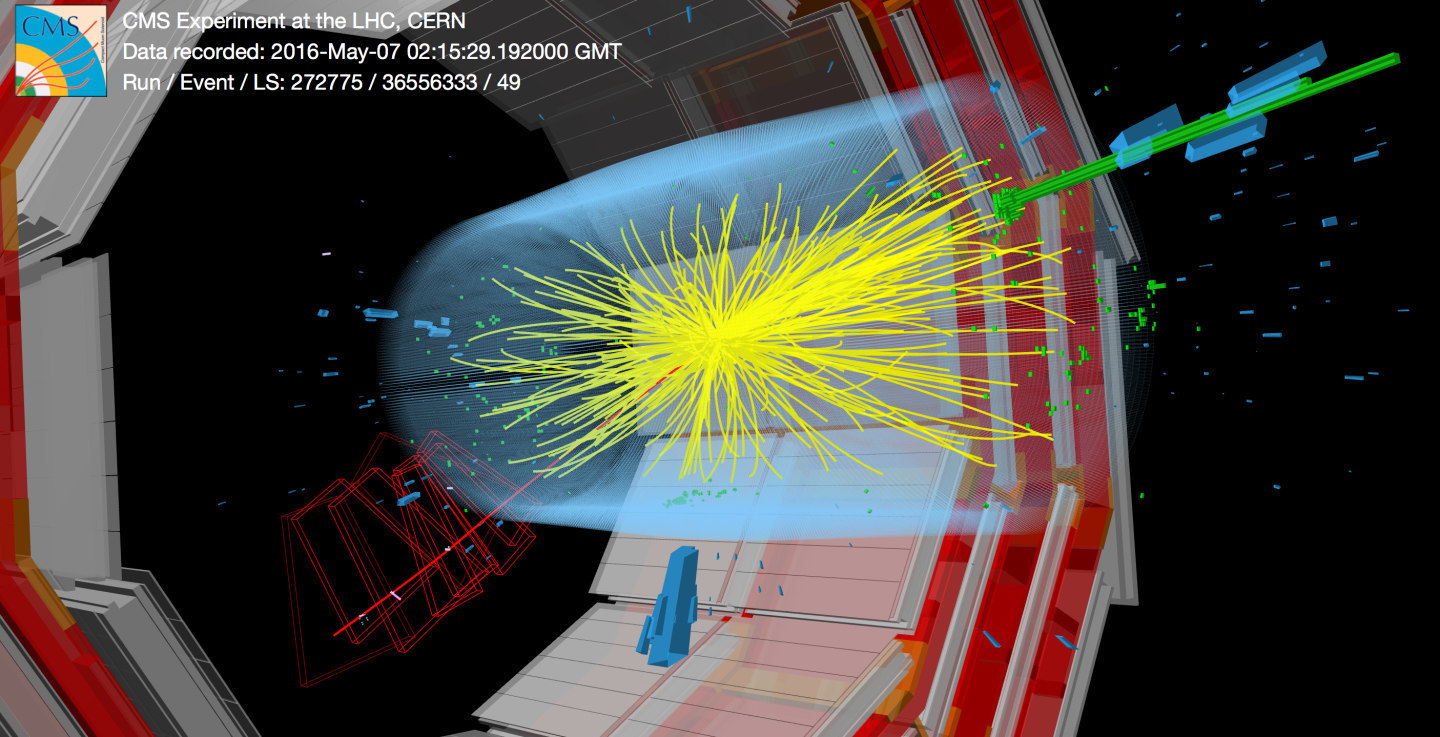 An image of a proton–proton collision taken in the CMS detector on 7 May. (Image: Tom McCauley/CMS)

The Large Hadron Collider (LHC) and its experiments are back in action, now taking physics data for 2016 that will give us an improved understanding of fundamental physics.

On Friday, 25 March the most powerful collider in the world was switched back on after its annual winter break. The accelerator complex and experiments have been fine-tuned using low-intensity beams and pilot proton collisions, and now the LHC and the experiments are ready to take an abundance of data.

The LHC operators will now increase the intensity of the beams so that the machine produces a larger number of collisions.

“The LHC is running extremely well,” says CERN Director for Accelerators and Technology, Frédérick Bordry. “We now have an ambitious goal for 2016, as we plan to deliver around six times more data than in 2015.”

“The restart of the LHC always brings with it great emotion,” says Fabiola Gianotti, CERN Director General. “With the 2016 data, the experiments will be able to perform improved measurements of the Higgs boson and other known particles and phenomena, and look for new physics with an increased discovery potential.”

This is the second year the LHC will run at a collision energy of 13 TeV. During the first phase of Run 2 in 2015, operators mastered steering the accelerator at this new higher energy by gradually increasing the intensity of the beams.

Beams are made of “trains” of bunches, each containing around 100 billion protons, moving at almost the speed of light around the 27-kilometre ring of the LHC. These bunch trains circulate in opposite directions and cross each other at the centre of experiments. Last year, operators increased the number of proton bunches up to 2244 per beam, spaced at intervals of 25 nanoseconds. These enabled the ATLAS and CMS collaborations to study data from about 400 million million proton–proton collisions. In 2016, operators will increase the number of particles circulating in the machine and the squeezing of the beams in the collision regions. The LHC will generate up to 1 billion collisions per second in the experiments.

“In 2015, we opened the doors to a completely new landscape with unprecedented energy. Now we can begin to explore this landscape in depth,” says CERN Director for Research and Computing, Eckhard Elsen.

The physics run with protons will last six months. The machine will then be set up for a four-week run colliding protons with lead ions.

The four largest LHC experimental collaborations, ALICE, ATLAS, CMS and LHCb, now start to collect and analyse the 2016 data. Their broad physics programme will be complemented by the measurements of three smaller experiments – TOTEM, LHCf and MoEDAL – which focus with enhanced sensitivity on specific features of proton collisions.