Return of the LHC – season 2 continues 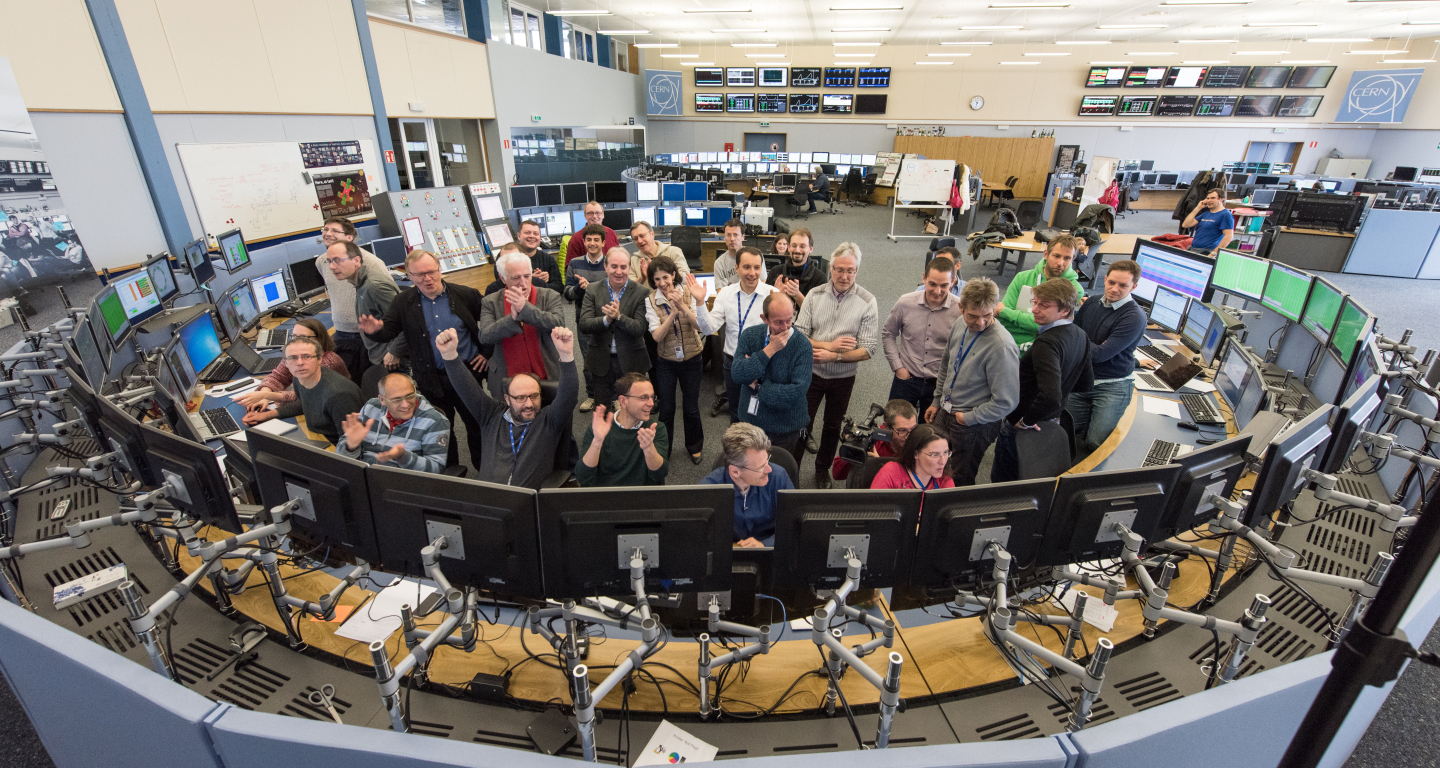 Applause in the LHC control room as the first particles began circulating in the LHC (image: Maximillien Brice/CERN)

On Friday 25 March, the Large Hadron Collider (LHC) opened its doors to allow particles to travel around the ring for the first time since the year-end technical stop (YETS) began in December 2015. At 10.30 am, a first bunch was circulating and by midday the beam was circulating in both directions.

2015 saw the start of Run 2 for the LHC, the largest accelerator in the world where the LHC reached a proton-proton collision energy of 13 TeV -- the highest ever reached by a particle accelerator. Beam intensity also increased and, by the end of 2015, 2240 protons bunches per beam were being collided. This year, the aim is to increase the number of bunches even further to the target of 2748.

Beams are made of “trains” of proton bunches moving at almost the speed of light around the 27 kilometre ring of the LHC. By sending more bunches around the ring the LHC will be able to generate more collisions, meaning more physics data for the experiments.

Powering tests finished on 18 March 2016, and in the following week the LHC has been undergoing the final phase of preparation before beam. This phase is known as machine checkout, during which all the systems of the LHC, such as the magnetic circuits and collimators, are put through their paces without beam. This includes ramping all hardware up to their high-energy values and testing the “squeeze” process. By adjusting magnet strengths either side of a given experiment,  the squeeze reduces the beam size at the interaction point thereby increasing the collision rate.

“Following the machine checkout, the LHC team works with low intensity beam for about 3 to 4 weeks to re-commission all systems and to check out all aspects of beam-based operation to make sure that the LHC is fully safe before stable beams is declared,” Mike Lamont of the Operations team explains. Stable beams are the signal that the experiments can start taking data.

In 2016 the LHC will continue to open the path for new discoveries by providing up to 1 billion collisions per second to its experiments as it continues Run 2. The goal this year is to reach an integrated luminosity of around 25 fb-1, up from the 4 fb-1 it reached by the end of last year. Luminosity is an essential indicator of the performance of an accelerator, measuring the potential number of collisions that can occur in a given amount of time. Integrated luminosity is the accumulated number of potential collisions. The inverse femtobarn (fb-1) is the unit used by physicists to measure the integrated luminosity; 1 fb-1 corresponds to around 80 million million collisions.

More information on the first beams seen by the ATLAS and CMS experiments available on their websites.