The birds and the beams: Biodiversity at CERN 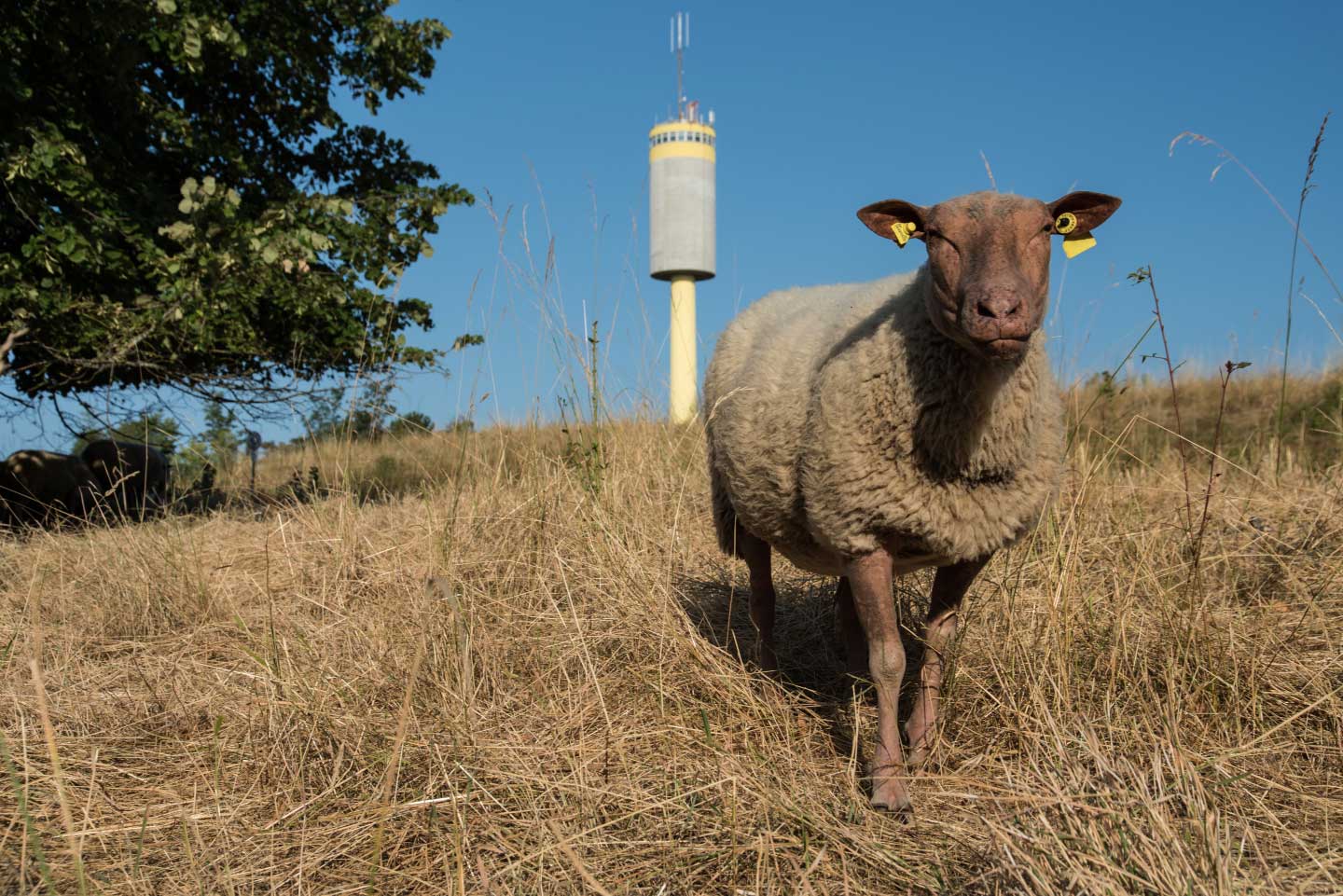 A member of the CERN flock grazes on the roof of the Intersecting Storage Rings, with the laboratory's distinctive yellow water tower behind her (Image: Maximilien Brice/CERN)

It's 7am at CERN and sheep are grazing on the roof of the world's first hadron collider.

Though the Intersecting Storage Rings have lain dormant since 1984, this morning the air resonates with the sound of bells and bleating as shepherd Enrico D'Ippolito inoculates his herd. Kin, the 3-year-old border collie, jumps against makeshift metal gates, whining and snapping to keep the ewes moving. "They're very sweet-natured," grins D'Ippolito. "And they keep me busy!"

The family has grazed sheep on CERN land for more than 45 years, when Enrico’s father Mario moved to the area from a village near Rimini in Italy. D'Ippolito senior was 18 years old when he started working in the vineyards around CERN before moving into shepherding. Now in his seventies, he strikes an imposing figure, tanned and broad-shouldered in a striped T-shirt.

D'Ippolito started with a herd of 100 ewes, a domestic breed native to France that translates as "Red of the West". Today on the ISR, there are still 90 or so, bred for meat, bleating away, chewing the thick grass, and browsing the shrubs.

Enrico wears blue overalls on the job – a practical choice, as later in the day he'll be back at his second job, repairing 4 x 4s at his garage in the nearby Swiss village of Satigny. "I've helped my dad with the herd since I was a kid," he says. "There were fewer buildings at CERN back then; more space for the sheep. [Now] we graze the places that are hard to work for the gardeners."

Alexandre Fournier leads a team of five landscape gardeners at CERN through the company ISS. The team is responsible for maintaining some 100 hectares of green spaces at CERN, of which 50 ha are parking lots. Fournier has been here since his apprenticeship in 2007, and says he wanted to stay on at CERN as he enjoys maintaining such a large and varied site. The laboratory covers a total area of ​​650 ha. A fenced area consists of 211 ha spread over 15 sites on both sides of the Franco-Swiss border. The 415 ha outside this are a patchwork of cultivated fields or meadows used by farmers, as well as woodland. There's even a reed-filled pond up by point 6 on the Large Hadron Collider (LHC).

"If a tree falls on an important building for CERN – cryogenics or what have you – we have to be there," he says. "We also protect the flora and fauna on the site. We choose where and when to mow – leaving protected areas for orchids, for example, allowing them to complete their life cycles so that they will be there next year."

Orchids are a point of pride for the team. "CERN has the largest wild orchid population in the Lake Geneva basin," says Mathieu Fontaine, who leads the 'Green Spaces' team. "No fewer than 16 species grow here, and we have five hectares of dry grasslands classified as 'orchid zones'; dedicated to them. Because of the history of the site – with all the maintenance, building, no added nutrients or pesticides – the soils are relatively poor, and the orchids love that."

Most common on the sites are the pyramidal orchid (Anacamptis pyramidalis) and the man orchid (Acerae antropophorum). You also find Oryphus apifera, the bee orchid; whose center looks like a bee, better to attract those insects. Himantoglossum robertianum is a rare species in the region, and the last time it was observed at CERN was two years ago. There are also the charmingly named goat (Himantoglossum hircinum) and monkey orchids (Orchis simia).

But Fournier stresses that the green spaces are not just about conservation. They are also places of work. "A fountain here, a cycle path, or trees that throw shade in the right places. If a scientist has a place to sit and think in the shade, to the sounds of birdsong or running water, I imagine that can be really beneficial for their work."

By CERN's main restaurant, where graduate students lock intellectual horns with Nobel prize winners, sparrows bathe in the dust, beaks agape. Kites and buzzards fly overhead, magpies and the odd Eurasian jay resting on a bough. There are songbirds too: tits, finches, warblers, chaffinches, siskins and more. CERN buildings, some built in the 1950s, provide ample nooks and crannies for nesting. Swallows populate the eaves, and sparrows find holes below the roof.

There are grass snakes in the meadows, and Fournier tells me, even beavers in the river bordering Prévessin. Spend enough time by the trees in a CERN meadow and sooner or later you'll catch a glimpse of the fallow deer (Dama dama) that make the woods their home. CERN's 136 ha of forest, where oak, ash, wild cherry, hazel, hawthorn and more grow, are managed in partnership with the French National Forestry Office (Office National des Forêts).

"As the CERN sites are made available by the Swiss Confederation and the French state, a part of my work falls under 'relationships with host states'," says Fontaine. Even d'Ippolito's sheep have to have 'passports' in the form of a yellow eartag, its number reported to the customs office at the border.

"As we have land that is neither treated nor cultivated or worked – it is bound to have rare plants and animals," says Fontaine. "[But] CERN's business is physics, so making species lists has not been a priority." So far, apart from orchids, no exhaustive species lists have been compiled.

But a club recently founded at CERN may change all that.

"We have rich meadows at CERN – true ecological niches for insects such as bees, who are, for us the sentinels of the environment," says CERN mechanic Patrick Blaise, an amateur beekeeper who is president of CERN's latest official club, "Nature and Bees". He plans to bring five to 10 hives onto the CERN site, and is keeping his eyes open for suitable swarms. No luck so far this year, as the heat has kept the insects from migrating to new nest sites.

But Blaise is undeterred. "We will prepare everything in winter in the hope of  a favourable spring in 2016 and a fantastic year of bee-keeping!" he says. "We're not doing it for the honey – it's to create a bee population to pollinate local plants. We want to show people that bees are important for our ecosystem."

Blaise's colleague and club treasurer Martial Laville shares his enthusiasm. "Many people don't know the difference between bees and wasps. I want to show them there's no need to be scared of bees; that these insects are important for the production fruits and vegetables – there's that ecological side that's really important."

Nestled between the Jura and Salève mountains, with a rich floral diversity in its untreated meadows and woods, CERN's sites present an opportunity for nature enthusiasts to get out there and explore life above the accelerators, beneath the trees.

More images of biodiversity at CERN