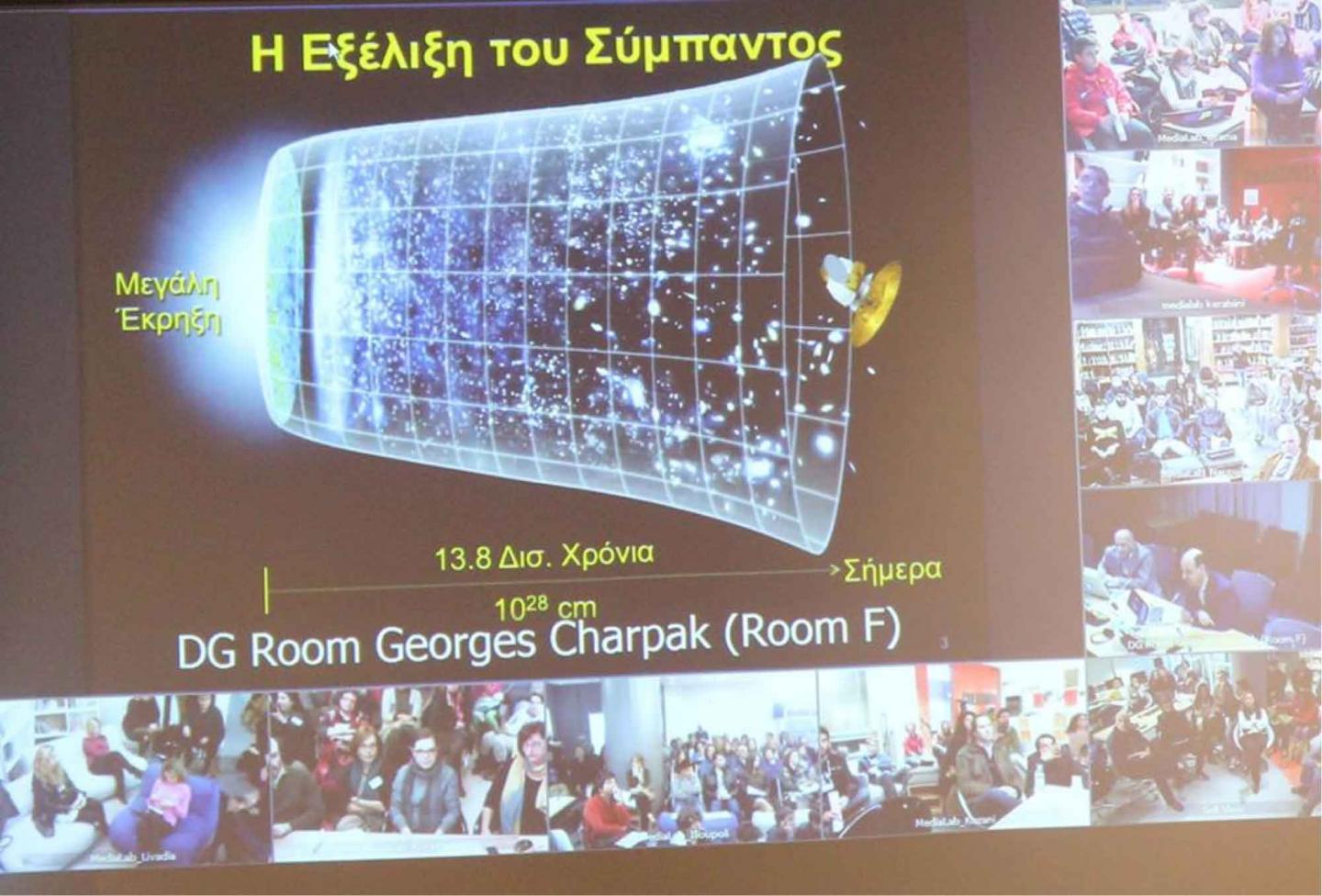 Participants in the nine Media Labs watch a presentation in Greek by Ignatios Antoniadis and Emmanuel Tsesmelis (Image: CERN)

Future Library is a non-profit organization funded by the Stavros Niarchos Foundation which aims to develop a sustainable network of public and municipal libraries to act as unique hubs for creativity, innovation and learning across Greece.

Over the last two years, Future Library with the collaboration of Google, Aarchus City Library and the Mozilla Foundation have been working on the creation of Media Labs in nine public libraries to reinforce their significance as knowledge, creativity and interaction-promoting centres. Within a Media Lab, people can get immersed in a range of creative activities such as producing a video, recording a song, creating a digital story and accessing exclusive digital content in an attractive and comfortable space. Library staff, trained by Future Library, support these activities by creating new youth-oriented services and working with people and organizations across their region.

To celebrate the official launch of the nine Media Labs in Greece, a special two-day Creativity Marathon took place on 6-7 December, marked by a series of virtual visits to CERN by the nine Media Labs. “The bridge between CERN and the Future Library initiative demonstrates the strong impact CERN has on local and regional communities towards a knowledge-based society”, says physicist Panos Charitos who initiated the CERN-Future Library collaboration. “CERN is interested not only in communicating science through the use of new technologies but also in enabling young people, tomorrow’s scientists, to reinterpret science and technology as creative, collaborative social processes,” he says.

During the two-day Creativity Marathon, more than 550 participants from various age groups and backgrounds, including physics teachers who had visited CERN in the framework of the Greek Teacher Programmes, had the opportunity to take a good glimpse of the latest developments from the laboratory. In interactive sessions with Greek senior and junior scientists from many locations in CERN but also from their local institutes in Greece, they learned about the upgrade work at the LHC and its experiments following the Higgs discovery, the GRID and its contribution to citizen science, the Invenio Digital Library software born at CERN and used world wide, as well as the role that CERN technologies and their applications play in improving everyday life.

"Participants were excited about the chance they had to talk to CERN scientists live," says Eva Anagnostou of the Future Library team. "Their feedback was very positive and encourages us to organize more events like this in the near future."

The CERN-Future Library collaboration will continue next year in the framework of activities organized in member and non-member states for the celebration of the Laboratory’s 60th anniversary.