Around 200 pieces of unique historic importance form CERN’s scientific heritage object collection. It is time to update and enrich it 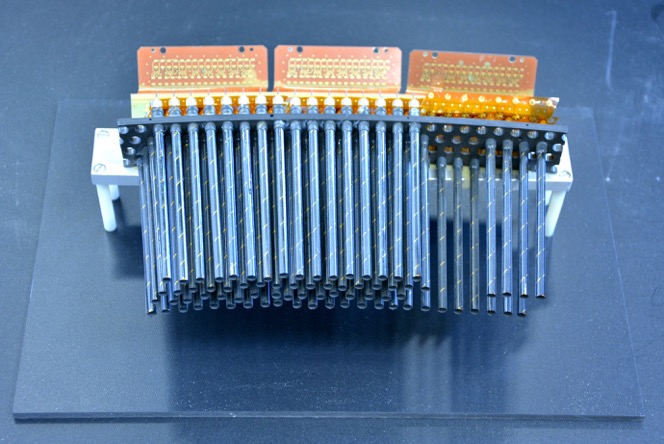 A piece from the CERN heritage object collection – a sample of the ATLAS transition radiation tracker, made of straw tubes. Filled with a gas mixture and threaded with a wire, each straw is a complete mini-detector in its own right. (Image: CERN)

Ever since its foundation, CERN has been constantly developing new technologies and putting existing ones to new use. The scientific heritage of the Organization is embodied not only in its scientific works, but also in its scientific instruments and other objects. In its 63-year-long history, many artefacts have been kept and still remain today to tell their story and to inspire current and future generations.

Around 200 pieces of unique historic importance form CERN’s scientific heritage object collection. It is being run by the Exhibitions and global engagement section of the Education, communications and outreach group, which provides appropriate storage and protection of the pieces and administers loans under guidance from the scientific information policy board (SIPB). A special database has also been created in CDS, with a complete description of the collection.

“In addition to their historical significance, objects of scientific heritage are increasingly valued as a means of disseminating CERN’s research to a wider audience. For a long time now our collection has been popularising CERN’s activities and achievements,” says Afroditi Anastasaki, currently working on a project to make a complete overview of the database.

Indeed, the collection has a worldwide impact. Recently 15 objects were borrowed by the award-winning Collider exhibition of the Science Museum in London, which went on an international tour across Europe, Asia and Australia.

Not only museums, but also user institutes of the CERN experiments often borrow objects to present the Laboratory’s work to the public. In March 2017 the Chulalongkorn University in Bangkok, Thailand, organised an exhibition to celebrate its 100th year anniversary.

Recently the exhibitions section initiated a project aiming to collect new objects, especially ones related to the LHC or belonging to the four large experiments – ATLAS, CMS, ALICE and LHCb.

“There are certain inclusion criteria. The object has to be created at CERN, for a CERN experiment, machine or accelerator, it has to tell an interesting story. It also has to be in good condition. Not all objects belong to CERN. We have pieces from ATLAS for example, which are owned by institutes participating in the collaboration. We only store them and take care of them. There is a strict procedure of arranging a loan to a museum and we always ask the owner for permission first,” explains Afroditi.

In order for an object to be able to delight and fascinate, it has to tell a good story. Unfortunately, the tales of some pieces have faded through the years and still remain unidentified. A list of these “mystery” objects can be found here.

If you have an object which can be included in the heritage collection, if you want to add details to any object’s description or if you were able to identify a mystery object, contact Afroditi Anastasaki. Help us tell CERN’s story even better!