The Esplanade des Particules in Meyrin

The Etat de Genève, CERN and the Commune de Meyrin announce the start of work on the Esplanade des Particules in Meyrin 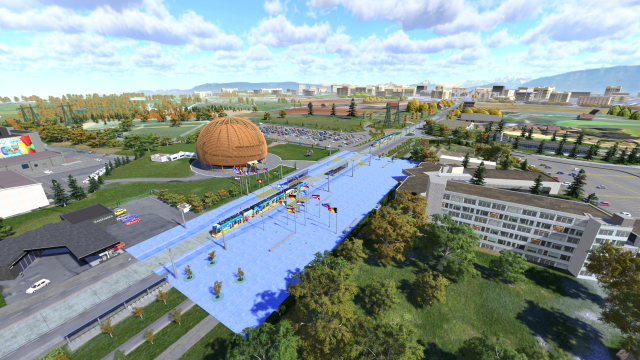 The Etat de Genève and CERN are today announcing the imminent start of work just outside the CERN site to create the brand-new Esplanade des Particules, a space worthy of Europe’s leading laboratory for particle physics. At the gateway into Geneva and Switzerland, CERN is already a top visitor attraction and enjoys global renown. The project will integrate the Laboratory better into the local urban landscape, making it more open and more easily accessible. Work will begin on 18 April and will last for a period of 16 months.

The idea for an Esplanade des Particules came jointly from the République et Canton de Genève, CERN and the Commune de Meyrin. A competition was launched in 2011 for a redesign of the Route de Meyrin intended to showcase the public entrance to CERN. The landscape architects Studio Paolo Bürgi of Ticino won this international competition with their design for a large space dedicated to pedestrians and sustainable modes of transport, connecting CERN’s Reception to the Globe of Science and Innovation, a symbol of CERN and of sustainable development, donated to the Organization by the Swiss Confederation.

In 2016, more than 120 000 people from all over the world visited CERN. In order to facilitate access for this ever-growing number of visitors, the Esplanade des Particules will be a public space aimed at sharing CERN’s creative and dynamic atmosphere, with local and international visitors alike.

40% of the project is financed by the Swiss Confederation in the framework of the urban development project and the remaining 60% is split between the Canton de Genève, CERN and the Commune de Meyrin. “As a cross-border international organisation, CERN embodies the spirit of Grand Genève and I’m happy that this project, which is worthy of this emblematic institution, is coming to fruition,” said Mr Luc Barthassat, state councillor in charge of the Department of the Environment, Transport and Agriculture.

“As with the Globe of Science and Innovation, which symbolises our desire to welcome the general public, the Esplanade des Particules will further demonstrate CERN’s openness to the city of Geneva and to the world,” said Dr Fabiola Gianotti, CERN Director-General. “We are looking forward to working with all of our partners to continue to develop the space around the Globe.”

“We are pleased to be participating in this project, which will increase CERN’s visibility in the local area,” said Mr Pierre Alain Tschudi, administrative councillor for the Commune de Meyrin. “This work is fully in line with Meyrin’s desire to create attractive and pleasant public spaces to help us all to live together in harmony.”

Impacts of the work on transport:

To know more, watch the video and the see the photos of the design.

All the updates will be published on CERN neighbours site.

ALICE’s wonders reach out to kids in Prévessi...

Celebrating with our neighbours