On the initiative of the Office National des Forêts, France’s forestry commission, horses are helping to remove trees cut down in CERN’s forests 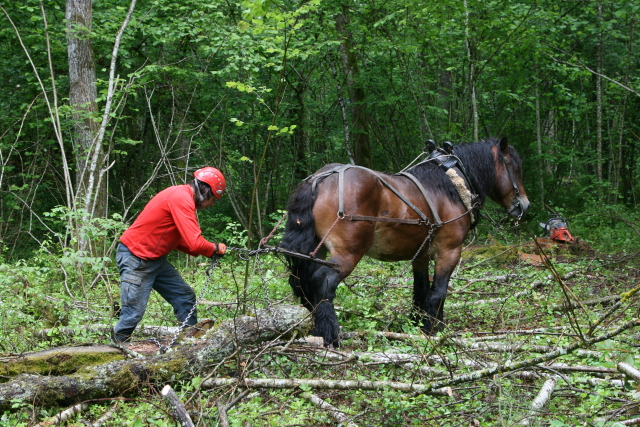 Django and Blues, two draft horses of the Trait du Nord and Ardennes breeds, have been brought in to help out in the logging activities in Prévessin. (<a href="http://cds.cern.ch/record/2159539?ln=en">Image: Erwan Le Marrec/ CERN</a>)

The CERN site covers 625 hectares, of which around 200 are fenced sites used for CERN’s research activities. The rest of the land consists of fields rented out to farmers and about 90 hectares of forests, mainly in France and managed by the French forestry commission, the Office National des Forêts (ONF), under an agreement with CERN signed in 2010.

This June, the ONF has decided to involve horses in the removal of felled trees from CERN’s woods in Prévessin.  As Florent Daloz, the logger entrusted with this activity by the ONF, explains, the use of horses to haul timber completely died out in the 1960s but resumed in the 1980s and 1990s, both in forests and in vineyards. Today, about fifteen horse breeders in the Rhône-Alpes region offer such services.

Horse logging is more environmentally friendly and more conducive to sustainable development than mechanised logging and can also be used alongside it. “This method allows us to cut down on the number of tracks needed for the machines, as the logs are hauled from the undergrowth to the forest tracks by the horses”, explains Erwan Le Marrec, the ONF forester responsible for CERN’s forests. “This reduces the impact on the forest floor and makes logging more acceptable to the public.”

Django and Blues, two draft horses of the Trait du Nord and Ardennes breeds, have been brought in to help out in the logging activities in Prévessin. They are guided by their owner, who prepares them for manoeuvres using voice commands that are then confirmed with a pull on the ropes.

The harvesting operations on the 11 hectares concerned will produce 74 m3 of oak logs of a quality suitable for carpentry and joinery and 150 m3 of oak firewood, which will be sold to professionals.

“What’s more, this ‘green’ approach to forest management adopted by CERN and the ONF is appreciated by the many people who go walking in CERN’s woods or use them for sporting activities”, says Mathieu Fontaine, head of CERN’s Green Spaces service.