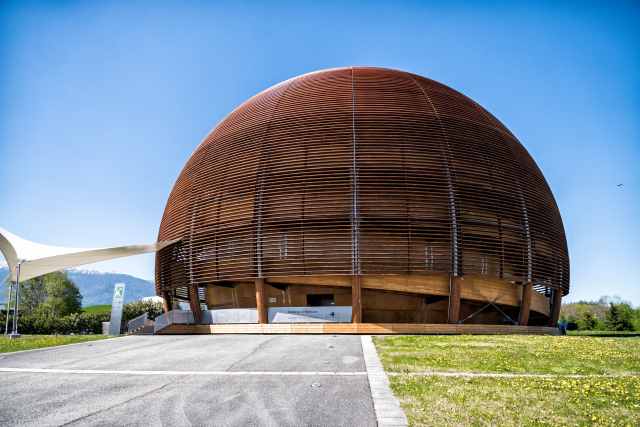 The Globe is a symbol of sustainable architecture. It is built from a variety of trees from Swiss forests that absorb more carbon in their lives than they release, meaning the building acts as a carbon sink. (Image: Sophia Bennett/ CERN)

One of the best-known symbols of CERN, the Globe of Science and Innovation, has been completely restored, meaning visitors now have even more to explore on CERN site.

Visitors to the Globe will now be able to see the free, permanent Universe of Particles exhibition, taking them on a journey deep into the world of particles and back to the Big Bang. This sits alongside the recently revamped, interactive, Microcosm exhibition – showcasing the full scale and wonder of CERN’s monumental experiments, such as the Large Hadron Collider, and the people behind them.

Designed by Geneva architects T. Büchi and H. Dessimoz, the Globe was initially built to house the Swiss national “Expo 02” exhibition in Neuchâtel. But it was rebuilt on its current site opposite the CERN Reception in 2004, where it hosted the official celebrations marking the 50th anniversary of CERN.

At 27 metres high and 40 metres in diameter, the building is about the size of the dome of Saint Peter's in Rome, meaning any renovation project had to be ambitious. The wooden slats that form the outer spherical structure of the Globe, the exterior ramps and the sun blinds – known as baffles – all needed replacing during the eleven months of civil engineering work.

To find out how you can see the Globe for yourself go to our new website for visitors, which has information on events being held, visiting the exhibitions, how to sign up to a free tour of the site and, for those who can’t visit CERN in person, a chance to visit the campus online using Google Street view.