Stay fit and have fun: Bike to work!

This June, CERN will take part in the Swiss "Bike to Work" campaign once again 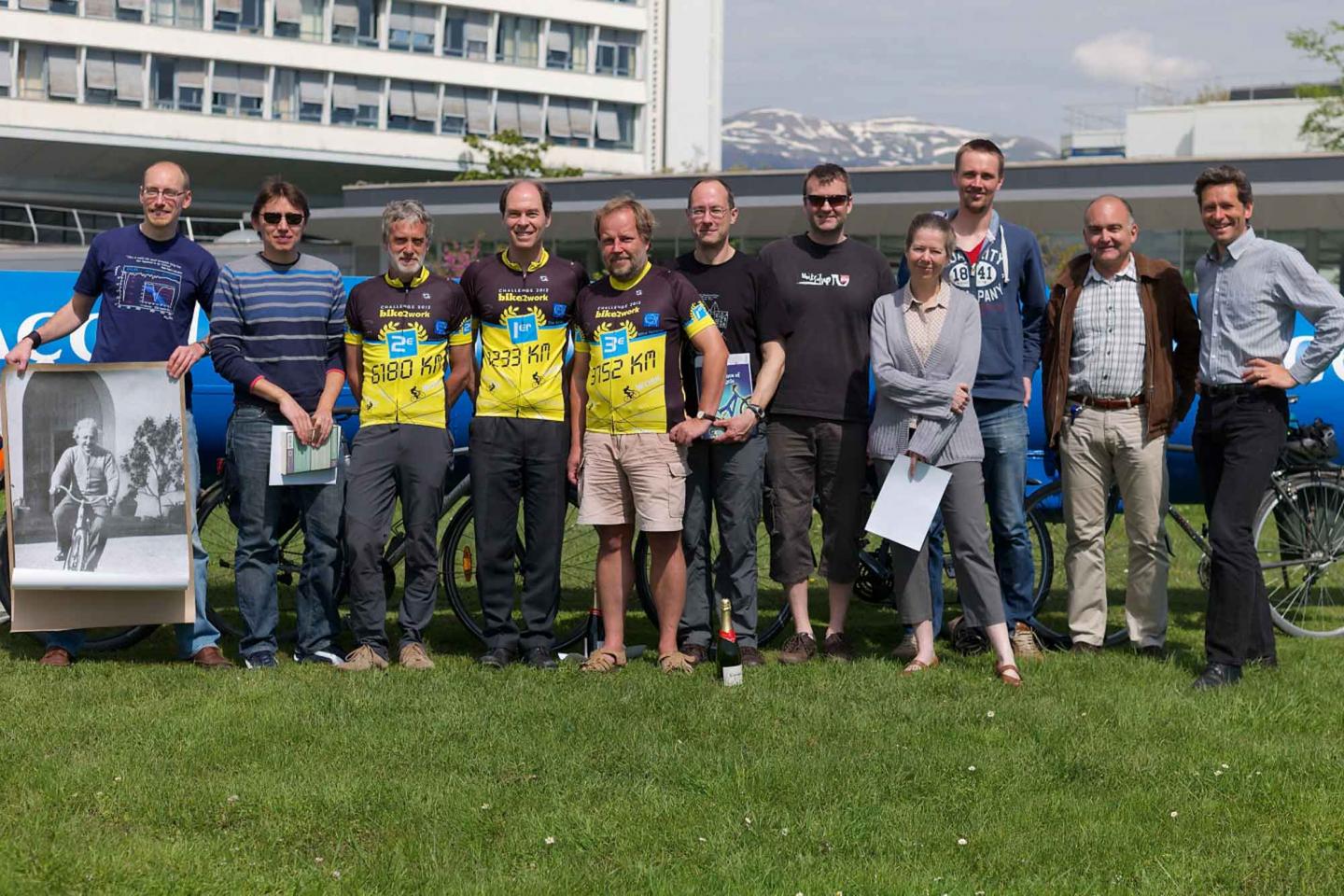 Participants of the “2012 Bike2CERN through the year” campaign - with the campaign winners, Tim Smith, Martial Dujardin and Mika Huhtinen - alongside the organisers and cycling enthusiasts (Image: CERN)

This June, CERN will take part in the Swiss "Bike to Work" campaign once again. In this Swiss national campaign, which has attracted more than 50,000 participants, teams of four colleagues encourage each other to cycle to work throughout the month of June.

Participants of the “2012 Bike2CERN through the year” campaign - with the campaign winners, Tim Smith, Martial Dujardin and Mika Huhtinen - alongside the organisers and cycling enthusiasts.

Participating is easy! Simply get together with three of your colleagues and register your Bike to Work team online before 31 May. There are no fees for registering teams, there is no minimum distance, and parts of the journey can be done using public transport. There is even an opening for non-cyclists: one member per team can be a pedestrian or a skateboarder or use any other means of transport that does not depend on an engine.

In addition to the June event, CERN is also supporting "Bike to CERN through the year" - an "unofficial" Bike to Work event. There were several prizes to be won last year, which were handed out at a recent ceremony, and a diploma was given to all contestants based on our very specific karma levels. We hope to get sponsors for prizes next year too, but in any case we can promise more karma to come your way!  Descriptions of both events can be found on our dedicated web pages.

Cycling is going mainstream! We encourage you to get in on the trend and join teams to take part in both the "Bike to Work" and the "Bike to CERN through the year" events.

Each participant will receive a CERN bicycle seat cover, custom made for the event. As if this weren’t enough, there are also prizes up for grabs for participants who cycle at least every other day. There are 20 working days in June, which means that just 10 days on your bike will be enough to take part in the prize tombola.

If you are looking for a team or members to complete your team, please consult this link.

If you took part in last year’s "Bike to Work" campaign, you are encouraged to split your previous team into two. This way we will have double the number of teams participating this year compared to last year.

There are obviously risks related to the use of bicycles and everybody, whether  a pedestrian, a cyclist or a driver, is responsible for reducing them. For those of you who are not regular bike users, you have until June to acquire the standard safety equipment. The HSE Unit is also on hand to advise you and to increase your awareness of safety issues. Remember that the route you usually take by car is not necessarily the shortest or safest route when you cycle. Information on cycle routes in the Geneva area can be found here.

On a practical note…

Fear of arriving at work all hot and sweaty is no excuse! There are shower facilities for men and women in the Pump Room (Building 216) and on the ground floor of Building 5.

Getting mobility on the right track