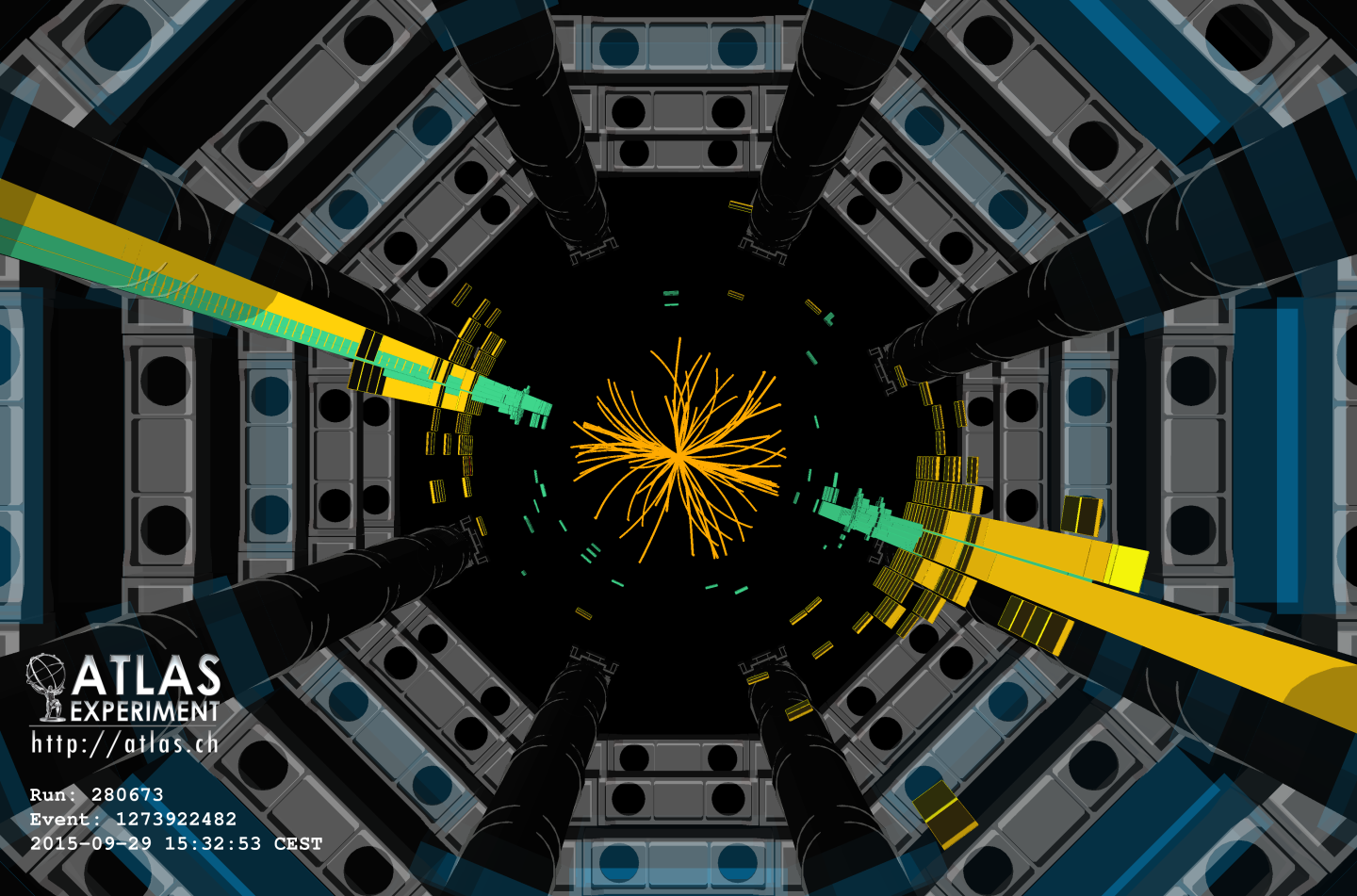 A 13 TeV collision recorded by ATLAS. The yellow and green bars indicate the presence of particle jets, which leave behind lots of energy in the calorimeters. (Image: ATLAS)

Particles circulated in the Large Hadron Collider (LHC) on Sunday for the last time in 2015, and, two days later, the two large general-purpose experiments, ATLAS and CMS, took centre stage to present their results from LHC Run 2. These results were based on the analysis of proton collisions at the previously unattained energy of 13 TeV, compared with the maximum of 8 TeV attained during LHC Run 1 from 2010 to 2012.

The amount of data on which the two experiments’ analyses are based is still limited – around eight times less than that collected during Run 1 – and physicists need large volumes of data to be able to detect new phenomena. Nonetheless, the experimentalists have already succeeded in producing numerous results. Each of the two experiments has presented around 30 analyses, about half of which relate to Beyond-Standard-Model research. The Standard Model is the theory that describes elementary particles and their interactions, but it leaves many questions unanswered. Physicists are therefore searching for signs of Beyond-Standard-Model physics that might help them to answer some of those questions.

The new ATLAS and CMS results do not show any significant excesses that could indicate the presence of particles predicted by alternative models such as supersymmetry. The two experiments have therefore established new limits for the masses of these hypothetical new particles. Advances in particle physics often come from pushing back these limits. For example, CMS and ATLAS have established new restrictions for the mass of the gluino, a particle predicted by the theory of supersymmetry. This is just one of the many results that were presented on 15 December.

The two experiments have also observed a slight excess in the diphoton decay channel. Physicists calculate the mass of hypothetical particles that decay to form a pair of photons, and look at how often different masses are seen. If the distribution does not exactly match that expected from known processes, or in other words a bump appears at a specific mass not corresponding to any known particle, it may indicate a new particle being produced and decaying. However, the excess is too small at this stage to draw such a conclusion. We will have to wait for more data in 2016 to find out whether this slight excess is an inconsequential statistical fluctuation or, alternatively, a sign of the existence of a new phenomenon. Find out next time: season 2 is only just beginning.