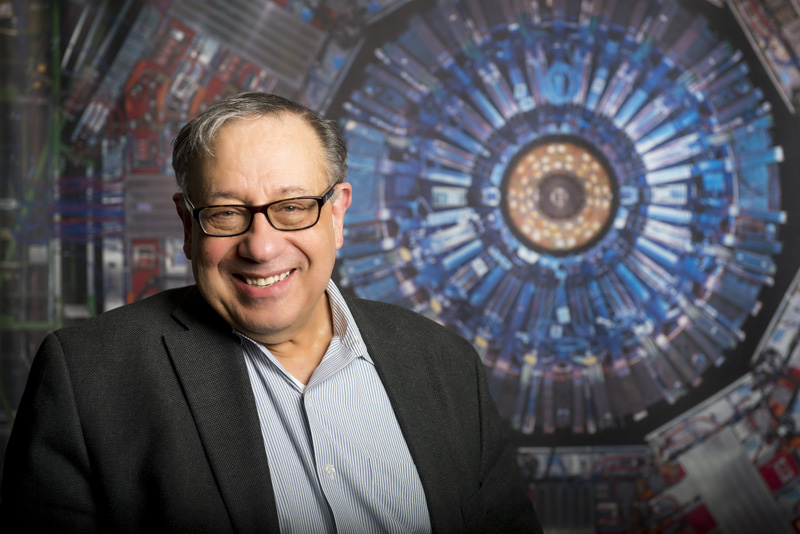 On 10 February, members of the CMS Collaboration Board, the “parliament” of the collaboration, held a ballot to appoint their next leader. The Board chose Joel Butler, who brings a wealth of experience – more than thirty years at Fermilab and more than ten of those with CMS – to this important management role, leading a collaboration of 3000 people from across the globe.

High on Joel’s priority list is making sure that all collaborators are able to participate in the collaboration’s research easily and to the best of their abilities: “We need everybody to be involved in CMS, whether they’re big or small institutions,” he says in his office in CERN’s Building 42. “We need to have the maximum engagement that we can get to handle all the tasks that we have because the task list is longer now than it’s ever been before.”

Prior to joining Fermilab, Joel earned a degree in Physics from Harvard University before pursuing a PhD in Experimental Particle Physics from MIT. Since joining the CMS collaboration in 2005, he has contributed to several endeavours, including the US efforts on the Forward Pixel Tracker and the upgrade project. He led the overall US participation in the collaboration from 2007 until the end of 2013.

When he takes over at the helm later this year, CMS will have moved its Run 2 data collection into a higher gear: “These will be years of tremendous opportunities and tremendous challenges. I think the opportunities are obvious: by the end of this period we’ll have close to 100 fb–1 of data. We should get the first 30 by the end of this year. It will be enormously exciting to see what nature has in store for us.”

While Joel has spent much of his career studying flavour physics, he prefers not to narrow his personal expectations of what CMS might discover over the coming years. “I’m a particle physicist, I want to go find out what’s there. I don’t have too many profound prejudices over what it should be. I think - I hope - we will see new physics soon. But even if we don’t find anything quickly, we still will have a long, long way to go. We have to continue to upgrade CMS and to cast a broad net out wide to try to catch what’s out there, because we really don’t know what the new physics might be or how much data we need to capture it, " he affirms.

“I think we’ve constructed a fantastic detector that’s very well suited to the physics that we’re trying to explore. That’s an extreme compliment to our founding fathers, who designed a great detector.” To ensure that CMS can continue this fruitful exploration, Joel points out that the collaboration has crucial technical tasks in the coming months, such as installing a new pixel tracker as well as new sensors for the Hadron Calorimeter over the next Year-End Technical Stop.

Joel takes the reins from a distinguished line of previous spokespersons. He has worked closely with many of them in the past and says he expects to apply what he has learnt from each of them when he starts his term. “I’ve been on the Management Board and the Executive Board as an advisor to all of them since I joined. The experience that our former spokespersons and many other people in CMS have had over the years is invaluable and had to be a guidepost to our future. We have to take advantage of that experience.” However, he is aware of the value of change: “Every successful organisation has to continually try to make successive improvements or it will essentially get stagnant. While CMS is enormously successful, there are things we can do better.”

Understandably, Joel is excited to take over his new role in a collaboration in which he has worked for a long time: “I think CMS is an absolutely spectacular collection of people that are really passionate and committed to doing physics. They have tremendous technical and analytical skills and are a pleasure to work with,” he says. “It’s a tremendous honour to be chosen to do this and I’m going to try to do my best for everybody.”