Kick-off for the 2017 LHC physics season

Data-taking has started again at the LHC: the experiments are continuing their exploration of physics at the unprecedented energy of 13 TeV. 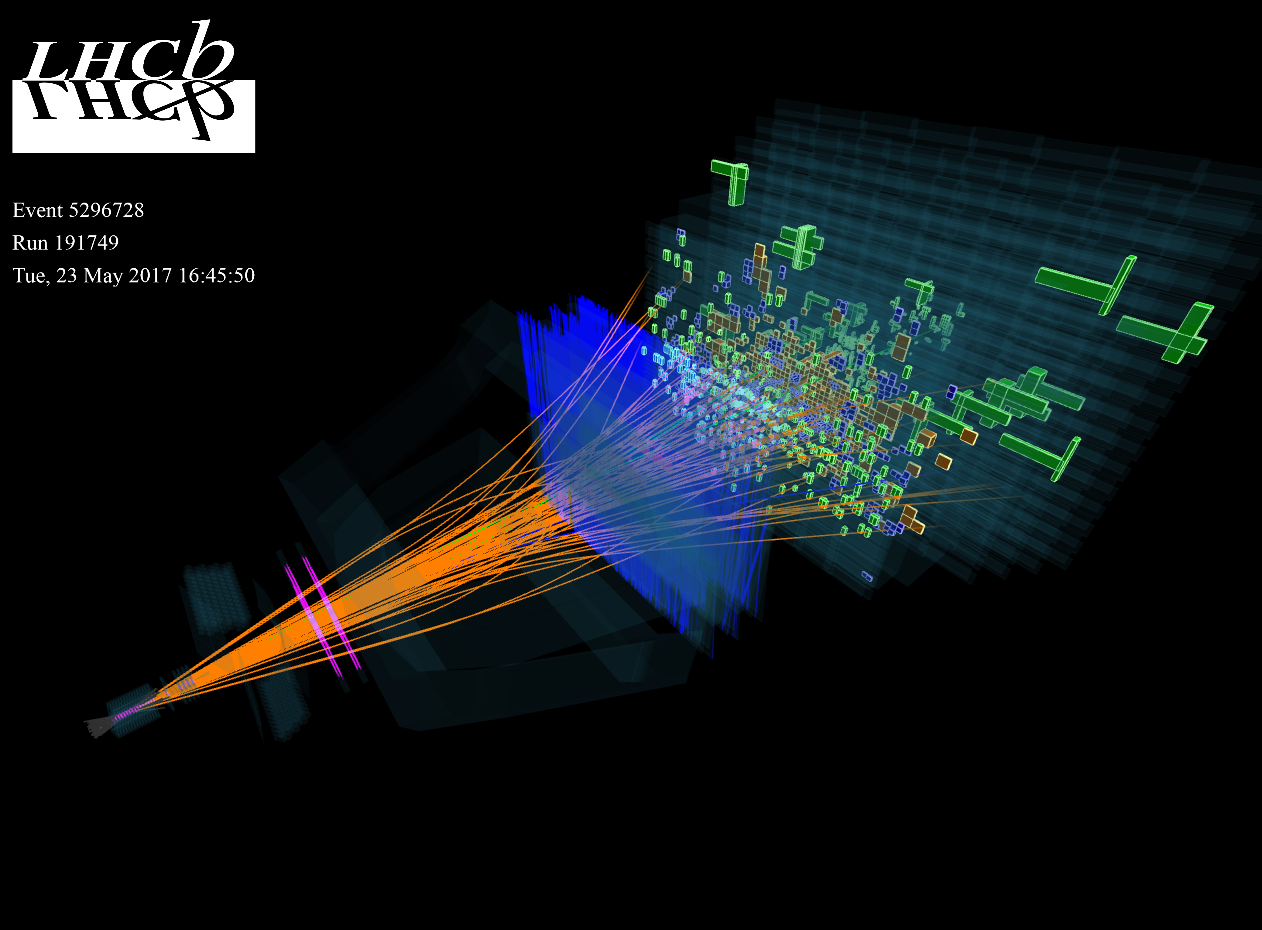 An image of a proton–proton collision taken in the LHCb detector on 23 May. (Image: LHCb/CERN)

Physics at the LHC has kicked off for another season. Today, the Large Hadron Collider shifted up a gear, allowing the experiments to start taking data for the first time in 2017. Operations are starting gradually, with just a few proton bunches per beam. The operators who control the most powerful collider in the world will gradually increase the number of bunches circulating and will also reduce the size of the beams at the interaction points. In a few weeks’ time, over a billion collisions will be produced every second at the heart of the experiments.

Last year, the LHC produced an impressive amount of data, no fewer than 6.5 million billion collisions, representing an integrated luminosity over the course of the year of almost 40 inverse femtobarns. Luminosity, which corresponds to the number of potential collisions per surface unit in a given time period, is a crucial indicator of an accelerator’s performance. In 2017, the operators are hoping to produce the same number of collisions as in 2016, but over a shorter period, since the LHC has started up a month later due to the extended year-end technical stop.

“Over the first two years of operation at a collision energy of 13 TeV, we built up an excellent understanding of how the LHC works, which will allow us to optimise its operation even further in the third year,” says Frédérick Bordry, Director for Accelerators and Technology at CERN. “Our goal is to increase the peak luminosity even further and to maintain the LHC’s excellent availability, which in itself would be a great achievement.”

Particle physics relies on the statistical analysis of various phenomena, so the size of the samples is crucial. In other words, the greater the number of collisions that reveal a certain phenomenon, the more reliable the result is. The experiments intend to take advantage of the large quantity of data supplied by the LHC to continue their exploration of physics at the highest energy ever obtained by an accelerator.

“The LHC experiments are well prepared to double their statistics compared to what they obtained in 2016 at 13 TeV. Thanks to the new data, they will be able to reduce the uncertainties that surround their observations every time we enter unchartered territory,” says Eckhard Elsen, Director for Research and Computing.

The LHC physicists are working on two different broad areas: improving their knowledge of known phenomena and probing the unknown. The known phenomena constitute the Standard Model of Particles and Forces, a theory that encompasses all our current knowledge of elementary particles. The Higgs boson, discovered in 2012, plays a key role in the Standard Model. It is also a scalar particle, fundamentally different to the other elementary particles. In 2017, ATLAS and CMS will continue to work on determining the characteristics of this particle. These two large general-purpose experiments will observe its decay modes and how it interacts with other particles. Their measurements may provide indications of possible new physics beyond the Standard Model. The experiments will also carry out precise measurements of other processes of the Standard Model, in particular those involving the top quark, the elementary particle with the greatest mass.

Physicists hope to be able to identify disparities between their measurements and the Standard Model. This is one of the ways in which the unknown can be probed. Although it describes a lot of the phenomena of the infinitely small precisely, the Standard Model leaves many questions unanswered. For example, it describes only 5% of the universe; the rest is formed of dark matter and dark energy, the nature of which are as yet unknown.

Every discrepancy with regard to the theory could direct physicists towards a larger theoretical framework of new physics that might resolve the enigmas we face.

ATLAS, CMS and LHCb measure processes precisely to detect anomalies. ATLAS and CMS are also looking for new particles, such as those predicted by the theory of supersymmetry, which could be the components of dark matter.

LHCb is also interested in the imbalance between matter and antimatter. Both of these would have been created in equal quantities at the time of the Big Bang, but antimatter is now practically absent from the universe. LHCb is tracking the phenomenon known as “charge-parity violation” which is thought to be at least partly responsible for this imbalance.

No lead ion collisions, which are the ALICE experiment’s specialist subject, are planned at the LHC this year. ALICE will continue its analysis of the 2016 data and will record proton-proton collisions, which will also allow it to study the strong force. On the basis of the proton-proton collisions from 2016, ALICE recently announced that it had observed a state of matter resembling quark-gluon plasma. Quark-gluon plasma is the state of matter that existed a few millionths of a second after the Big Bang.

Finally, several days of physics running with de-squeezed beams are planned for the TOTEM and ATLAS/ALFA experiments.

To find out more about physics at the LHC, you can watch our Facebook Live event on Wednesday 24 May at 4 pm CEST: