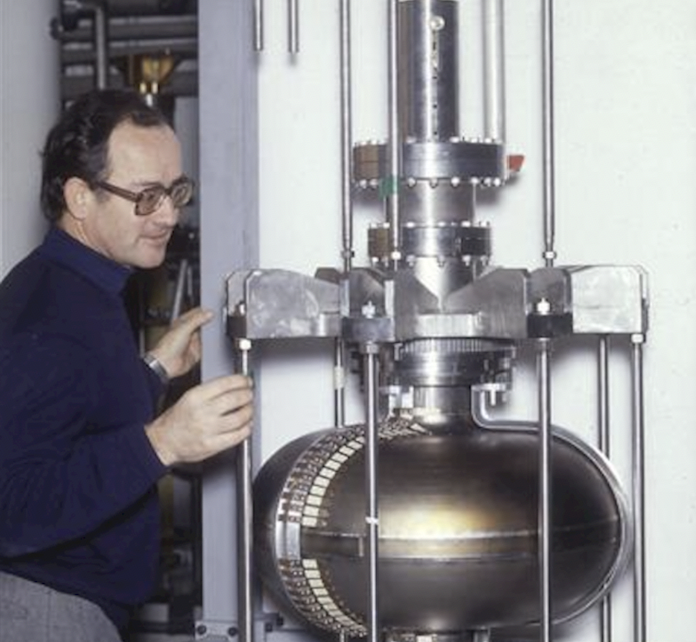 It is with great sadness that we inform you of the death of Herbert Lengeler, an experimental physicist who made great contributions to the development of superconducting radiofrequency (SC RF) cavities. Herbert passed away peacefully on 26 January 2021, in his home, only three weeks short of his 90th birthday.

Herbert was born in 1931 in the German-speaking region of Eastern Belgium. He studied mathematics and engineering at the Université Catholique de Louvain, in Belgium, and experimental physics at the Technische Hochschule in Aachen, Germany. He worked there as a scientific assistant and completed his PhD thesis in 1963 on the construction of a propane bubble chamber. He went on to perform experiments with this instrument on electron shower production at the 200 MeV electron synchrotron of the University of Bonn.

In 1964, he was appointed as a CERN staff member in the Track Chamber (TC) and Accelerator Research (AR) divisions. He was involved in the construction, testing and operation of an RF particle separator for a bubble chamber.

In 1967, he joined a collaboration between CERN and IHEP (in Serpukhov, Soviet Union), within which he led the construction of an RF particle separator for both IHEP and the French bubble chamber Mirabelle, which was installed in the same institution.

In 1971, the value of SC RF separators for improved continuous wave particle beams was recognised. This necessitated the use of SC RF systems with high fields and low RF losses. Since a development programme for SC RF had just been initiated at the Gesellschaft für Kernforschung (GfK) in Karlsruhe, Germany, Herbert joined that research centre on behalf of CERN. In the following pioneering period up to 1978, Herbert led the development of SC full niobium RF cavities operated at He-II temperatures, with all required auxiliary systems.

The success of the SC RF separator led to ambitious plans for upgrading the energy of LEP at CERN, which were initiated in 1981. A first SC cavity with its auxiliaries (RF couplers, frequency tuner, cryostat) was installed and successfully tested in 1983 in the PETRA collider at DESY in Hamburg. Following this, in 1987, an SC cavity with all auxiliaries and a new He-II refrigerator was installed and tested at CERN’s SPS. In parallel, Herbert orchestrated the development of niobium-sputtering on copper cavities as a cheaper alternative to bulk niobium. Gradually, additional SC cavities were installed in the LEP collider, resulting in a doubling of beam energy at the LEP by the end of its running period in 2000.

From 1989 onwards, Herbert gradually retired from the LEP upgrade programme and devoted more time to other activities at CERN, such as consultancy for SC RF activities at KEK (Japan), DESY (Germany) and Jefferson Lab (USA). In 1993, he was appointed project leader for the next-generation neutron source for Europe, the European Spallation Source (ESS), a position he held until his retirement from the project and CERN in 1996, at the age of 65.

Herbert was always interested in communicating his experience to younger people. From 1989 to 2001, he frequently gave lectures on accelerator physics and technology as an Honorary Professor at the Technical University of Darmstadt, Germany. In 1998, he was awarded an honorary doctorate from the Russian Academy of Sciences for his contribution to the CERN-IHEP collaboration.

Herbert was an enthusiastic musician. He had been married since 1959 to Rosmarie Müllender-Lengeler and the couple had four children and nine grandchildren.