Over one million followers reached in CERN TweetUp 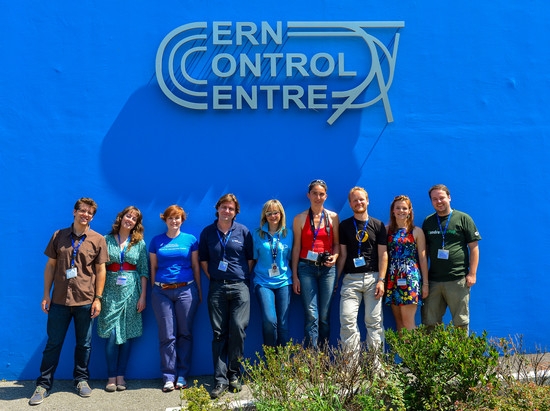 More than a million followers were reached on Twitter during CERN’s first ever “TweetUp”. On 25 July, 5 lucky Twitter followers, or "Tweeps" as they are known, visited CERN to take part in events held on the same day with the STS-134 astronauts. The Tweetup gave the online community a chance to ask questions and explore areas of CERN through the eyes of the tweeps, prompting over 1,000 tweets and re-tweets between them in 24 hours.

Five winners of a competition announced on Twitter were invited to come to CERN and spend a day behind the scenes, taking part in events organised to celebrate the AMS experiment that was launched in May 2011. The aim was to give tweeps the opportunity to explore CERN and share their experiences, allowing a two-way conversation between them and the online community.

The five winning tweeps, (pictured with representatives of ESA, CERN and KIT) came from a wide variety of backgrounds, with five different languages between them, a range of interests and an assortment of questions, and were able to reflect on their experiences in different ways.  The artist, photographer, science communicator, science writer and lawyer were able to cause a real stir among the Twitter community, prompting more than 5 million impressions of the #CERNTweetup hash tag.

They were given guided tours of the CERN Control Centre and Computing Centre, where they were able to relay questions asked through Twitter and then tweet the answers back. At the end of the day they attended the public lecture at which the STS-134 astronauts recounted their experiences on the AMS mission. The tweeps instantaneously broadcast quotes and comments, engaging still more people in what is happening at CERN.

After the event, everyone agreed that in order to make an even bigger splash, more people need to be invited to the next CERN Tweetup. The Twitter community can be an excellent tool for encouraging people to see the value and importance of science. With social media being one of the fastest-growing ways to reach a worldwide audience, this first CERN Tweetup was a first attempt at engaging this audience.