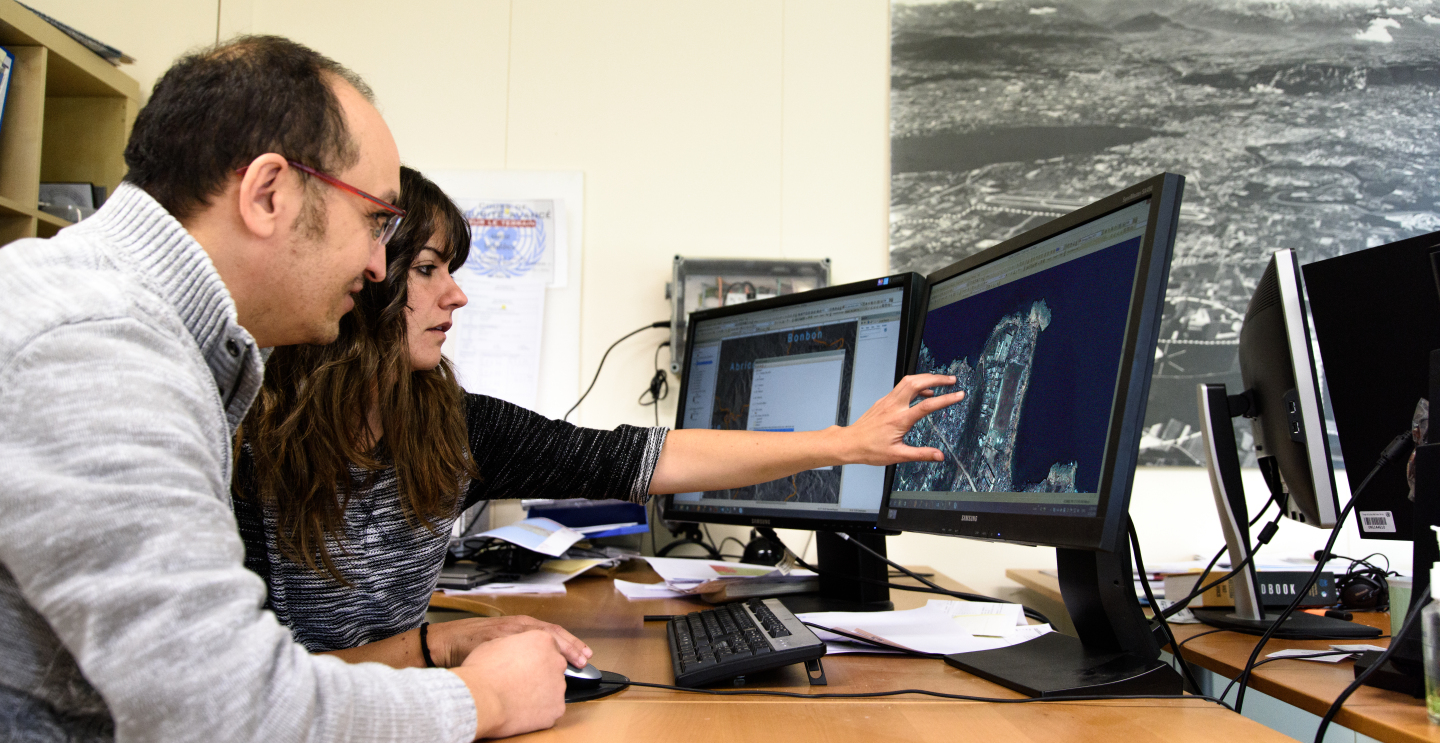 Members of UNOSAT work on satellite images of Haiti in October 2016 to assess the damage of Hurricane Matthew. (Image: Maximilien Brice/CERN)

UNOSAT has been hosted by CERN’s IT department since its inception in 2001, and relies on the Laboratory’s IT infrastructure to produce extremely precise maps of regions of the world affected or threatened by natural disaster or conflict. “The maps we produce are very high resolution, up to 30 cm,” says Einar Bjorgo, who manages the UNOSAT programme. “They are an essential tool for teams in the field arranging aid and sustainable reconstruction.” Thanks to these maps, UNOSAT has already helped guide emergency teams through various locations, such as in West Africa since 2014 in the fight against the Ebola epidemic, in Nepal after the series of earthquakes that hit the region in spring 2015, or at present in the context of the Syrian conflict or just this past week, in Haiti, to assess the damage of Hurricane Matthew.

To produce these maps, the UNOSAT team uses very high resolution satellite images made available by space agencies and public and private satellite data providers. These raw satellite images are stored on CERN’s servers and, thanks to the technology of the Worldwide LHC Computing Grid, are then transformed into legible, downloadable maps. “CERN’s support is essential,” adds Einar Bjorgo. “Without its powerful IT infrastructure, we wouldn’t be able to compile the satellite data we receive to make it usable.”

Over the years, the programme’s maps have become web-based and more and more dynamic thanks to daily updates and the addition of photographs taken in the field by UNOSAT agents and volunteers. “We have developed a smartphone application called UN-ASIGN, which allows people to take photos, geo-locate them and share them with UNOSAT,” explains Einar Bjorgo. “These images provide us with vital information and help us to evaluate the situation in the field.”

UNOSAT is now also collaborating with UNESCO on the protection of cultural sites, particularly in conflict zones. “When there is an armed conflict, it is difficult for UNESCO agents to get to cultural sites and evaluate their condition,” says Einar Bjorgo. “Our very high resolution maps allow them to get an initial overview of any damage.” In the framework of this collaboration, UNOSAT has already published several reports, notably on the condition of Syrian cultural sites.

The programme also plays a fundamental role in training government officials. For over ten years, UNOSAT’s four agencies, at CERN, N’Djamena (Chad), Nairobi (Kenya) and Bangkok (Thailand), have been providing training in the use of geospatial IT tools for various applications, such as risk management in the event of natural disasters, water management and town planning. “It is essential for every country in the world to be able to benefit from the tools developed by UNOSAT for development purposes,” concludes Einar Bjorgo. “This is enshrined both in the new sustainable development goals adopted by the UN and in UNOSAT’s own mission statement.”