ALICE, ATLAS, CMS and LHCb presented their key physics results at an end-of-year series of talks 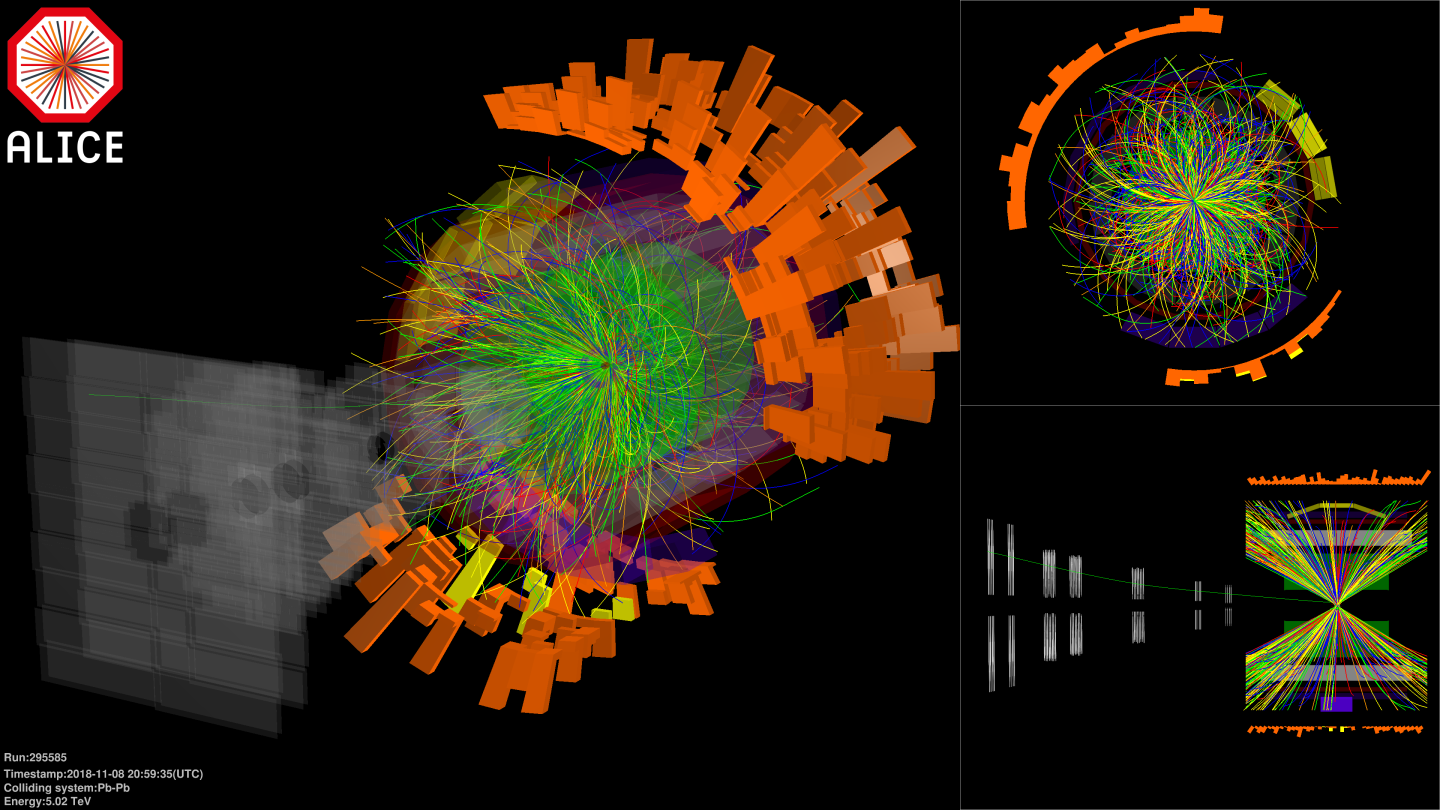 Particle showers in the ALICE detector during the first lead nuclei collisions of 2018 (Image: ALICE/CERN)

It has been a record-breaking year for the LHC, with the accelerator delivering over twice as much proton–proton collision data as it did in all three years of its first run. But while the experimental collaborations were eagerly collecting fresh data from the LHC, they were also busy analysing data they have gathered over the years, presenting many new physics results during the course of 2018. Today, young scientists from the four main LHC experiments presented the year’s highlights at an open session of the CERN Council. Below are a few of dozens of new results, which showcase the richness and diversity of the LHC’s physics programme.

The results from ALICE, the heavy-ion specialist at the LHC, focused mainly on studies of the quark-gluon plasma (QGP), a dense state of free quarks and gluons thought to have existed in the early universe. The LHC can recreate these conditions by colliding together lead nuclei. ALICE showed that the particle jets emerging from lead–lead collisions are narrower (more collimated) than those formed in proton–proton collisions, due to the way these particles interact with the QGP “soup”.

Comparing results with the Relativistic Heavy Ion Collider (RHIC) in the US, ALICE noted that the production of J/ψ mesons at the LHC was not as suppressed at low transverse momenta, concluding that the suppression caused by the QGP was countered by the recombination of charm and anticharm quarks into J/ψ mesons. They also observed that the ratio of Λc baryons to D mesons produced in lead–lead collisions was higher than in proton–proton and proton–lead collisions. This behaviour is expected if the charm quarks bind with other quarks in the QGP around them and form baryons and mesons. The dynamics of these processes will be studied precisely with future datasets that ALICE will collect in the next runs of the LHC. Furthermore, ALICE noted that this Λc-to-D ratio was higher than expected from theoretical calculations even in proton–proton and proton–lead collisions.

The LHC’s two general-purpose experiments – ATLAS and CMS – continued their examination of the Higgs boson that they jointly discovered in 2012. This scalar boson transforms into lighter particles almost immediately after it is produced, and by studying the various transformations, or “decay modes”, available to it, physicists can test the Standard Model of particle physics. This year, both ATLAS and CMS announced that they had observed the Higgs transforming into pairs of bottom–antibottom quarks for the first time. Although the Standard Model predicts that this decay mode is the most abundant, such bottom-antibottom pairs are produced in the LHC from a variety of processes, making it challenging to isolate those that come from the Higgs.

Since the top quark is heavier than the Higgs boson, nature forbids a Higgs transformation to pairs of top–antitop quarks. However, scientists can study their interactions by looking for instances where the a Higgs boson is produced along with a top–antitop pair, and ATLAS and CMS observed this “associated production” in data recorded in previous years. Both collaborations also highlighted their observations of the Higgs transforming into a tau–antitau pair, which was first reported by combining data from ATLAS and CMS.

Discovered over twenty years ago, the top quark remains a source of novel physics measurements and observations. Its mass is of particular interest, and ATLAS recently measured it to a precision of 0.3% – 172.69 ± 0.25 (statistical error) ± 0.41 (systematic error) GeV – by combining data in different channels. Meanwhile, CMS explored rare production modes of the top quark that are sensitive to signs of physics beyond the Standard Model. The collaboration observed the production of a top quark in association with a Z boson and a second quark (tZq), and presented evidence for the production of a top along with a photon and another quark (tγq).

Unlike the massless photon, the W and Z bosons can bounce or “scatter” off each other, and the probability of this occurring is affected by the presence of the Higgs boson. ATLAS presented their observation of such scattering of pairs of W bosons (W±W±→W±W±) as well as of a W and a Z boson (W±Z→W±Z), both with statistical significances of over five standard deviations. Future data will help measure this scattering with greater precision, as physicists look for deviations from predicted values. W and Z bosons can also help in searches for new particles, and ATLAS searched for instances in which extremely massive particles transform into pairs of these. Analysis of the data recorded by the detector ruled out the presence of specific types of massive particles up to 4.15 TeV.

Some extensions of the Standard Model propose the existence of an exotic Z boson, known as the Z′ (“Z-prime”) boson. CMS searched for such Z′ particles, but found no deviation in the data from the Standard Model’s predictions. CMS also searched for hypothetical particles known as leptoquarks, which are thought to be hybrids of leptons and quarks; the data did not show their presence. Other highlights from CMS included measurements of known Standard Model processes with improved precisions as well as novel studies in physics of B mesons.

Both ATLAS and CMS searched for many different signatures for the presence of dark matter and supersymmetry but found no evidence for their existence in the various parameters that were explored. These null results are crucial as they allow scientists to place stringent constraints on theoretical models that seek to explain gaps in the Standard Model.

The mystery of matter-antimatter asymmetry

Particle physicists are looking for possible solutions to explain why the universe is dominated by matter with almost no antimatter around. This asymmetry could be explained by differences in the way matter and antimatter interact with the weak force. The LHCb experiment was built to study these differences, known as charge-parity (CP) violation, and presented a variety of precision measurements at the session. LHCb measured several parameters associated with the so-called CKM matrix, which quantifies possible CP violation among quarks. In particular, the collaboration measured the angle γ with different methods, and obtained an average value of around 74°, making it the most precise measurement of this angle from a single experiment. They also presented the first evidence of the rare Bs meson transforming into an excited kaon and two muons as well as the best limits on the transformation of a B+ meson into three muons and a neutrino. Further, LHCb also highlighted new properties of the Ξcc baryon, which they observed for the first time last year.

LHCb also operated in fixed-target mode besides its regular collider mode by injecting noble gases such as helium into the beam pipe in between particle bunches that race around the LHC. The atoms of these noble gases served as stationary targets for the circulating protons, and LHCb was able to observe the production of J/ψ and D0 particles in these collisions as well as make the first measurement of the production rate of antiprotons in proton-helium collisions.

The LHC’s Run 2 came to an end earlier this month and the second long shutdown (LS2) has begun; but this does not mean that the collaborations go into hibernation! Indeed, the wealth of data already gathered will take many more months to be fully explored. And the detectors will undergo transformations of their own while collisions are suspended over the course of LS2. The LHCb detector has fulfilled its original mandate and will soon be overhauled completely, with every major subsystem getting upgraded or replaced. ALICE will be upgrading most of its subdetectors, aiming for greater precision in measuring particle tracks. CMS and ATLAS will similarly receive major modifications as they prepare for the restart of the LHC in 2021 and eventually higher luminosities from the High-Luminosity LHC in 2025. These upgrades will ensure that the LHC experiments can keep recording excellent data in the forthcoming runs and continue their searches for new discoveries.