We want your old tapes!

Don’t let CERN’s memory be erased! Bring us your magnetic tapes on the life of the Laboratory to have them digitised 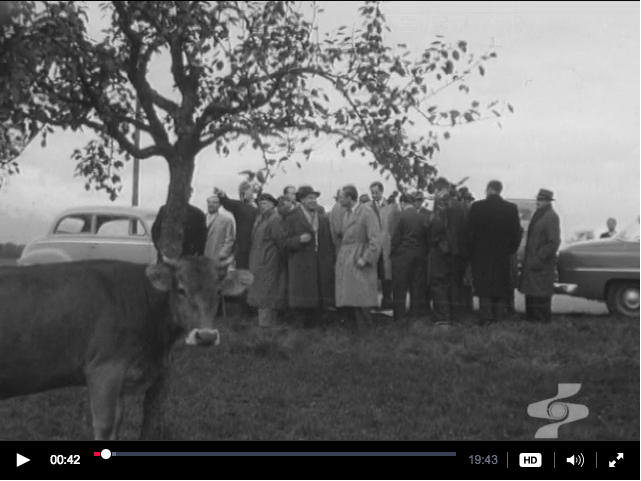 Archive footage from the swiss television dated back from October 1953. You can find this video on <a href="cds.cern.ch/record/1696828"> CDS</a> (Video: Cinémathèque Suisse)

CERN’s audiovisual archives, which consist of magnetic tapes and films, will be the subject of a special digitisation campaign in 2017. As time passes, these precious records of the Organization’s history are under threat of disappearing. The Memoriav foundation, which is responsible for the preservation of Switzerland’s audiovisual heritage, has agreed to finance a second life for these images of our heritage.

Since the 1960s, CERN’s audiovisual operators and experts have regularly produced films about the life of the Organization, the construction of the accelerators, results from the experiments, visits by celebrities and recordings of lectures given at CERN. Some of these gems, such as the first conference on the World Wide Web in May 1994 or the construction of the first proton collider, the Intersecting Storage Rings (ISR), in 1968, are hidden away in invisible collections.

In order to preserve these films for the long term, several thousand magnetic tapes (U-matic, Betacam, VHS, etc.) have been catalogued, ready to be digitised as efficiently as possible. Compressed video formats will also be created so that the films can easily be watched online. The films will enrich the video library already available on the CERN Document Server, as well as on the Swiss portal Memobase, which contains all of the heritage material preserved with Memoriav’s support.

During the cataloguing of CERN’s audiovisual productions, several films have been found “by chance” tucked away at the bottom of forgotten boxes! Original recordings might also be hidden in a cupboard in your office. If so, don’t wait for the colours to fade, for the sound to become inaudible or for “sticky-shed syndrome” or demagnetisation to destroy the content once and for all.

Contact video-digitization@cern.ch without delay to include your videos in the 2017 digitisation campaign!

Behind the scenes of the SPS’s 40th birthday